With the opposition in tatters, TRS led by KCR is all set to sweep Telangana in the upcoming Elections 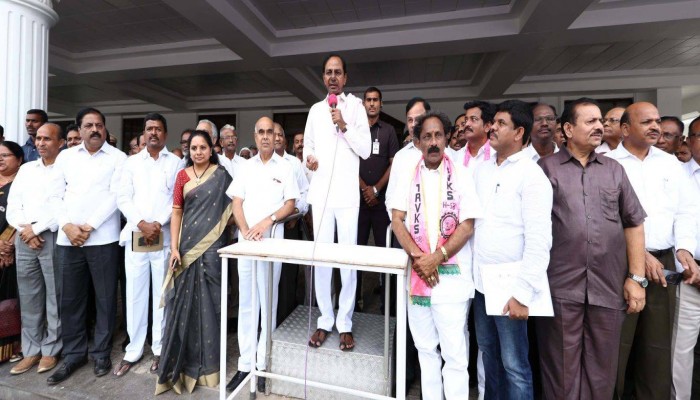 One of the biggest conundrums of Indian politics is the unpredictability of our political parties. Just days after submitting to the Law commission that the TRS party supports simultaneous polls to the Lok Sabha and state assemblies, Chief Minister KCR called for the early dissolution of Telangana Assembly! This also shows us why it will be near impossible to get anywhere closer to simultaneous elections, in the near future. However, this article is not about the concept of simultaneous elections!

Chief Minister KCR is riding a wave of popularity currently. The party has already scored impressive victories in various by-elections held so far too. Along with MLAs who have jumped ship from other parties, the TRS currently boasts of nearly 90 MLAs in the 119member Assembly. An earlier article details how TRS has increased its strength from 63 in 2014 to nearly 90 by 2016! There is no constitutional crisis in sight. No one has threatened the downfall of the government, nor have there been widespread protests – so the obvious question anyone would have is, why now?

For starters, KCR would want to very strongly delink the Lok Sabha and Assembly elections for the moment. The agenda setting would get so confusing, and potential allies at national level would pose a big problem if simultaneous elections are held. For example, TRS is so strong that they would not want to ally with anyone at the state level. But there is also this possibility that the BJP would want to ally with TRS for the Lok Sabha polls (KCR and Modi enjoy a cordial relationship). If simultaneous elections are held, this alliance cannot take place.

Secondly, KCR and the TRS would want to cash in immensely on the popularity wave they are riding on, currently. This is their best chance to decimate the opposition parties and establish a strong hold – the decision has not been a sudden on and has been on the cards from around April-May timeframe itself.

Now comes the next obvious question. Why is he so popular? Because he is solving the basic problems of Water and electricity for Telangana. Today, Telangana supplies 24 hour free current to agricultural lands! At one point of time, we were reeling under a severe power crisis and the turnaround has been nothing short of a miracle.

He has also put a massive focus on water, through two flagship programs – Mission Bhagiratha, that will supply drinking water to every home. KCR claims that 46% of homes already have this supply. When reminded about his promise that he will not ask for votes if 100% is not done, he shot back asking why the questioner is worried – if people don’t like it, they will anyway vote me out!

In addition to these there have been many programs that disbursed money to farmers, poor and the weaker sections. KCR infact is claiming that he has done things that he hasn’t even mentioned in the manifesto!

KCR and the TRS party were also blessed with another advantage – a heavily compliant media. I do not recollect any detailed articles in any regional media that had criticized any single policy or even utterance of the Chief Minister or the ministers. In fact the only time any uproar was seen when the government proposed to implement some law for using “harsh language”. I had even wondered that though Andhra Pradesh also has a compliant media, there is at least Sakshi channel run by the YSRCP. Anyone wanting to protest in Hyderabad were placed under preventive house arrest!

The opposition is anyway in tatters. Only the Congress party has shown a minimum semblance of being an opposition party. Even then, it is no position to win the state. The BJP, for reasons best known to local leadership, has not been as active as it should have been. This was a golden opportunity to grab enough opposition space at least. Meanwhile, KCR is all set to regain power by end of this year.