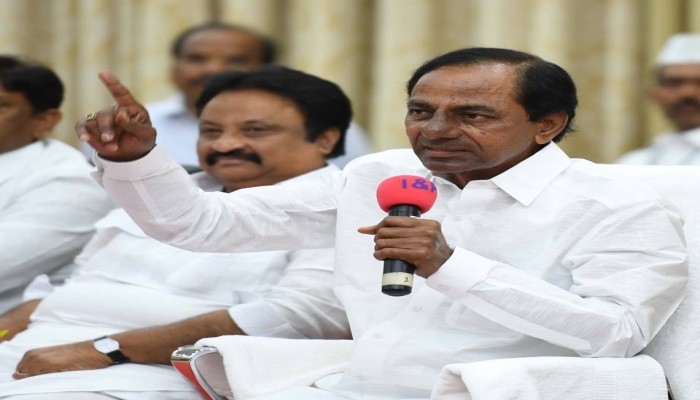 How you say, is as important as what you say. It’s one thing to read in newspapers or web portals what  leaders say; it’s another to hear them say it. That is why Rahul’s speeches might sound good when you read it, but appear downright silly when you hear it. But then we are digressing. This article is not about Rahul Gandhi!

For few days now, Telangana CM KCR has been making national news. He addressed a press conference first, on Saturday March 3rd, and said that he is willing to take the lead in the formation of a “front” that will be an alternative to the Congress and the BJP. On Sunday, March 4th, he addressed general public that came to his house to congratulate him on becoming “desh ka neta”.

I heard the speech and was astonished at the level of hatred KCR has suddenly developed towards the central government. The topic of devolving more powers to the states is certainly worth debating, but as I said in the beginning - How you say, is as important as what you say.

It’s not like KCR doesn’t know the situation in the country when PM Vajpayee introduced Pradhan Mantri Gram Sadak Yojana. It’s not like he doesn’t know that many state governments weren’t even building such basic infrastructure for villages in their states. It’s not like he doesn’t know Naxal infested states needed this infrastructure push to enhance their connectivity. He knows all this – yet he chose to attack the Central government on a scheme that has benefitted the states, with little burden on them. So, when he shouts “Rajya ka Sarkar nahi hai? Kya wo log nahi bana sakte?”, he is doing nothing but indulging in pointless and loud rhetoric.

This is not the only scheme on which he tried to attack the Central government. He was showing his ire against the Congress and BJP for not allowing true federal structure to exist. Quite funnily, he asks us what has BJP done in the past 4 years? He tells us that they did nothing. Elsewhere he tells us that ours is now a power surplus country but still there are areas that reel in darkness.

The answer to his question in 2018, was given by KCR himself in 2016. In a public meeting, he heaped praises on the Prime Minister for effective federalism that was put in place. He heaped praises on the then power minister Piyush Goyal for helping solve the dreadful power situation in Telangana. It is thus baffling to understand why he launched this attack, and chose topics like these. Does co-operative federalism change so drastically in under 2 years?

He demanded that Health, Education, Agriculture and Urban Development be given to state governments. Health is a concurrent subject. Nothing in the constitution prevents KCR from improving health facilities in Telangana. Irrespective of the facilities and hospitals the central government will build, KCR can go on his own and build world class infrastructure for health. Is anyone stopping him?

Education is a concurrent subject. Nothing in the constitution prevents KCR from improving educational facilities in the state. Instead of asking “aapko school mein kya kaam hai”, he can focus on cleaning up the mess in state education sector. We can pick examples if needed. In 2016, there was a paper leak for EAMCET. Till date, that investigation has not been completed. There has been no change in syllabus at any level of education all these years. Did anyone stop him for bringing in the changes? KCR, in an admirable decision, suspended the license of nearly 150 engineering colleges, thereby plugging the loophole in a big scam. Did he need anyone’s permission to do that? Why then this heartburn on Education now?

His oversimplification of farmer’s suicide came as a massive surprise to me. He asked why farmers are committing suicides even after 70 years. In the context of his speech, was he blaming the concurrent nature of the subject to be the reason for this? If KCR accuses Modi of not doing anything for 4 years, then shouldn’t KCR also take responsibility for farmer suicides in Telangana? Was there really nothing he could do about them?

His tirade against Urban Development is surprising too. The center doesn’t have absolute control on Urban Development. The Greater Hyderabad Municipal Corporation (GHMC) earns a lot of money through taxes, and yet has failed to provide good roads in the city. KCR himself has told us "If the government were to begin taking action against corrupt staff, then no one will be left in the GHMC. "Correcting GHMC is entirely in his hands – no central government is stopping him from taking up reforms.

He attacked the way NREGA funds are released – “Should we wait for Delhi to release funds even for labourers?” was his rhetoric. Well, it’s a central scheme, so the center  will release funds! Is his contention that such a program shouldn’t have come up in the first place? Or is his contention that since such a program has come up, release of funds should be left to the local body?

He followed this up with asking if this is how local bodies are sought to be run in the country. Later, he says that many laws regarding panchayats were bought and they were useless. Recently, KCR himself set up Rythu Samithis at village levels. These samithis are supposed to take up all land related problems in the village and solve them. There was widespread criticism that these samithis were filled up with TRS supporters/members. He didn’t care much about this criticism. Perhaps he likes to have this unlimited power.

KCR started his speech with asking how long these Delhi parties Congress and BJP will continue to divide people based on religion? Funny, coming from KCR, who for example, has two names for the same scheme – Kalyana Lakshmi and Shaadi Mubarak. Both schemes do the same thing, Rs 75,116/- to families of poor SC/ST girls and Muslims respectively. I agree with his larger point though – this country was sought to be divided on communal and caste lines, majorly by the Congress party. How will a third front solve that problem – one really doesn’t know!

Devolution of more powers to the states is a very important topic, that needs to be debated threadbare. It requires level-headed discussions and a major change in the constitution. A major change in the constitution requires greater support across the political spectrum. That support cannot be garnered by going combative on day 1. I, for one, feel that the tone of KCR’s speech didn’t set the right forum for this debate.