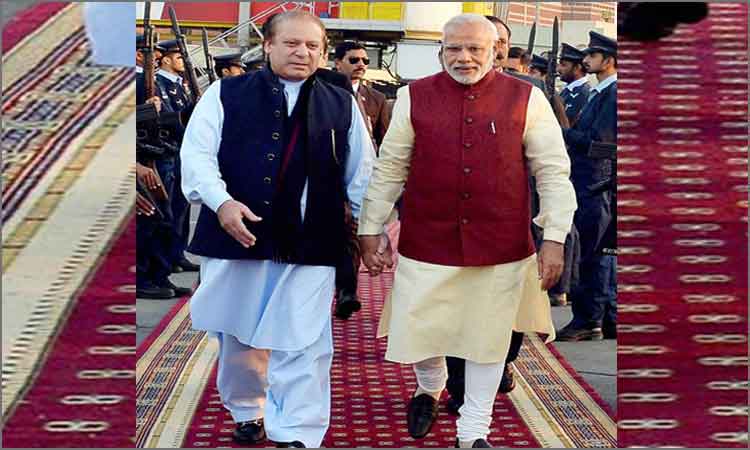 Prime Minster Narendra Modi made a surprise stop over at Lahore on his return to India from Kabul to meet Pakistan Prime Minister Nawaz Sharif in an effort to renew engagement with Pakistan. The element of surprise and secrecy is a continuation of the pattern started by his National Security Advisor Ajit Doval and his External Affairs Minister Sushma Swaraj. The genesis of the engagement began when the government invited Prime Minister Sharif along with all the neighboring countries for the swearing in ceremony of Modi. Despite later hiccups, the government showed the resolve to sustain the dialogue.

In normal diplomatic initiatives, the foreign offices in consultation with the leadership talk and come to agreements and the leaders meet to sign them and ceremonies follow with bonhomie and protocols. However, Indo-Pak meets are always filled with speculations, 24x7 media attention, leaks, and rumors with soap opera style coverage.  Maintaining such secrecy about the Lahore visit until the last minute is commendable irrespective of the background work that was going on since the NSAs meet at Bangkok and the later visit by Sushma Swaraj to âHeart of Asiaâ meet. The meeting was a shock and a rule breaker in every aspect of Indo-Pak meeting expectations. This surprise visit for many watchers was like President of United States visiting Iraq or Afghanistan unannounced. Delhi's celebrity chatter-boxes and media are used to getting excited even at the hint of the Indo-Pak talks, as this means all the hugs, free food, travel, gossip and alcohol. The world is used to seeing the dramatization of Indo- Pak engagement live on TV, while mostly the useless talks go on. Modi has truly given Media shock and awe at every stage possible. This is serious engagement with no drama. Usual expectations about Indo-Pak talks is around how the warring countries will buy peace, will there be talks about terror, will there be a movement around resolution of Jammu &Kashmir and will there be cricket matches? This was the comfort zone of talks even if there is no progress.

The world has changed with respect to India and Pakistan and the talks can never be the same. The agenda and talks before 2002 has no bearing anymore to those that are occurring after 2002. The Operation Parakram and the events after changed the Indo-Pak dialogue permanently. However, some delusions continue in certain quarters of Pakistani establishment such as its Army, ISI and also those involved in people to people contacts plus the mainstream media. Perhaps these delusions are because of a hope that things can be rolled back to pre-2002 levels.

Situation before Operation Parakram of 2002

Pakistan is a nation that is fundamentally built as a separate country for Muslims of Indian sub-continent. If Islam is not the core value of that nation then there will be no reason for its existence or there will be no reason for it to bind (Sindh, Baluchistan, Pathans, Punjab and the occupied portions of Kashmir) together. Fundamentally, irrespective of economic development or any other factors that any nation needs, if Pakistan moves away from its core value of Islam then the fissures will engulf it. Sub-nationalism will assert itself as in rest of the modern world.

This urge of separate state for Muslims, with Islam as core value and also its geographical location of being a transit from Central Asia to India and the Indian Ocean made this country a very attractive for the Western powers. Controlling this corridor is strategically important to stop Asian rise of Russia+Central Asia + India together. Apart from the geographical aspect of the geopolitics, Islam as a core value of Pakistan has given the Western powers (primarily United States) a useful tool to control and dominate the geopolitical space in this area so that the Asian economic dream can be delayed and further perpetuate their shaky dominance

The mantra is Islamism of Pakistan as a tool that will help Pakistan to be united and low cost mercenary armies that can be launched anywhere and in this process have plausible deniability. In this pursuit the strawman of âIslam khatre main haiâ and a Jihad is needed to rescue Afghanistan from Russia, Kashmir from India and Palestine from Israel is created. US openly trained and funded most of these armies as any tell all biographies of their retired officials boast.

For Pakistan this was God sent opportunity as it can keep its frictions in control and is a win-win for both Pakistan and United States for their individual goals. In the process India had to face the terror in 1980s and 1990s. As everyone sensed that a possibility of India repeating 1971 loomed over the horizon, the stakes have been raised by clandestinely transferring Nukes to Pakistan along with delivery systems (F-16s and missiles). As finally the Indo Pak theatre has become Nuclear, India was asked to show restraint from taking action.

One fundamental outcome is Pakistan has become more radicalized towards Islamization. It has become worldâs biggest factory of terrorists. If anyone gathers news of terror between 1995 and 2010, the greatest percentage of terrorists who are either caught or died had links to Pakistan. In fact, the latest cold blooded attack in California, US, was done by a family of Pakistani immigrants. There is a factory of terrorists in Pakistan that is churned by its armed forces. In 1990s when Indiaâs COIN (Counter insurgency) operations in Jammu and Kashmir were going on in full swing, the military used to either would find terrorists from Chechenia, Tanzania, Yemen and others apart from Pakistan and Afghanistan in Kashmir. That tells us how deeply and effectively the factory model was implemented.

As things progressed in this fashion, the Jihadi factory of Pakistan extended deep into Afghanistanâs Pashtun areas which has global ambitions of even attacking USA. Until 9/11 the US was looking at a list of achievements of these armies generated out of the factory. These are used across the globe wherever a country is not following the diktats of prescribed new world order. The whole thought process was that this will never reach the shores of United States. The loss of few US citizens or uniformed ones is something of a small sacrifice when compared to the rich results that are being achieved using these forces.

For Pakistan, not just unity of its nation, but also has created what they called âstrategic depthâ inside Taliban based Afghanistan. In the process this has created a massive model of armed forces industrial complex. The ISI and Armed forces all enjoyed massive business in this model of Pakistan as global terror factory with slush funds from Afghan drug sales, United States free aid and several such artificial wealth making complexes. All this is about killing and bombing people assets around the world but primarily focused on India.

The options for India are meagre to face this massively funded terror factory by globeâs sole super power. On one side India was still struggling to grow as an economy in 90s while Pakistan freely released the graduated terrorists from its factory. In the limited options that India had, it stuck to Shimla agreement at a diplomatic level to whoever was aggressively asking India to make compromises. Fundamentally using terror and Nukes as threats, India was asked to give up Kashmir.

While taking on the diplomatic aggression, India has put a plan of defense in the form of better COIN operations, more security forces, and commando operations to fight the factory output of Pakistan. For every loss of security person, an x number of terrorists got killed.

It is a âwar of attritionâ game where Pakistan has to sustain factory output with Islamism as core. India has to keep finding and killing the terrorists. The world powers play their own game of warning about nuclear showdown and all kinds of Armageddon theories to force India to compromise. The hope for Pakistan is to keep the low cost Islamism motivated jihadi war going on and wear out India. For India it was to keep it as low cost defense until it has achieved its vision of economic power and with a hope a better sense will prevail as a human suicide bomber is not sustainable for too long as the results wonât be any visible.

For United States and China, this is a pretty win-win situation as India a potential economic power gets bogged down and in addition the factory output can be used against Soviets, Indians, and any conflict that can be spun as something against Islam. Everyone has plausible deniability.

But then an event happened that changed the history. This event was called  9/11. Now there is a realization that whatever happened to India between 1980 and 2000 can now happen anywhere in the world. The Pakistani factory output is now in reality like an âarmy of Orcsâ from the famous movie Lord of the Rings (LOTR). This could go out of control and they can become smart and have the abilities to bring down key assets of world powers. Someoneâs good terrorist can be bad terrorist for others. The mood of the world powers is to contain this but who will like to lose the geopolitical advantages of this factory. In the midst of this predicament, Indiaâs nuclear tests, Kargil war and attack on Indian Parliament happened. Then the Operation Parakram happened in 2002. This event has changed this âwar of attritionâ

The terror incidents, reactions and responses during this period led to a different political situation in the domestic India. The terror obviously will use the sleeper cells of Islamism inside India. The parties that pander to these vote banks want to go slow on the conviction and operations and the others want to go aggressive. Those who want to go slow have deeper connections to the sleeper cells and their handlers. A mafia of âAman Ki Ashaâ types has formed and using the connections, some of the political/underworld and other elements may also have colluded with Pakistan and orchestrated the terror attacks at times. In two decades, the Indian subcontinent has become a money making venture of terror factories based on Islamism with nexus between corrupt authorities, politicians and a thriving underworld mafia.

Except for the dying security forces and common citizens of India, overall this setup of âwar of attritionâ helped United States and China in their geopolitical goals, helped Pakistan in having unity. For Pakistani elite/army, Indiaâs âsecularâ brigades and the joint underworld minted money. The illegal cash, drugs and money laundering went on and on.

A balance was created using some deaths of security forces and citizens while the concerned India was looking for a break to change the course.

Acknowledgements: I am indebted to interactions with numerous members of http://forums.bharat-rakshak.com/ for over a decade.