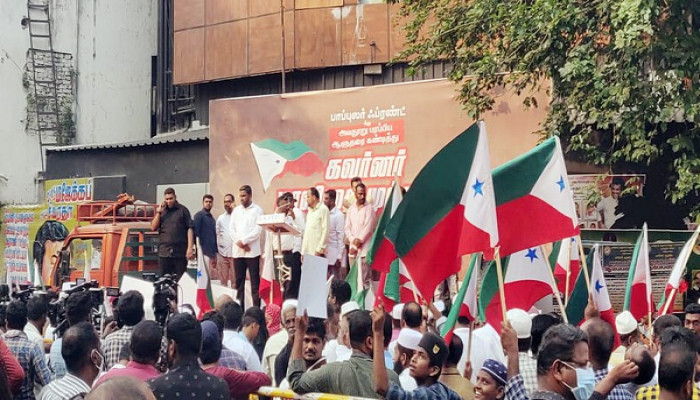 The Kerala police on Monday said they have launched a preliminary investigation into a purported video in which provocative slogans were being raised by a minor boy during a march by the Popular Front of India (PFI) at coastal Alappuzha.

A short video of a boy sitting on the shoulder of a person during the “Save the Republic” rally held by PFI on May 21 here and raising allegedly provocative slogans that went viral on social media. The boy allegedly raised slogans against Hindus and Christians.

Taking serious note of the incident, police said they have launched a preliminary investigation into it.

“However, no complaint has been received so far and no case registered yet,” police said.

In the slogans, the boy was heard exhorting people to keep rice and puffed rice (usually used during Hindu cremations) ready at their homes. He also urged keeping incense (used by Christians during funerals) ready at homes. “Here comes your kalan (personification of death). If you live with courtesy… you can live here. Otherwise… we know what to do,’’ the boy was heard saying.

The police’s special branch in the district said the hate speech was under their scanner. “We have noticed it and verified that the boy had raised the slogans during the PFI rally held in Alappuzha on Saturday. We are trying to identify the boy to find out who made him make such provocative slogans,’’ a police source said.

The provocative sloganeering by the child evoked criticism from various quarters.

Meanwhile, the PFI, in an internal note, which was made available to the media, said such slogans were against the policy of the outfit and would look into the matter.

“We have given approved slogans which were to be raised in the public rally at Alappuzha. Thousands of party workers and others joined the rally protesting against the RSS. The visual of a boy raising slogans came to our notice now. Those slogans were not approved or given by the organisers of the rally. It’s not the policy of the organisation to provoke or raise provocative slogans,” PFI State secretary C A Raoof said.

Raoof said steps would be taken to avoid such shortcomings.

Hours before the PFI rally, Bajrang Dal workers took out a “shaurya rally” in Alappuzha raising slogans that “the country cannot be handed over to anti-nationals and communalists”.

Last year, Alappuzha witnessed back-to-back killings of a State leader of the Social Democratic Party of India (SDPI), the political wing of the PFI, and a State BJP leader within 12 hours.