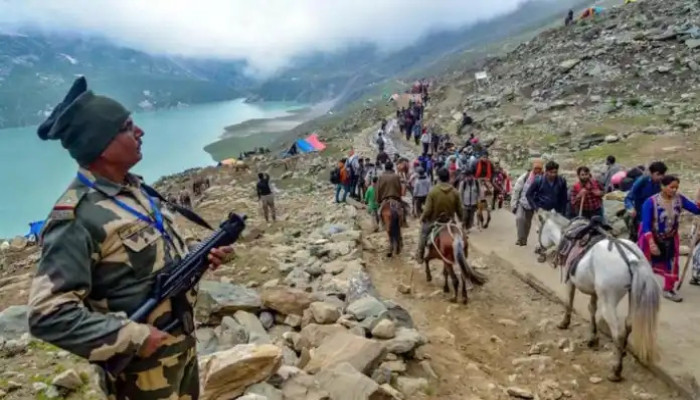 Ahead of the start of the holy Amarnath Yatra at the end of this month, a Lashkar-e-Toiba related terrorist outfit has issued a threat. The Resistance Front or the TRF, which has claimed responsibility for several attacks in the valley, including those targeting Kashmiri Hindus, has accused the Central government of provoking sentiments in Kashmir.

The threat letter was issued Sunday and accused the government of using the religious yatra for political reasons in Kashmir.

The outfit said anyone including pilgrims supporting or giving shelter to RSS people in the name of the yatra will be targeted.

"Don't become scapegoats like Kashmiri Pandits and don't get provoked by the fascist regime's saffronisaton talks," the TRF warned in the letter.

The letter referred to the government as “fascist,” and stated that they are exploiting ordinary people for their evil schemes. It stated, “They used Kashmiri Pandith’s for their vote bank and results are in front of everyone. And now they are going to use Amaranth Yatra for their dirty politics. From mere 15 thousand to 8 Lac pilgrim registrations and from 15 days to 80 days is just to provoke the sensitivity of Kashmir situation…”

“We at #TRF are not against any religious matter but when such religious institutions are used against Kashmir struggle then it becomes our concern to take such matter in our hand,” the letter further added.

Threatening to disturb the Amarnath Yatra, it stated, “We want to make it clear if this Yatra is used for political and demographic gains then we at Resistance Front will do our best to hinder such filthy schemes of Fascist Sanghi regime.”

Openly warning to attack the pilgrims, the terror outfit stated “We will openly target any stooge who becomes a pawn of this Fascist Sanghi regime and the blood of such stooges and pawns will spill like anything everywhere from Jammu to Kashmir. Keep that in mind.”

Vijay Kumar, Inspector General of Police (IGP), Kashmir, said today that incriminating materials, arms and ammunition including 15 pistols, 30 magazines, 300 rounds and one silencer were recovered from the possession of the terrorists.

The Jammu and Kashmir Police have filed a case under relevant sections in connection with the arrest.

The IGP described the arrests as a big success.