Chaos over Amaravati â Why is yet to be built new Andhra Capital already mired in Controversies? 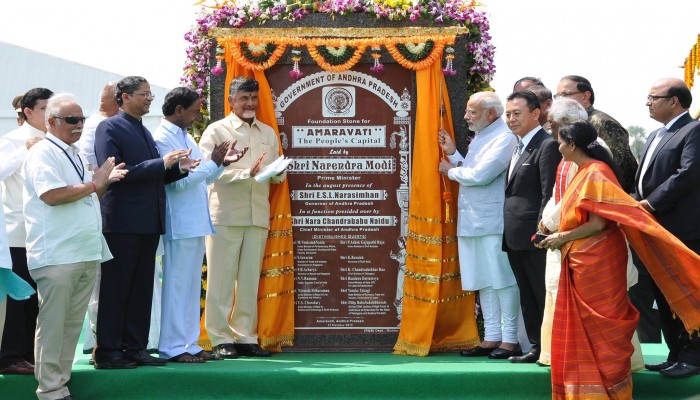 Ever since the TDP pulled out of the government and subsequently the NDA, a controversy has been raging on multiple fronts. My previous articles sought to give you details on a couple of topics. This article seeks to explain the (surprising) controversy around the construction of the capital city, Amaravati.

In 2016, when Chandrababu Naidu shifted the secretariat from Hyderabad to Amaravati, here is a snippet from an article published in MyIndMakers.

“Nearly 5000 employees will be moving from the comforts of Hyderabad to the unknown confines of Amaravati.  From a no capital city in 2014, to acquiring more than 33,000 acres, to publishing master plans for the city,  to building a temporary complex for Secretariat in 2016 – is by no means a small achievement! The government needs to be congratulated for this.”

At that point of time, one of the biggest achievement of the TDP-BJP government was that a whopping 33,000 acres of land was acquired, through a unique land-pooling process. Detailed master plans were ready, and also the construction firm Maki and associates from Japan were tasked with constructing the key buildings like Assembly, Secretariat, High Court etc.

However, things didn’t work out as expected with Maki and associates, and their contract was cancelled. And the entire design phase opened yet again! This time, Foster+Partners, a UK based firm was given the contract. All through the year 2017, the designs underwent multiple discussions and changes (nothing surprising, given the importance of the buildings!). Chandrababu Naidu even roped in Bahubali’s director S.S.Rajamouli to help with the creative aspects of the design. A controversy erupted over it, but I think the controversy was silly – because Rajamouli was bought in only to give suggestions and not do the actual design.

During this time, the opposition kept on asking - why is it taking so long to finalize the designs? Again, I found it quite silly. If we are designing our own home, we would like to ensure that we are absolutely in love with that design. Here we are talking about the key buildings of a new capital city! A “delay” of about one year is quite understandable, and shouldn’t have been made into an issue.

We now come to the present. At the beginning of the article, I mentioned about “(surprising) controversy”. Once TDP pulled out of the NDA, they went to town saying that the Central government did not give enough money to Amaravati. The first question that will pop into your mind – Why should the central government award any money to Amaravati? Simple answer – because the AP reorg act says so:

“The Central Government shall provide special financial support for the creation of essential facilities in the new capital of the successor State of Andhra Pradesh including the Raj Bhawan, High Court, Government Secretariat, Legislative Assembly, Legislative Council, and such other essential infrastructure.”

Why did the central government have to include this in the act? Because AP was being bifurcated, and the successor state of AP will be losing Hyderabad. They wanted an assurance on building of a new capital and the Congress party found a way out – include this in the reorg bill.

The central government has so far released INR 2,500 crores for the capital city of Amaravati. TDP is now claiming this amount is insufficient to carry out any meaningful work. And here is where I found the argument very surprising. The designs for the High Court, Secretariat, Assembly etc were finalized a couple of months ago only! When there were no designs ready in the first place, how can the state government claim that not enough money was given? TDP is trying to explain that a Capital city merely doesn’t mean these buildings. The larger point may be fair, but the act clearly mentions these buildings and the design of the buildings were not even ready till recently!

TDP is also claiming that 1000 crores out of the 2500 crores was actually meant for drainage projects in Vijayawada and Guntur, and therefore shouldn’t count as money given for Amaravati. However, the AP government created a “Capital Region Development Authority” , in which the Capital region encompasses Amaravati, Vijayawada, Guntur, Tenali and Mangalagiri! So there is Amaravati, the Capital City (~130 sq.km), and then there is the Capital region (~7000 sq.km)! And that is why I find this controversy created by the TDP (and the telugu media) to be extremely surprising!

Yet another surprising aspect is that the opposition parties are trying to question the need for building a World Class capital city. This quintessential Congressional attitude of trying to always remain second grade to someone else is why we don’t boast of any world class cities. The building of Amaravati is a brilliant opportunity that has opened up. At various instances both the center and the state governments have committed themselves to build such a city. It is extremely unfortunate that the TDP sought to make an issue out of this, when they had genuine grouses to talk about.