Amaravati - Towards the new Beginning 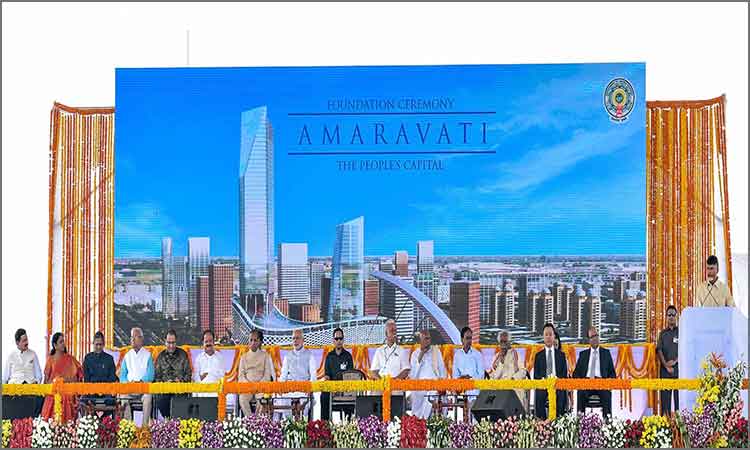 A mere two years after the formation of the state, the Andhra Pradesh CM Chandra Babu Naidu, his cabinet, and nearly all employees of the secretariat in Hyderabad are getting ready to move to Amaravati â the brand new capital city of AP! Nearly 5000 employees will be moving from the comforts of Hyderabad to the unknown confines of Amaravati.  From a no capital city in 2014, to acquiring more than 33,000 acres, to publishing master plans for the city,  to building a temporary complex for Secretariat in 2016 â is by no means a small achievement! The government needs to be congratulated for this.

Of course, the process wasnât without hurdles. There were huge land acquisition problems, and the government resorted to land pooling (which was widely appreciated) for the benefit of the farmers and villagers. Here, it is extremely important to mention the yeoman service that these farmers and villagers have done. However beneficial it is, it is extremely difficult to give up your land and house and village at the same time! The capital will be forever indebted to these folks!

Chandra Babu Naidu has also made the construction of the capital as an emotional issue â he has asked people from every village to collect water and soil from the village, and transport it to Amaravati. He said that he will build a memorial with this sand and water â and symbolically show that this capital has been built by every single person in the state. This program was a big hit, and even Prime Minister Modi bought in soil and water from Parliament House and presented it to the CM.

The last two years have also seen the CM trying to woo many investors, many of whom have promised investments, but are waiting for infrastructure to fructify fully. Good investments have been made into the Industrial Park â âSri Cityâ near Tirupati. Regional media has shown many stories on how thousands of families are getting benefitted by this.

The CM of AP has also been largely reliant on support from the central government â at times even to pay salaries to the employees. He has undergone all the hardship that any âstart-upâ has to go through.

Andhra Pradesh is facing troubles on the political front too. The promised âSpecial Statusâ in Rajya Sabha by the then Prime Minister, has not been granted yet. This is causing quite some anger amongst the people of the state. They believe their state needs all kinds of support, and the central government is not doing enough.

âLeadersâ of the influential Kapu caste are up in arms demanding the promised reservation. During a protest rally, some attendees set fire to 8 bogies of a train. The government has arrested the perpetrators, and one leader has gone on a fast demanding their release! He has found support in the dying Congress party and opposition YSRCP. This is another fire Chandra Babu Naidu is fighting to douse.

A 5 minute speech of K. Tarakarama Rao, popularly known as KTR, at the opening of the Apple Map development center in Hyderabad went viral. He found new fans for his content, delivery and humour. He called the state of Telangana as a âStart-up stateâ, and I immediately recollected an article I wrote back in 2013 â Is it the formation of Telangana or Seemandhra?

And the reasoning behind this is quite simple â At the time of the formation of Telangana, Andhra Pradesh did not even have a capital! It was left to the new state government to initiate necessary processes to get a capital ready for Andhra Pradesh. And here is where the acumen and experience of Chandra Babu Naidu has benefitted the state.

Contrast this with what Hyderabad already had â a world class infrastructure that makes it easy to set up high tech companies; and a steady stream of revenue. The major challenge that KCR and KTR faced in 2014 was to dispel the notion that Hyderabad was safe enough for people from all states and they have done a very good job at it. They have ensured that they market an already stable Hyderabad so that new companies setup shop here. And therefore the argument that Telangana is not a start up state!

Chandra Babu is trying to race ahead with available resources. He still continues to remain the sole face of AP. Again contrast this with the TRS party â while KCR is the main face, his son KTR, nephew Harish Rao, daughter Kavitha have evolved as capable leaders!

While the challenges for both the states continue â it is time to take a step back to 2013 and remind ourselves that Congress under Sonia Gandhi has prepared one of the worst bifurcation bills. The struggles both states are still going through, with respect to things like employee distribution, water distribution etc., stand testimony to this fact. The damage is immense; the silver lining is that both states are #CongressMukt and are being led by able leaders.