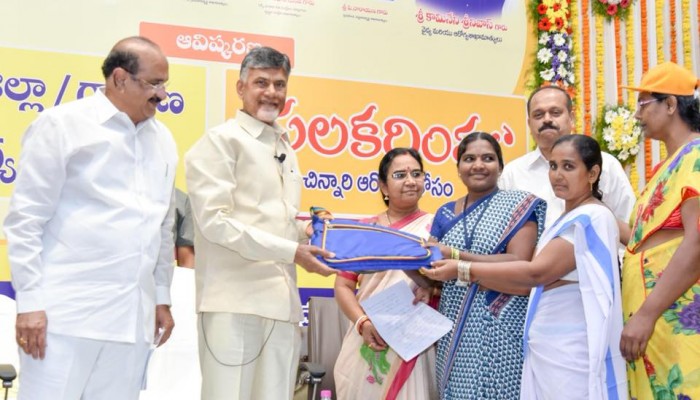 It was very interesting to see social media reactions, one day after the TDP pulled out of the NDA government. The overwhelming assumption was that special status is the only reason the TDP pulled out of the government. And then we had folks reeling out statistics on why AP doesn’t deserve a special status; why it doesn’t deserve tax incentives; how Chandrababu is trying to blackmail Modi and how Modi is not a Vajpayee to give in!

In this article, I would like to bring your attention to the fact that this anger in AP is not just about special status. There are a few other key points on which no movement was seen. I have argued this earlier, and would like to again bring it to your attention how hurriedly and badly the Congress drafted this reorg act.

Why is AP asking for Tax incentives when statistics indicate its growth rate is very high? Simple answer: Because the AP Reorg act says so!

The Congress has written into the law that the central government shall offer tax incentives to both TS and AP! So, on technical grounds, the demand is justified. However, on technical grounds, even the central government has offered incentives – for example, Arun Jaitley has waived of capital gain tax on the transactions of lands that farmers have given for Amaravati (a whopping 33000 acres!). However, the narrative has been so built, that since there are no tax incentives offered to industries, AP is doomed! Recently, KIA started Making in India. They setup their plant in AP – there was an ugly spat on social media on whom to credit this initiative to – PM Modi or CM Naidu?

Why does AP need so much money for building its capital Amaravati, when capitals of other new states didn’t get so much money. Simple answer: Because the AP reorg act says so.

“The Central Government shall provide special financial support for the creation of essential facilities in the new capital of the successor State of Andhra Pradesh including the Raj Bhawan, High Court, Government Secretariat, Legislative Assembly, Legislative Council, and such other essential infrastructure.”

“Such other essential infrastructure” is being read by a few folks that the center will even fund building of the drainage system for Amaravati, because what is more essential that a drainage system! In fact commentators have written that “The reorganisation act also mandates Centre to fund the construction of a green field capital”! This is what the sentiment on the ground is today.

Do people realize here how badly the law has been drafted? Who writes such ambiguous statements like “such other essential infrastructure”?

Why does AP need a railway zone, and why is it a big deal to get a railway zone? Simple answer: Because the AP reorg act says so!

“Indian Railways shall, within six months from the appointed day, examine establishing a new railway zone in the successor State of Andhra Pradesh and take an expeditious decision thereon;”

Railway zone was seen by the people of AP as a saving grace for getting a state without a capital. People were hopeful of employment opportunities getting generated because of this. Nearly 4 years after, people are not sure what the status of this is. This issue snowballed into a major issue, along with the grant of special status! Notice the badly drafted law yet again!

What about these arguments that AP has a large revenue deficit? The 14th finance commission has recommended that the center fund the 22,000 crore revenue deficit of AP for the period 2015 – 2020. There is no argument on this amount. The argument is regarding the amount in the first year of the state, i.e., 2014-2015. AP is claiming a whopping 16,000 crores only for the first year and is citing the CAG report that has given this number. The center is saying that it cannot fund a revenue deficit gap that is based on farm loan waiver, pension amounts etc. Arun Jaitley has proposed a couple of formulae by which the state will get anywhere between 4500 to 5500 crores. Now you can imagine, how the narrative is set – AP is asking for 16000 crores, but center is only willing to give 4500 crores!

In the initial days, this was not a big contention, but slowly started to snowball into a controversy. The TDP and the media started projecting this as yet another instance of how the center is ignoring AP!

Likewise, the setting up of a steel plant in Kadapa; the developing of a Vizag-Chennai corridor; “development of backward areas in the successor States, including expansion of physical and social infrastructure” – all of these have snowballed into big controversies now. What could have been nipped in the bud, was allowed to blossom fully!

The central government has also done a lot of things that were mentioned in the act too – “expanding the existing Visakhapatnam, Vijayawada and Tirupati airports to international standards”, the setting up of various education institutes in the state (naysayers are now saying “enough funds” haven’t come in!); Rs2,500 crore already released for Amaravati etc.

However, at the risk of repeating myself, the issue is more about sentiment than facts now. The people of AP considered a few incentives as very big-ticket items – Special Status, Railway Zone, Revenue Deficit, Capital construction etc. And therefore, the anger is not just because of announcing a special package instead of special status. The anger is beyond special status, and it is imperative for those in power to understand this.

Does all this mean there are no politics involved here? Of course there is ! We will discuss the politics of this, in the next article.