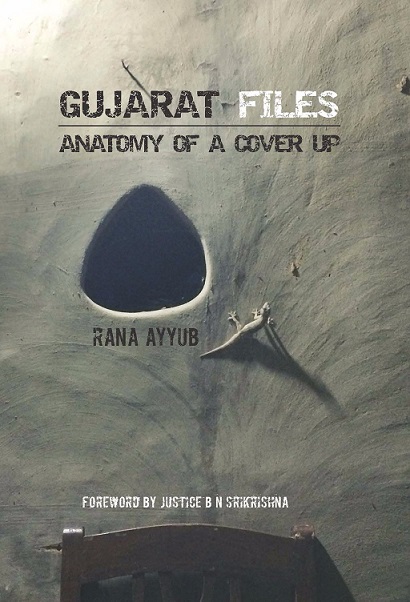 Rana Ayyub, a âjournalistâ most popularly associated with Tehelka.com, a ânews outletâ most popularly known to use âsting operationâ as a mode to collect news, has come out with a book. âGujarat Filesâ. It is supposed to be a tell all book on alleged state sponsored political murders and âfake encountersâ which are supposed to pin Amit Shah, the then Home Minister of Gujarat and current national president of ruling party, and Narendra Modi, the then Chief Minister of Gujarat and currently the Prime Minister.

I finished reading the book, which I paid for from my own hard earned money, and I have come to the conclusion that it is nothing but a sermon of personal hate and vendetta against the people she wants to ânail.â

Not only is the book full of grammatical errors and badly narrated, it lacks consistency. At best it should have been filed under a hate speech on her personal blog. She talks how her report sent Amit Shah to jail and hence to find truth about Sohrabuddin, she would have to assume an identity.

First of all, she should stay away from WebMD. She had self-diagnosed that she was suffering from depression (yea, mental health awareness crusaders, please come forward, a âjournalistâ just used the serious condition loosely to describe her boredom) and the only thing that helped her came out of it was when she took up project Sohrabuddin. (wikipedia link)

She makes sure that she describes her undercover act in great detail. She wears chunky jewellery, skirts and colourful bandana to show how she is a documentary film maker from the US, making a film on the famous people from Gujarat. She stayed at Nehru Foundation and within first few days her room was âsearchedâ.

Incidentally, other than Naresh Kanodia, the SRK of Gujarati cinema, the only people she meets for the âdocumentaryâ are top cops and ministers. Interestingly, the transcripts of all these sting operations all talk about 2002 riots. Sohrabuddin wasnât even involved there. Amit Shah (whom she very proudly sent to jail on basis of her investigative âjournalismâ) was not the Home Minister during riots. 80% of her book focuses of 2002 riots and how the top cops feel âused and thrownâ by the CM and HM (who was not even HM then).

The transcript of her sting was extremely confusing. The only things I understood from her writeup was:

All these sting tapes were not released until now. That is in the âbookâ she self-published. These tapes are not authenticated. She says she will give these tapes to investigative agencies if they ask for them. Why not make them public for everyone to see and hear? Trial by media is one of Tehelkaâs strong points anyway!

Hope she gets prize in fiction for the lizard on the cover page book.

Rana Ayyub ends her âbookâ by saying that Tehelka didnât publish her âstoryâ because there was political pressure. As back as 2010, she and Tehelka team had deduced Narendra Modi will become the Prime Minister in 2014 and hence they were under political pressure not to publish it. Ayyub remained silent, in a dramatic way, âuntil nowâ. Shoma Chaudhury, former editor at Tehelka and Rana Ayyubâs boss at Tehelka has spoken up on Twitter.

Well, if Tehelka, which is not particularly known for its high standards, does not consider your stuff up to editorial standards, we know the grapes are sour!

This is an edited version of the blog published here http://nirwamehta.in/gujarat-lies-a-collection-of-personal-vendetta/ , this has been reproduced with the authorâs consent.