Samskrta Samaaropaha on the eve of World Sanskrit Day by Carnatic Conservatory of Paris: A report 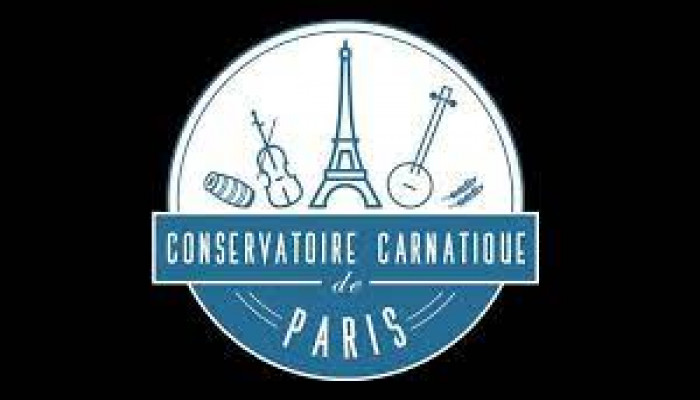 With the support of the Indian Embassy in France Carnatic Conservatory of Paris, France organized Samskrta Samaaropaha as part of World Sanskrit Day on August 22nd, 2021 as part of Amrit Mahotsav.

Founded by Pradyumna and Bhavana Pradyumna, CCParis is based out of France, promoting Indian Music, Dance, Yoga and Scriptures. Its projects have been recognized by Ministry of Culture, Government of India and France, ICCR and different Indian Embassies across the globe.

Carnatic Conservatory of Paris is committed to spread knowledge about Indian Music, supported by Scientific Research.

The theme for the celebration was Rasa through different forms like Subhashita, Music, Dance, Sculpture, Percussion and Kavya.

Naman Upadhyaya, cultural secretary spoke about the importance and Indo-French Sanskrit relationship which was chaired in 1815 as the first ever conference studies for Sanskrit studies in France. This was also the first in the western world even before UK or Germany. He appreciated the efforts taken by CCParis to spread Indian culture through Bhagavadgita and Amarakosha doodle videos and Gita Nritya events to name a few.

We proceeded with the Amarakosha doodle video created by Aniruddha Kandadai, an 8 year old, who released videos with Fun Fact Friday about Sanskrit through Carnatic Conservatory of Paris Youtube channel. All the legends present appreciated the little boy’s efforts.

Rasa through Subhashita Vasundhara Filliozat and Monsieur Pierre Sylvain Filliozat (President's awardee) brought the beauty of teaching and making language learning simple and interesting. They stressed on learning grammar through Subhaashitas and in turn learn the language with laughter.

Rasa through Music by Dr. Mysore M Manjunath was a treat to ears. A legendary violinist gave us a treat on how ragas evoke emotions like shanta, karuna, sringara, adbhuta through Ragas like Kalyani, Begade, Shubhapantuvarali and how ragas like Hamsadhwani, Kamboji, Varali unless combined with words, dance or drama cannot express emotions like roudra, bhayaanaka or haasya

Rasa through Percussion by Dr. S. Ghatam Karthick was enriching and attracted the audience. To give a glimpse of hasya, veera, roudra, shanta and karuna through different nadai and Konnakkol Shollu, he made his Ghatam speak! PhD in Sanskrit, Vidwan Karthick gave us the special theme Music ‘Samskrtam Bhajeham’. Vidwan Sarvesh Karthick set the background music and mastered at Swaraksharam Studios. The music inspired us tremendously to create more.

Our temples and temple architectures are our Pride and after 34 years we started receiving UNESCO heritage status for our South Indian temple. Dr. Choodamani is an art Historian who played a key role in recommendation for the recent inscription of Ramappa Temple UNESCO World Heritage Site. The path, not easy; Dr. Choodamani took us through the sculptures at Ramappa Temple architecture. Their Rasa, karana, ornaments, Shiva as diety and also the rhythm of the sculptures were discussed with beautiful presentations and photographs. This is published in her book Ramappa Temple elaborately through different chapters.

We continued with Rasa through Dance where Dr. Gayatri Kannan had shared her video where she explained Rasa through different Dance compositions and beautifully through her Abhinaya.

Rasa through Kavya was presented by Vidhushi Bhavana Pradyumna, Founder of CCParis. The presentation spoke about the great literature and scriptures by our poets Kalidasa Baana Bhavabhooti Dandin Maagha Ashwaghosha. She also explained how detailed the rasas are used in kavyas like Meghadhootam, Abhignyaanashaakuntala, Buddhacharita quoting and singing verses from the Kavya in different Ragas with the support of Carnatic Ragas to evoke the Rasa.

The present scholars compare the poet to Shakespeare, but Bhavabhuti lived in 7th century and Shakespeare lived in 16th. century. The similes of Kalidasa, Bharavi's depth of meaning, Daá¹á¸in's wordplay — in MÄgha all three qualities are found said Bhavana Pradyumna.

The event spanned six hours and truly represented how India is a land of Holistic living. India is a treasure house of knowledge and it is our duty to unearth these and share it to the present generation through the new mediums concluded Bhavana and Pradyumna Kandadai who hosted the entire event. The entire event was curated in a short span of 4 days was watched and joined virtually by hundreds. The videos of the event are available for all on their Youtube and Facebook page channel Carnatic Conservatory of Paris.