Why did Media ignore Rahul Gandhiâs first speech outside India as Congress President? 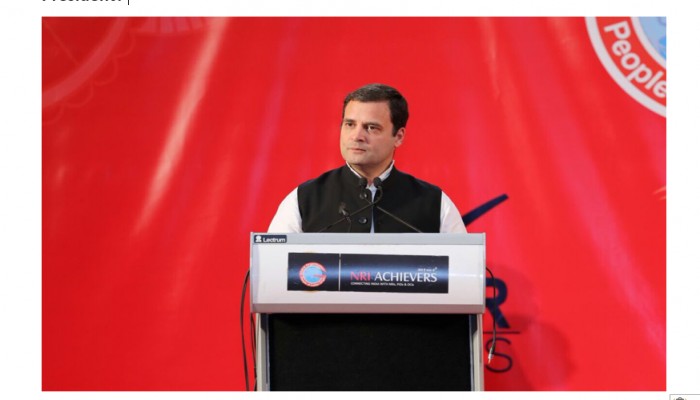 I was curious as to why the English media ecosystem was ignoring Rahul Gandhi’s first speech outside the country as Congress President. He delivered this speech in Bahrain. Apart from a cursory mention, none of the usual suspects were lavishing him with praise. None of them went berserk, like they went during his earlier outing. The only reason I can think of is the speech was *so* bad that it had to be ignored,

So I finally garnered the courage to hear his speech in entirety, and yet again I was flummoxed at the gross incompetence of Rahul Gandhi and the sheer incoherence in his thoughts. As much as I feel like ignoring it, it is important that we bring out this incoherence to the larger audience.

He begins with a small story about his Chemistry teacher who was from Bahrain. And how she talked about how she never felt discriminated in Bahrain despite being an Indian. And then he poses his standard question of “Does everyone understand Hindi? Otherwise I can translate parts of my speech into English too”!

Moving on, he then tells us a story from UP. And he translates every Hindi sentence into English. The gist of the “story” is this: A woman in UP asked him to help remove a IPC 302 cases against her husband. He asked her if the husband committed the crime. She said yes, he did. Then Rahul asked what can I possible do? She then said, “what is the use of you politicians”.

It’s still the beginning of the speech, but one already begins to wonder what exactly is Rahul Gandhi’s point in telling this “story”. Looks like Rahul’s speech writers were also confused at this point of time to correlate the next part of his speech to this part. And they come up with an ingenious plan! Here is the text of how Rahul linked the two parts.

“The lady asked me two questions:

And these are the two questions I want to answer here:

Phew! I mean, he had to all the way to Bahrain to answer two questions that a lady asked him in UP many years ago? Such incoherence in Rahul Gandhi’s speeches is not something new. Almost every single speech of his is like this – and is typically lapped up the English media in our country as something revolutionary.

Rahul Gandhi then continues with the flow. “This time I am here to tell you what you mean to your country. That you are important. To tell you that there is a serious problem at home.”

“Serious problem at home”, Mr. Rahul Gandhi? Because you are losing election after election? Because your thoughts don’t resonate with the voters in India? Why are you so keen to go abroad and talk about problems at your home?

The next few minutes of his speech read just like a campaign speech against India’s Prime Minister, Narendra Modi. He brings in the Independence struggle (incomprehensible what that struggle has to do with Bahrain!), and goes on to proclaim that “India today is free, but is under threat”.

Tells an outright lie that “Judges handling sensitive cases die mysteriously”. It is amazing how the English media ecosystem feeds him all these inputs, and equally amazing is how he gets away scot free!  He goes on to tell the audience that “What China does in two days, India takes one year.”

Rahul Gandhi and his ancestors ruled India, and kept it backward while China surged ahead. So, while Rahul rues about the lack of “world class educational institutions” in India, it is a scathing commentary on his own family’s rule. I wonder why he keeps thinking that the people of India can’t see this through.

The speech began with “I am here to tell you are important”. It ended with “I have not come here to tell you anything.” The speech strangely makes multiple references to the Independence struggle! The speech makes no mention of how Rahul Gandhi seeks to tap their “help to fight these forces”.

Typically, keynote speakers spend anywhere between 30 to 60 minutes to talk to their audience. Unless of course time is a severe restriction. Rahul Gandhi’s speech was roughly 15 minutes long. Is it because he actually had no content to talk about, except rehash his recent Gujarat election speeches? Please do notice how the entire ecosystem downplayed this speech – it is because the speech was actually THAT bad.

This speech is as bad as any other speech he has delivered on foreign lands. Whilst the ecosystem went out of its way to hype his Berkeley speech I would urge you to listen to both of his speeches and decide for yourself if there is any difference between the two speeches!

PS: Notice how he disparages and takes pride in UP’s backwardness. “Some years ago, I was travelling in UP. Dusty Roads.” “In UP you have to be suspicious, so I got suspicious.” This romanticizing of backwardness is well past its sell by date. Hopefully Rahul Gandhi will move past this!