Why is the media so desperate to impose Rahul Gandhiâs incoherent thoughts on us? 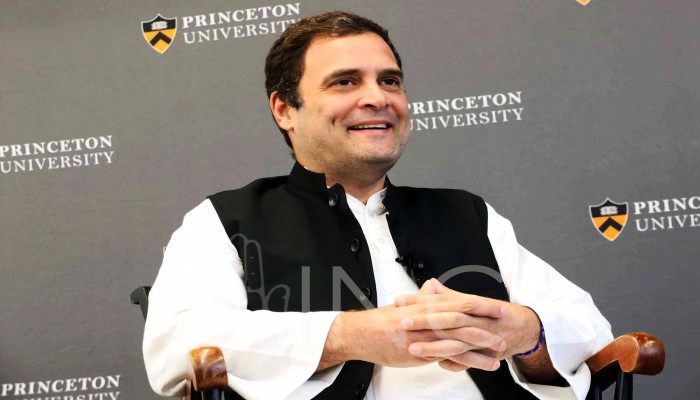 On August 25, 2017, the office of Rahul Gandhi lets us know that Rahul Gandhi is going to Oslo, at the invitation of the Norwegian foreign ministry:

On the invitation of the Norwegian Ministry of Foreign Affairs, will be travelling to Oslo for a few days. Looking forward to meeting and exchanging ideas with political and business leaders & research institutions.

The next tweet about the Norway trip came only on August 30th. And in the intervening 5 days, only 4 tweets came, 2 of which were on August 25th itself. The original message did not tell us when will he be leaving, but given the near zero activity on the twitter account, it will be fair to assume he left on August 25th itself. So we have no idea if he was merely holidaying somewhere in Norway itself!

On August 30th, we get the following message:

And very strangely on August 31st,  we get the following message:

Why is it strange? Many twitter users instantly pointed out that it is impossible for anyone to grow such a beard in one day! The pictures tweeted out on September 1st were again with a clean shaven face! Very clearly, they were not tweeted out in the same sequence as the actual events! We are not even sure about the actual dates on which the visit took place and these have yet again exposed the callous nature of Rahul Gandhi’s politics.

However, the Norway trip has also given rise to a new trend – to mask a holiday into an official trip! Rahul Gandhi has drawn flak for taking too many vacations. And to circumvent that argument, he seems to have come up with this ingenious plan! What else explains a mere 4 meetings in Norway, for a full 10 day trip? (He was next seen in public on the 4th of September).

The bravado of Rahul Gandhi is that he hasn’t limited this ingenious plan to Norway. Almost immediately, this same logic was extended to a tour of the United States! First, there were these news leaks that he is going to the US to talk about Artificial Intelligence. After a few days, we are told by Sam Pitroda that this news is false. And in these few days, this news became the hot topic for multiple memes.

On September 12, he spoke at the University of Berkeley. And then the next tweet about a program in the US was on September 19th. So was the intervening period between 12th and 19th, an extended vacation? A “discussion” with students of Princeton on 20th, and a speech somewhere near the Times Square on 21st completed the program. So for 10 full days, we are treated to just 4-5 public appearances, most of them towards the end of the tour! Is this disguising of a vacation as an official trip, going to be the norm going forward?

Let us also discuss the content of his speeches, for which the English media is going gaga (yet again!). Don’t believe me? Here is NDTV (yet again!) with a dedicated program:

Intelligent? Because Rahul Gandhi analyzed that “We aren’t spending enough on healthcare and education”? Or because he enlightens us with “If India has to produce millions of jobs it has to be done by empowering small & medium businesses and entrepreneurs”? Or because he talked about centralization of power – “The problem everywhere in India is concentration of power. Good governance is about resisting centralization of power”. Or because he claimed that Congress could not provide jobs and given an opportunity again he doesn’t know how to solve that problem?

But then this is not the first time he is talking about these topics! He spoke about these in 2013, 2014 etc. He has been constantly speaking about the “closed systems” his party had created and about the “corruption” that his party has ensured engulfs the entire country! This is also not the first time the English media went gaga over him. Why is the media so desperate to impose Rahul Gandhi’s incoherent thoughts on us? What explains this obsession to search for meaningful thoughts in his speeches?