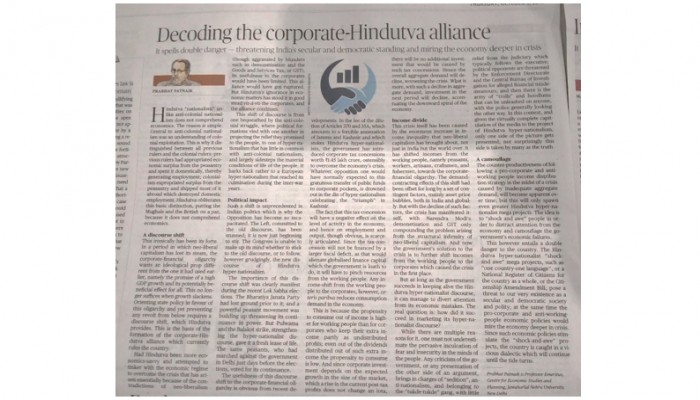 I got very concerned after seeing the op-ed article in The Hindu on October 3rd, 2019. Concerned not for the country, but for the employees at The Hindu’s op-ed desk. Concerned because they seem to have yet not recovered from the shock of the 2019 verdict. On Day 1 after the verdict, they wrote an editorial and an op-ed article deriding the choice of the people of India. Such immediate reactions were understandable given the massive shock they received. But to continue to reel under the shock for more than 100 days is something that should concern all of us. Because what else can explain this ghastly headline and article on October 3rd, 2019?

But for the author, this isn’t mysterious. He tells us that “The reason is simple.” And goes on to explain in a laborious paragraph that because British shipped away profits to foreign shores, we cannot equate them to the Mughals! “Hindutva obliterates this basic distinction, putting the Mughals and the British on a par, because it does not comprehend economics.” Again – just in case you forgot from the first line, we are reminded yet again that “Hindutva does not comprehend economics”.

The author throws in in complicated terminologies like “corporate-financial oligarchy” as the basis of “the formation of the corporate-Hindutva alliance which currently rules the country”. And before we lose track in this maze of complicated words, we are quickly reminded of the “blunders” of demonetization and GST! I don’t understand this – demonetization was done in 2016 – how on earth can it impact the economy in 2019? The impact it had was done and dusted in early 2017 itself. But the “eminent journalists” are still desperately trying to impose their ridiculous comparison on us – this kind of brainwashing would have perhaps worked in days when Social Media was absent, but not today, not now!

At this point of time, the author realised that he hasn’t yet spoken about the “corporate” in “corporate-Hindutva alliance”. So he directly brings in, surprise surprise (not!), the INR 1.45 lakh crore recent corporate tax reductions! Hailed widely as a move that will revive the economy, the author has a whole different take on this move – that it will have a “negative effect on the level of activity in the economy, and hence on employment and output, though obvious, is scarcely articulated.” This is perhaps the first time one is hearing that a tax concessions will have a negative effect on level of activity!

We are then treated for more complicated terms like “neo-liberal capitalism”, “demand-contracting effects”, “globalized finance capital”, “ceteris paribus” before moving to the all time favorite topic of eminent journalists – intolerance! It is because the government succeeded “in keeping alive the Hindutva hyper-nationalist discourse”, that the economy is in a crisis it seems. Not happy with just intolerance, the author throws in NRC, Citizenship amendment bill, the alleged “one country, one language” controversy that are, surprise surprise (not!) a “threat to our very existence as a secular and democratic society and polity”. Isn’t it time that these folks atleast stop being so lamely predictable?

In my humble Hindutva opinion, this article should be included in the syllabus of Journalism schools. Because this is the best example of how to write an article without trying to convey anything worthwhile!