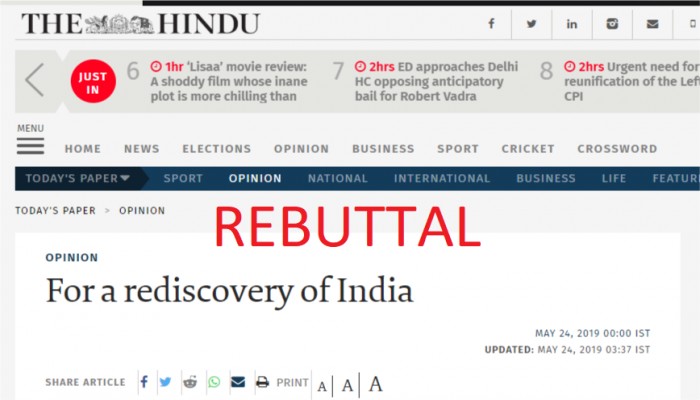 Instead they have begun their campaign for 2024, right from Day 1. DAY ONE. The Hindu had a long editorial and equally long Op-ed piece today. Let’s first analyse their editorial.

“The outcome, hence, must be understood as an electoral endorsement of Hindutva, or Hindu nationalism, the creed that guided the BJP and its forebears for nearly a century”

Unable to rely on Hindutva further, The Hindu then continues to discuss the origins of the “Idea of India”.

“Championed by the first Prime Minister of India, Jawaharlal Nehru, it sought inspiration from the millennia-old civilisation, the Vedas and the Upanishads, but also strived to build India into a modern society with a scientific temper and liberal values. The idea outlived Nehru, but it had begun to fade soon after his passing.”

If the idea of India “begun to fade soon after Nehru’s passing”, who exactly should take the blame? Shri Lal Bahadur Shastri? Of Nehru’s daughter, Smt. Indira Gandhi? How did The Hindu jump directly from 1962 to 2014 and wanted to get away with the interim period with a mere “soon after his passing” kind of silly statement? Did they think that the Social Media will be in celebrations and therefore ignore this trite?

“With the 2019 result, Hindutva has pushed Nehruvian secularism to the margins of Indian politics. The Congress, now led by Nehru’s great-grandson Rahul Gandhi, did better than in 2014, but not enough to even be recognised as the official Opposition in the Lok Sabha”

Are we now rolling out the red carpet for Rahul Gandhi for doing “better than in 2014”? An increase from 44 to 52 is now being seen as an achievement by the gang? Do they really want us to buy this logic? And pray, what exactly is Nehruvian secularism? The same secularism that couldn’t find a space in the then constitution document? The true secularism is practiced by Prime Minister Modi – “Sabka saath, sabka vikas”. If this is not true secularism, I don’t know what is!

The hatred just does not end there. “The 2019 verdict has also dismantled social justice politics in Uttar Pradesh and Bihar”. What kind of “social justice” is it when narrow minded political parties ensured that the poor remain poor? Does The Hindu think that the people in UP and Bihar are so unaware of “social justice” that they gave it up for an imaginary “Hindutva” plank? From where does this arrogance stem for this gang?

“The welfare schemes of the Modi government did play a role, but these or the promise of economic development were not the real differentiators.” – Oh thank god for the small mercies! The MUDRA Loans, the jobs, the cylinders, the houses, the electricity, the roads, the bridges, the rails, the taxes – all these didn’t matter much! “Hindutva” mattered a crores of people from across the country!

“Prime Minister be asked to live up to the promise they continuously make — ‘sabka saath, sabka vikas (with all, development for all)’. These tenets must be felt in the daily lives of the marginalised sections of the population, and Mr. Modi must add a third tenet to make his mantra meaningful: sabka vishwas (the trust of all).”

How low can these people really get? Did Modi really win this election if crores of people actually didn’t believe in what he has done so far? Does The Hindu really think that the “marginalized sections” haven’t “felt” vikas in their daily lives? And yet came out to vote for Modi, in massive numbers?!

Now, if you thought the editorial is outrageous, you must read the Op-Ed, by Harish Khare. First – Harish Khare is a known opponent of anything BJP. Tomorrow if Modi says breathe regularly, Harish Khare might write an article opposing the statement. So it wasn’t very surprising to see him write the following today: “The 2019 verdict has produced coherence in our governing arrangements; yet it is cause for democratic unease and concern”

Harish Khare has already begun to sow seeds of hatred in the country. What else explains this rant – “The 2019 verdict has a chilling message. The minorities’ votes do not count, and therefore, they can be done out of their space under our collective sun. The Muslims have been told, once more, to remain stranded in their own islands of resentments and grievances.”

Really, have they been told so? Where have they been told so Mr. Harish Khare? While volunteering for the campaign, I have come across people irrespective of religion endorse Mr. Modi’s policies. If only you had the gall to come out of the comforts of your office and interacted with normal people!

“The Hindu hopes that Mr. Modi’s second term will be more inclusive than the first, which was marred by arrogant pride and hateful prejudice.”

The people of the country have slapped The Hindu with a resounding verdict. The people of this great country would never have reelected a government with such a mandate if it wasn’t inclusive; if it was arrogant; if it spread hatred and prejudice. The Hindu must stop insulting the intelligence of the citizens of this great country. And must reflect on why their arrogant and hateful campaign didn’t click with the people of India.