Is it true that Modi Government has been unfair to Andhra Pradesh as alleged by TDP and other Telugu Parties? Here are the numbers and numbers donât lie. 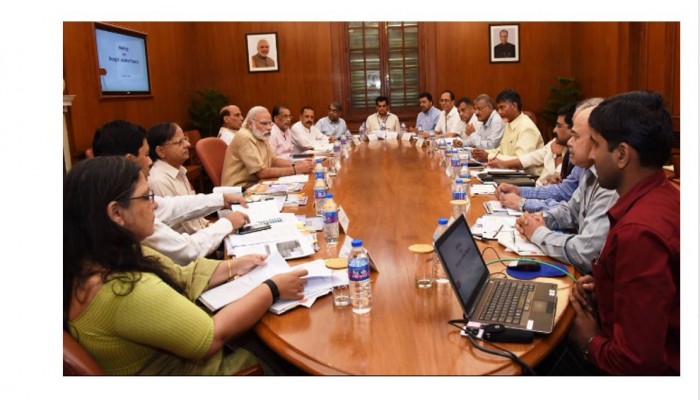 Ever since the political crisis in the NDA broke out, numbers are flying out fast and thick. Every political party that has a stake in AP is coming out with its own version of numbers – how much was given to the state, how much was received by the state, how much was spent by the state etc. There is no uniformity amongst these numbers, but the underlying sentiment still prevails – the Central government has not stood up to its promises. However, the state government is not squeaky clean when it comes to certain claims. Let’s take some time to understand these controversies related to the following:

In February 2015, the central government announced that they are accepting the recommendations of the 14th Finance Commission, and because of this, the states will now get 42% share of the central taxes instead of the 32% they got earlier. This whopping 10% increase was unprecedented and was generally well received too.

In addition to this, the central government has also agreed to compensate for the revenue deficit of a few states for the period 2015 to 2020. As part of both decisions, Andhra Pradesh was to get the following – A whopping INR 1,78,000 crores over a period of 5 years starting 2015, and an additional INR 22,000 crores for the bridging the revenue gap. That would amount to a total of 2,00,000 crore!

Tweeting at that time, I felt this was a master stroke by the central government – without having to give a special status, the central government had solved the problem of revenue deficit of AP and they get an additional 1,78,000 crores. But my assessment was short-lived, and massively backfired too! Please allow me to explain this through a couple of snapshots.

This is how the largest circulated telugu newspaper covered the allocation, in its Hyderabad edition.

The banner headline highlights the 10% extra money that will come through devolution. There is a chart that shows the revenue deficit of different states. And on the same page, we are told that Telangana will get 1 lakh crores for the next five years.

How was the AP news covered then? Because this was in Hyderabad edition, the news was covered in the inside page, prominently, like this:

The headline highlights the Rs 22,000 crore benefit from revenue deficit only. Only one of the bylines tells us about the whopping Rs. 1,78,000 crores that AP will additionally get! And then there was another headline that says AP actually asked for more than 1 lakh crores. Do you notice the anomaly? Whilst 1,78,000 crore is a small byline, the key headlines are that AP asked for  more than 1 lakh crore but got 22,000 crore only!

This is when we understood that the sentiment in AP is very strong for a special status. It does not matter if AP get 2,00,000 crores additionally, because all other states are also getting benefitted from the additional 10% devolution! It is this sentiment that the BJP has failed to read. The TDP-BJP combine failed to communicate to the people the benefit of these 2,00,000 crores!

The second issue is regarding revenue deficit. Here is how the whole thing is being played out. First, let’s see this graphic that shows the Central government side of the story.

AP is claiming that the revenue deficit for that year alone is 16,000 crores! They are also citing a CAG report to bolster their stand (Quite strangely, though I have been able to easily find the CAG report for 2015-2016, unable to find a similar report for 2014-2015. Any help will be appreciated ). However, news reports have claimed that there is another CAG report that says that this 16,000 crores is an overestimate, and the real deficit is ~7000 crores. There is a contention therefore between the center and the state on this amount. So far, about 3900 crores were released by the center for the year 2014-2015. Arun Jaitley has proposed (from ~8:00 here) two formulae – if you use one, then the remaining amount due is only 138 crores. If you use the second, then the remaining amount due is about 1600 crores. And he is saying that the center is willing to give the 1600 crores.

Head spinning with all these numbers? Don’t worry, you are not alone! And here is where the political messaging also comes into picture. It is pertinent to note that so much number crunching is not possible to be drilled down to the public! The TDP is succeeding in telling people that the central government is claiming that the revenue deficit is only 138 crores! That they are asking Rs.16,000 crores, and Modi is saying Rs.138 crores! No mention about the other 1000s of crores released – the messaging is that the central government is claiming a meagre amount of 138 crores only is due.

The other emotive issue on which the central government has failed is the railway zone to Vizag. Technically, the AP Reorg act says that only a feasibility study will be done by the Indian Railways within 6 months of the formation of the state. Till date, no such study has been released. A couple of days back, Indian Express published an article:

There are two problems here. One arises if we are to assume the contents of this news report are true. The report states:

“Any further fragmentation of Railways will be like putting many nails in the coffin of the Indian Railways as there is no need for any new zone, operationally or administratively.”

The second problem is this – if the contents of this report are untrue, then why haven’t we heard any rebuttals from the Railways or even the Minister himself? Either way, the messaging on the railway zone has been really poor. Telugu media has recently highlighted that an official in the central government has announced that a railway zone is impossible. Chandrababu used the floor of the Assembly to highlight this as an insult to the people of AP – he has directly asked why can’t the center differentiate between a political decision and an administrative one!

One must understand that a railway zone to Vizag was shown as a big relief to AP, and therefore became an emotive issue, once the center started dilly dallying on this. At the risk of repeating myself to the point of boredom, the issue in Andhra Pradesh is now political, not bureaucratic.