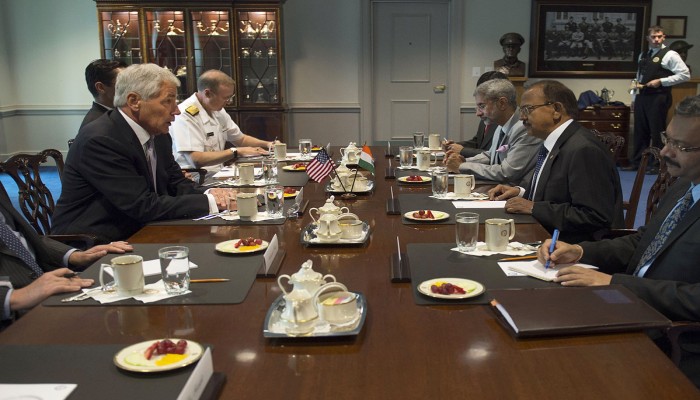 The following tweet by Hartosh Singh Bal landed up on my timeline a couple of days back.

I had to read it twice to believe he thinks Ajit Doval is more hype than fact. But then I also realized this is Hartosh Singh Bal and wasn’t surprised anymore. I went on to click on the Caravan article he had plugged, and have been tempted to write this article.

Caravan is known for its long form journalism. Ajit Doval was their cover story in their latest edition and they have published a whopping 18,241 word article on him. Eighteen Thousand words! Don’t worry, this article is not going to be that long;). After about 1000 words, the first conclusion has been arrived at.

“The NSA’s record so far has been lacklustre.” The first 1000 words also did not tell us anything about why the folks at Caravan think Ajit Doval’s record as NSA has been “lacklustre”. But the premise has been set for the next 17,000 words.

“The situation in Kashmir is now more volatile than it has been in decades, with militancy once again on the rise.”. That’s an awesome way of summarizing the situation in Kashmir! Nearly 150 militants have been killed, including some high-profile ones. Only our media can see this issue as a “rise in militancy”. And talking about this being “more volatile than decades”, I would simply like to draw Caravan’s attention to the situation in 2010 when there were large scale “Anti-India” protests in the valley, and every day we read headlines of ordinary people getting killed. Don’t believe me, here’s a blog from 2010, and a media image from 2010 asking India to “Go back”.  2010 to 2017 is not even a decade, leave alone “decades”!

“Doval’s political connections have contributed heavily to his career. During his IB years, he had close links to the Bharatiya Janata Party and the Rashtriya Swayamsevak Sangh.” Now you see, Ajit Doval doesn’t seem to have any talent but for his exceptional political connections in the BJP and the RSS. That is why he won the Kirti Chakra in 1988 when BJP was nowhere close to power, and was appointed the head of the IB in 2005 when UPA was in power!  Anyways we digress from the main agenda by stating facts, so let’s move on. After establishing that Doval is a product of the political system, we are now taken into the main article (a full 1200 words later!).

“Studying how Doval sees the Indian state lays bare how the country’s present rulers and their supporters do too.” I am shocked beyond belief that the author did not include the names of people who are followed by Prime Minister Modi on twitter! I mean, that’s the flavor of the season, so how come Caravan missed mentioning them?!

“LITTLE IS KNOWN about Doval’s early years. He was born in 1945, into a Brahmin family in a village called Ghiri, in the hills of what is now Uttarakhand.” Even though “little is known about Doval’s early years, it is very important for us to know that he was born into a Brahmin family. Because this then establishes his closeness to the BJP and the RSS, and voila – we know why Ajit Doval is famous! Later in the article, one of Doval’s speech is reproduced where he says that though he is from a Brahmin family, his food habits have varied according to the postings he has had!

We are very quickly told that his father was in the army, and Doval joined the IPS in 1968, controlled the “infamous riots” in the town of Thalassery in 1971 and joined the IB in 1972. Controlling riots, of course, wouldn’t count as a significant achievement in any police officer’s career.

“Doval’s career in the IB coincided with several of independent India’s major internal security crises. He left his impress on many of them, even if not as deeply as popular accounts might suggest.”

We must learn the art of praising and condescending at the same time, from folks at the Caravan. “Not as deeply as popular accounts” sounds more like the author is jealous than analytical. The article then goes on to discuss about Ajit Doval’s key roles in “several of independent India’s major internal security crises”. Beginning from his role in countering insurgency in Mizoram to his role in Punjab, Kashmir to his role in negotiating with Taliban during the 1999 hijack till his rise as the Director of I&B. Nearly 6000 words have been spent on this – timelines of various events with quotes of various officers he has worked with, journalists and even L.K.Advani have been used to explain to us the depth of the exemplary work that Doval has done for this country, from 1972 to 2005. And yet we have been told at the beginning of the article that “Doval’s political connections have contributed heavily to his career” !

“DOVAL WAS ANYTHING but quiet in retirement.” We are told that according to a “source”, the then NSA, M.K.Narayanan was not keen on having Doval as Deputy NSA and Doval never “forgived” MKN for that. The Caravan tells us – “For instance, after a series of blasts on Mumbai commuter trains in July 2006, the weekend edition of a leading English-language daily carried a story blaming Narayanan. It quoted an unnamed “retired intelligence chief.” So there were a spate of terror attacks in the country. A newspaper carried out a report criticizing the National Security Adviser, and Caravan sees a motive behind it?

“Frozen out by the Congress, Doval turned again to his old patrons in the BJP. Doval chose to position himself behind the rising star, Narendra Modi.” This is because Narendra Modi had invited him to setup a Raksha Shakti university in Gujarat. That’s it. And then we are treated to a 2500 word section on his days while leading the Vivekananda International Foundation. Excerpts of his views on many issues, ranging from reservations to Pakistan; repeal of POTA to “invasion of illegal immigrants” – have been pasted to tell us that “Many of Doval’s public statements echo the draconian majoritarianism of the BJP and the RSS”. Wow – “draconian majoritarianism “ eh? Use fancy words so that that the rhetoric gains more value. After this ~2500 word treatise, the Caravan thankfully moves to his current role as India’s NSA

“A senior journalist covering the prime minister’s office told me, “When Doval is with the PM, nobody can enter. Not even the principal secretary, Nripendra Misra. Not even a call can be transferred.” Ah, we have the journalists at play now! I find this statement “duh” at so many levels! By the way, we also had a news report that said when the PM is meeting MPs in the Parliament house, no phone calls are transferred. Does that make them both equals? We are also told that Ajit Doval got a secret intelligence report saying Rohith Vemula was not a dalit. There was a court case going on regarding Rohith Vemula’s caste, so there is nothing secret about it. Anyways, too much has been said and written about Rohith Vemula, so let’s move on. We are then treated to more views and actions of Ajit Doval as the NSA – that include his contributions towards easing the Doklam crisis; his “failure” at Pathankot operations; his meeting with Mamta Banerjee; his speech to the budding IPS officers at their academy etc. At places, the tone and tenor of these paragraphs sound as if we are talking about an enemy and not our NSA!

“Doval, Rammohan said, “is a brilliant officer but he is behaving like a sycophant to the BJP.” This might be his legacy.” The Rammohan who is being quote here is a former head of BSF. Based on his quote, the Caravan has ended their 18000+ word article telling us that Ajit Doval’s legacy might be that he was a sycophant to the BJP!

Many such drastic conclusions that the article has arrived at, simply astounds me. Mr. Doval’s outstanding contributions to his country (as detailed in the very same article) have been agnostic to whoever was in power – and neither are his views so extreme that it warrants such strong and misleading choice of words. Ajit Doval seems to have massively frustrated the liberal gang, and therefore this hit job against him. If as Hartosh said, Ajit Doval is more hype than fact - then I am at a loss of words to describe what Hartosh does day in and day out!