Congress has been a lazy opposition to Narendra Modi since 2014 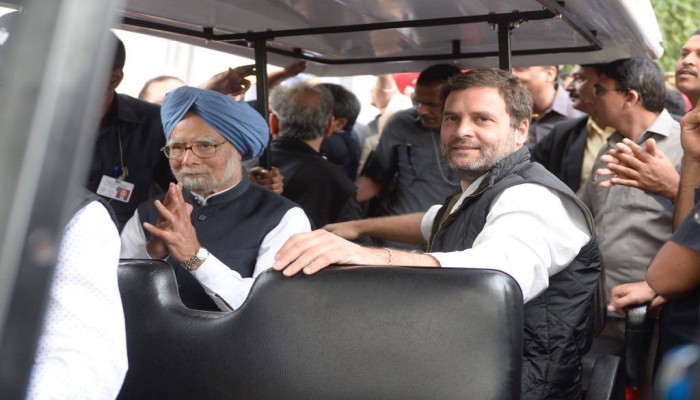 The Modi government has completed 3 years. In the run-up to this event, the Congress party looked clueless on how to counter the government. My observations began with this tweet of Shashi Tharoor on the 27th of May.

I was extremely amused to read this! 18,452 villages have never even known what electricity looks like. On a war footing, the government has electrified these villages. It is common knowledge that electrification doesn’t mean 100% electrification of all houses – Shashi Tharoor has been in the government and jolly well knows these facts. Getting electricity to the village and then to the households is work in progress, and is something that the state governments are involved in too. Aashish Chandorkar shreds to pieces this facile argument in this data laden Swarajya piece, so let’s move on to the next criticism by the Congress party, via Shashi Tharoor.

“So we need to elect a government to tell us to get ourselves a job?”

This was about an out of context report by Hindustan Times.

“Not possible to provide jobs to all, so we promote self-employment: Amit Shah”

Why is this out of context? One of the key schemes of this government has been the MUDRA scheme (Read more here: https://www.myind.net/Home/viewArticle/pm-modi%E2%80%99s-stamp-micro-finance-banking-sector-%E2%80%93-mudra-bank). This was intended to promote entrepreneurship and is also one of the major success stories of the government. I have heard Amit Shah speak on this topic, more than once. He has very clearly said that encouraging entrepreneurship will create more leaders in the society in addition to jobs getting created. Self-employment is a good thing, so it beats me why the Congress party wants to rely on twisted tweets of news media to criticize the promotion of entrepreneurship.

And then Rahul Gandhi steps in. He tweets:

“When they fail to deliver they divide & distract. But anger and hatred will not convert into jobs or solutions”

The Congress party has been harping on this rhetoric from Day 1. The people of this country have time and again demonstrated that this rhetoric is getting boring. For years, Congress party thrived on divisions in our society and yet – the party somehow miraculously sticks to this argument to somehow show that there is an attempt to divide the people of this country. And post this tweet – Rahul Gandhi has been missing in any action.

No article on the Congress party is complete with talking about what Kapil Sibal says. He wrote a long op-ed in The Hindu, quoting the Prime Minister widely from pre-2014 days. Let’s now take a quick look at some of his strange arguments:

“Petrol and diesel prices continue to be raised with shocking regularity. “

“Industrial production is down, the rupee is down and somehow people have stopped believing in GDP figures that this government relies upon.”

Rupee is down? During UPA 2, in a very short period, it slumped from 53 to 69, against the dollar! No explanation has been given for this slump. In June 2014, rupee was around ~60. Today it is ~64.5. If this is the most concerning aspect to the congress party, then media should stop wondering why people don’t take Congress party seriously! Also, the rhetorical - “somehow people have stopped believing in GDP figures” argument sounds so childish as if Sibal ran out of arguments to write!

“There has been an increase — by 67% — in complaints received of corruption in various government departments.”

I find it absolutely stunning that Kapil Sibal thinks that increase in number of complaints is equal to increase in corruption! Perhaps, just perhaps, Kapil Sibal should have taken this argument into consideration – people are complaining now, because they are more confident that action will be taken?

Kapil Sibal also quotes other statistics in his lengthy article. He has mostly based these on selective numbers focusing on the years 2014 and 2015! Just in case he forgot, we midway into the year 2017!

As one can see, the Congress party has been lazy in its attempts to be a strong opposition party in the country. One recent example to exemplify their laziness. A video of Kerala Youth Congress folks slaughtering a cow was out on Saturday morning. Until Rahul Gandhi reacted to this “incident” on Sunday night at ~10pm, no one in the party even squeaked about this. Why does it take so long to even condemn such a ghastly crime?

All along, the Congress has either resorted to lofty rhetoric (which the people keep rejecting) or have resorted to selective quoting of numbers that don’t help in getting any message across.

The two images below are enough to tell why the Modi government is riding high on a wave of popularity, and why the opposition is finding it difficult to put up a brave front.