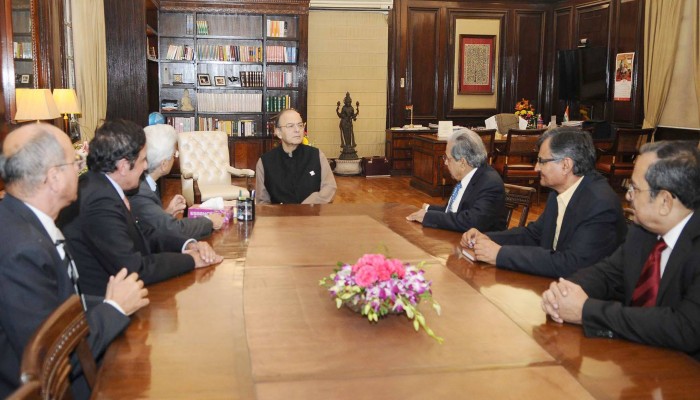 Last week, the Finance Ministers of Karnataka, Kerala and Andhra Pradesh, along with the Chief Minister of Puducherry met. The purpose of the meeting was apparently to highlight how the “South Indian” states are going to lose a lot of money because of the terms of reference of the 15th Finance Commission (FC).

The entire English media went berserk on this “South Indian” conference. They didn’t tell you that Telangana and Tamil Nadu did not send their representatives to this meeting. Have you seen a single article, anywhere in the English media, trying to analyse why only 3 out of the 5 southern states were part of this meeting?

Kerala is ruled by the Communists, Karnataka and Puducherry by the Congress, and AP by TDP which has been going hammer and tongs against Modi. Not a single article that talks about the political color of this meeting! Come to think of it, Telangana and Tamil Nadu are also ruled by parties that are *not part* of the ruling coalition at the center. What then explains this skewed representation?

What was the purpose of the meeting? Political parties ruling these states make this claim that they are exceptionally performing states and are at a great disadvantage if the 15th FC is asked to consider 2011 census as their basis for tax devolution. The claims are based on ill-informed articles in the English media, because the terms of reference of the 15th FC make it absolutely clear that performing states will be incentivized. These lies have been highlighted in an earlier article here.

However, this has not stopped the media from continuing to spread mis-information on the 15th FC. Caught lying on the performance based parameters, they have now picked up on the “constitutional propriety” of some of the terms! Let’s take, for example, the lead article in The Hindu couple of days back.

The author of the article is a member of the 14th FC. And makes some really contradicting arguments.

·        “..from the perspective of economic objectives, there is no justification in using 1971 population data as a factor in the horizontal distribution of funds.”

There is no justification, but the solution to a perfectly justified change is being silent? I am perplexed at this kind of recommendation coming from a member of the 14th FC! Modi government is perhaps the first government that is being castigated for doing the right thing! We move on to the next big point of contention according to this article:

·        Never before in the history of the country has a Finance Commission been asked to review the recommendations of the previous Commission on the grounds that it gave “substantially enhanced devolution”.

What exactly is the problem here? If the criteria of “never before” has to be applied for everything that we want to do, how can we even see any progress? Since the author is a member of the 14th FC, should we also then point out that “never before” has any FC proposed a 10% increase in the funds that state will get? Should they not have stopped from making such a recommendation then?

The rhetoric continues, with the following argument:

·        Asking the Commission to take into account the performances in implementation of various Central schemes is equally contentious.

Why does he find this contentious? No concrete answers are given for this question – just some rhetoric on fiscal federal fabric, etc!

Just couple of days earlier, The Hindu had an editorial  that screamed a strong headline – “Divided we Fall”! It doesn’t mention who is creating this divide. Substantial space is dedicated to the PM’s clarification to this controversy, and not to actually who and how this all started. Just one line – “ but framing the issue as a southern vs northern States debate is not constructive. “

Did the ecosystem realize that this is not constructive because their lies were called out? Did they suddenly realise that if they are infact performing states, then they will be actually incentivized? And therefore, now are falling back to other frivolous arguments, like the following

And the Centre’s attempt to increase its share from the divisible pool of resources from the present 58% is something that should concern all States, whether populous or not.

Here is the Gazette Notification. Here is an open challenge to The Hindu to point out where exactly is the centre making this attempt?! Amongst other things that the the 15th FC is tasked to consider, it has to also take the following into consideration.

I simply fail to understand the controversy and interpretations around this. There has been a huge increase in the devolution to the states, and it will obviously impact the centre’s finances. What exactly is wrong in studying that impact? If we go by how our media wants to generate controversies, then the central government should merely keep quiet on anything it wants to study!

Another editorial in Business Standard made the exact same points on April 12th. Picked up again by The Hindu’s editorial desk on April 14th. And further propagated in an op-ed article on April 16th! If there is anything we have to learn from this controversy, it is the amazing cohesion with which the ecosystem functions. A lie started by The Wire, led to a meeting of Finance Ministers of 3 states and CM of a UT. With the lie now busted, the ecosystem has moved on to the next lie, as if the first one didn’t even occur!

Amidst all this, it was very disappointing to see the centre’s lethargic response to this. Especially, when they have themselves drafted a very good ToR for the 15th FC.