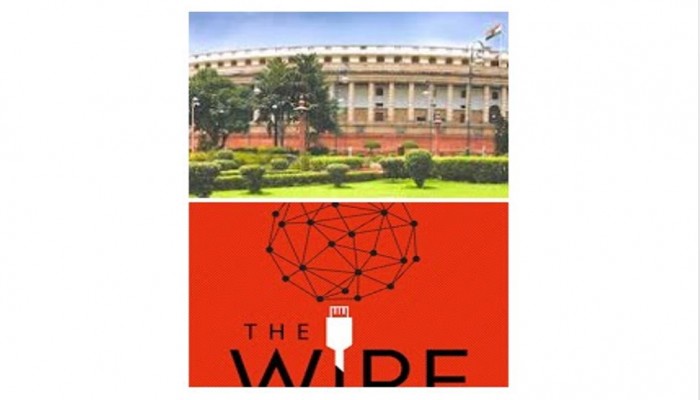 As the anger against the central government was rising in AP, an article appeared on the controversial leftist website, The Wire in February, 2018. This article was trying to analyze just one term of reference, of the 15th Finance Commission (that will come into effect for the years 2020 – 2025), and came up with an atrocious byline – “It is becoming almost untenable for Tamil Nadu and Kerala to thrive in the Indian union as rational, self-interested sub-units.”

“Is the success of south Indian states going to be used against them by Union of India??? This article flags a genuine concern that population-based formula for sharing tax revenues between states & Center would hurt south Indian states.”

This argument started gaining slow traction. TDP MP Mr. Murali Mohan made a statement that 5 south Indian states wouldn’t mind separating from the country too. This has created enough outrage on Social media, but the source of this outrage wasn’t too well known then. News reports have also mentioned that Chandrababu Naidu made an argument that South Indian states are being penalized, in his 2 hour 20 minute speech in the state Assembly. I haven’t heard the speech yet, so I have no way of verifying it. TRP-centric TV media even ran programs that discussed “Pawan Kalyan & Kamal Haasan to end South India's slavery?”

On Sunday, March 11th, Eenadu, the largest circulated telugu newspaper (And 9th largest circulated in the country), put this argument on the front page. They interviewed Shri V. Bhaskar, secretary to the 13th Finance Commission. The headline screamed – “Damage to the spirit of Federalism”. Below is a snapshot of their coverage on this issue.

What is the crux of the argument these folks are making?

While reading the article in Eenadu, I was perplexed when Shri Bhaskar made the following statement:

This is reconfirmed when we visit the Finance Commission website and look at the terms of reference of all the finance commissions. Up until the 6th finance commission, no specific guideline was given on which census data to be used. From the 7th FC (set up in 1977) onwards till the 14th FC (2015 to 2020), every single FC used 1971 data! Imagine using 1971 data for distribution model in 2015 – what explains this status quo for so many years? Isn’t it surprising that we used 1971 census data even 40 years later?

The issue of Tiny Fonts.

The Wire says that the change of criteria from 1971 to 2011 census “was done with such little fanfare and in fonts so tiny that it made one wonder if those who sought it wanted no one to take notice.”

Fonts so tiny? Such little fanfare? Please take a look at the Gazette notification. The font is the same across the entire document! The population criteria is placed at a similar place, as was done in all previous FC references. I, for one, fail to understand this penchant to dramatize non-existing problems?

The Wire tells us that “… the 14th Finance Commission…. gave a weightage of 10% for Census 2011 data”. So is it fair enough to assume that the remaining 90% weightage was from the Census 1971 data?

At first look, these numbers itself were very perplexing! Because the automatic assumption is that the remaining percentage is from the other census. It turns out that my assumption is wrong. The devolution formula has always included other aspects, outside of population. For example, this table picked up from a government website confirms such findings for 13th and 14th FC

What about the other key argument – should performing states be penalized?

And here’s where the chicanery of websites of The Wire, and the insincerity of bureaucrats (covered in Eenadu) come to the fore. Since most readers don’t bother to go and actually check the terms of 15th FC, they will automatically believe that there is no provision for rewarding the performing states.

Here is the truth. For the first time ever, the terms of reference for a finance commission included a number of “proposing measurable performance-based incentives for States”. A few earlier commissions considered fiscal discipline for incentives, but never has an entire section been dedicated to this.

There are a total of 9 parameters under which it has been recommended that performance can be measured. Previous FC’s for sure did not have so many parameters explicitly mentioned. The second parameter recommended is “Efforts and Progress made in moving towards replacement rate of population growth”.

In his interview, Shri V. Bhaskar has told us that a good “Replacement Fertility rate” should be less than 2.1. And there are many states that are currently higher than this. The terms of reference clearly indicates that states that have moved towards this rate should be considered for incentives.

The entire premise of the North India – South India argument was based on a lie that states that have made progress in terms of containing their population will be heavily penalized. The truth is that they will in fact get incentivized!

Not just that, please take a look at other parameters too. States that have done good in GST, Ease of doing business, grants for local bodies, sanitation, waste management etc – will all get incentivized. This is the first time that such measurable parameters have been placed in the FC terms of reference. The 15th FC is currently accepting suggestions too - shouldn’t we be spending our time in giving these inputs to the FC?

What then explains the deliberate attempt to spread such lies and mis-information? What the Wire published got mainstreamed into the politics of a state in India. A lie travels far before the truth wakes up. It is one thing to cast aspersions on methodology of a commission, or give suggestions based on available information. It is a whole different ball game to arrive at dangerous conclusions based on half assumptions! A ball game that many sections of media are perfecting!