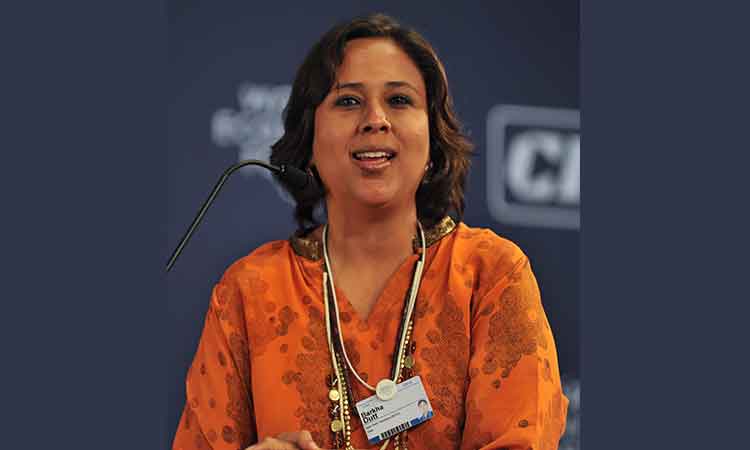 At the outset, I would like to express my sincere thanks to Barkha Dutt. It was because of her shoddy journalism while interviewing the HRD Minister of the country, I got inspired to write my own questionnaire addressed to the minister, through MyIndMakers. The minister was gracious enough to respond to the questionnaire in great detail, which gave me and many readers an insight into the actual working of her ministry! Me, an ordinary citizen, getting an opportunity to interview the HRD minister of the country â a rare opportunity that became reality thanks to Barkha Dutt!

For a very long time, I have not read any article that Barkha Dutt has written. Except for an occasional interview, I havenât watched her on TV too. She blocked me on twitter, so I canât even read what she tweets, unless someone is retweeting her.

One of her recent tweets was this:

This outraged a lot of people, because of her sympathetic description of a terrorist. This perhaps even prompted Hafiz Saeed to think Barkha is helping further his agenda. And one of those who outraged was Arnab Goswami, who went ahead and called out this hypocrisy on his channel. This in turn outraged Barkha and she went on a writing spree, while claiming that she âdidnât give a tossâ about Arnabâs opinion.

The writing spree culminated with this opinion piece on NDTV website.

I havenât garnered the patience to read her article. Her lofty headline that India should be worried about a news anchor, just put me off. But I have read her tweet in which she says Arnab Goswami has asked for a gag on fellow journalists and she feels ashamed about it. People are still trying to dig out the bit where Arnab actually said so â till now, they havenât been successful. But letâs leave that point aside, and wade a little bit into the past.

About a year back.

âBut Siddharth Siddharth â¦.. We also have to accept we didn't do full reporting.â

What is this full reporting about? âMedia did not do due diligence before presenting the church attacks as an example of some Hindutva backlash.â

Hey â I didnât say this. Neither did the BJP. Barkha Dutt said this to Siddharth Vardarajan. Yes â you are reading this right. In this 55 minute video, where they were supposed to interview the Environment minister of the country, at around 23:50, Barkha Dutt reminds Siddharth Vardarajan that they âdidnât do full reporting and due diligenceâ.

Rajdeep Sardesai hit a person. He played victim for 3 days saying he was hit, until a video emerged that showed the truth â it was Rajdeep who hit the person. Barkha tweeted her full support to Rajdeep.

Upon the emergence of the truth â Barkha Dutt just didnât bother to clarify if she still supports a person who lied so openly, to gain sympathy. The âcondemnableâ tweet still exists, by the way!

Dear fellow Indians â Should it not worry you that the NDTV anchor doesnât give a toss about the truth, and will go to any extent to support violent journalists?

There were massive protests in New Delhi over the Nirbhaya rape. On one of the days, reports started coming in that a constable died. Barkha Dutt immediately went ahead and told us that he died because the crowds went violent.

It later turned out that he died of a heart attack. NDTV took hours to confirm this, but Barkha quietly deleted her tweet and did not even apologize for such a horrendous error.

Dear fellow Indians â should this hurried exaggeration not worry you?

At about ~11:45 in this video interview, Barkha gets asked if she would expose paid media. She ponders and then answers -

"I am still uncomfortable on media doing stories on media."

Back when Radia tapes happened, she wrote this:

"While there is no doubt that journalists must be held to the same exacting standards of accountability that we seek from others..."

Media should not stories on media. If viewers/readers do stories, then they are trolls, stalkers, and what not. If government points out irregularities, then it is attack on media - then how exactly will a journalist then be held to the "exact same standard of accountability" that they seek from others?

Her recent writings have given the distinct impression that journalists cannot and should not be questioned, no matter what they say and do â the law can go for a toss.

Dear fellow Indians â should this hypocrisy not worry you? Shouldnât the distinct sense of invincibility worry you?

Therefore, I do give a toss.

I can dig more, and find more. I can dig more to find out similar instances when TIMES NOW would have given little regard to facts. I can dig more and show many instances of Rajdeep Sardesaiâs shoddy journalism. It is very easy to discuss the empty rhetoric of English TV media. I am no fan of Arnab Goswami either. His show with multiple users puts me off. His anger puts me off. I seldom watch his shows too.