Why and How did Atal Bihari Vajpayee inspired a generation of Indians? An account of his journey from a 13 day government in 1996 to 2018. 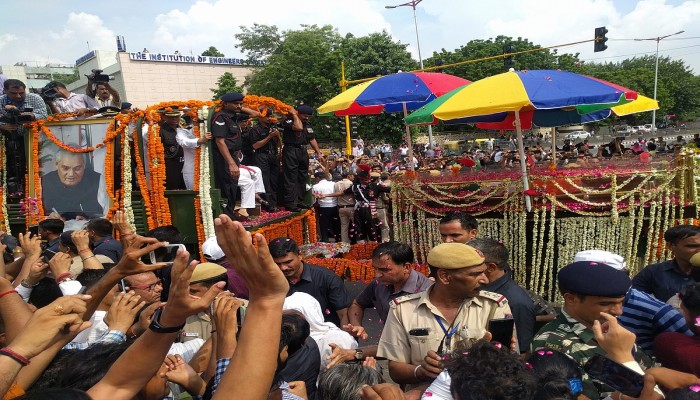 My friend and I reached home well in time to listen to Atal Bihari Vajpayee’s speech during the 1999 Confidence motion he had to bring in (and eventually lost by 1 vote). And then there was a power cut! I went berserk, and threw around stuff, angry at the electricity department! Then I called another friend’s house, to check if he had power. And when my friend’s mom confirmed they had power, but my friend was not at home, it still didn’t matter. We drove to his home and watched the speech there.

Looking back, I always wondered, how does one man evoke so much emotion in an 18 year old boy? One of the top reasons I could of was those two brilliant (did I say brilliant?) speeches in 1996 during his first motion of confidence. Up until that point of time in 1996, most of the citizens only read or heard about how Vajpayee’s oratory is mesmerizing. The 1996 speeches were the first time we got to see it real time, for considerable length of time, what effect Vajpayee’s oratory can have. He may have lost the vote in the Lok Sabha, but the countless votes he gained in the country because of these performances are testimony to his oratory.

The 1996 speeches (both while introducing the motion, and replying at the end of two day debate) show him at his expressive best; at his combative best; at his argumentative best; and at his statesmanly best. The manner in which he counters the opposition and their constant barbs can be watched countless times just so as to learn a lesson in debating skills!

But adulation through oratory can only take you up to a point. At some point we would want good speakers to even perform. And his second tenure that lasted 13 months (1998-1999) gave us all a glimpse of what can be achieved if this man will be at the helm of affairs. When he walked out into his lawns on 11th May, 1998 and calmly announced that “Today, at 15:45 hrs, India conducted three underground nuclear tests in Pokhran”, he had proved to the world how serious he is with his promises. Whilst the world was still reeling under the shock, we announced again on the 13th of May that two more tests were conducted! And large scale sanctions followed on the country. The Kargil war was also fought when he was the Prime Minister in this tenure – and yet when two such big events had occurred, he had managed the economy so well that we didn’t face any financial emergencies (like how we did from 1962 to 1970).

But then this is politics – so political games implied that he had to lose the confidence of the Lok Sabha by a mere 1 vote. Just 1 vote, and the country had to face elections again! And this time he came back with a full majority – the pre-poll alliance of NDA won 299 seats (pertinent to note here that UPA never won 272 seats with pre-poll alliances).

After he passed away a couple of days back, a number of eulogies now are telling us that he was the best PM India had. Of course, it is another matter that many of those writing these eulogies spent most of their time trying to defeat him in the 2004 elections! Why would you want India’s best PM to lose an election? But this article is not about the chicanery of these people. It is about how Atal Bihari Vajpayee changed the lives of an entire generation of Indians.

He rued back in the early 90s itself as to why we cannot provide something as basic as roads to our citizens! Pradhan Mantri Gram Sadak Yojana thus became a reality during his third tenure. Roads were built with breakneck speeds. No need to provide statistics here – the roads in our villages are living proof of this. I felt very proud back then when my village got a road too, and the board simply read – “Built with Pradhan Mantri Gram Sadak Yojana funds”. Villages were getting connected to their nearest town, thereby enhancing the opportunities of the villagers! This scheme also led to the reduction in Naxalism in a few districts – afterall why will Naxalism thrive when villagers prosper?

The Golden Quadrilateral was another revolution, both in scale and progress. Our highways started becoming wider, and opportunities started getting bigger! The telecom boom and revolution also happened during this time – the new telecom policy was unveiled, and mobile revolution took off in late 2003. The essence of all this was improving connectivity of the citizens of the country.

Even today, when you visit government schools, there are paintings on the wall talking about “Sarva Siksha Abhiyaan”. Launched in this tenure, the Prime Minister himself was part of the promotional campaign. The campaign envisaged a Right to Education to all, and ensured that children were joining schools and not going to work with their parents. Sarva Siksha Abhiyan created a revolution of sorts in rural India, the results of which are quite evident.

I can list more and more – the concept of a single unique number to every Indian (known as Aadhar today); freedom to information; disinvestments; new pension scheme etc – a lot of schemes still in vogue today were born during Vajpayee’s tenure only.

However, one my most favorite achievements of his is the 8% growth rate in 2004. Why does this rank so high in my list? At a time when India’s GDP was growing at 3 to 4% a year, Vajpayee declared that we will make sure India will grow at 7 to 8 %, Sonia Gandhi stood up in Parliament and called this has “Mungeri Lal ke haseen sapne”. And when Vajpayee demitted office in 2004, take a guess what was India’s growth rate? 8%. That’s right, “Mungeri Lal ke haseen sapne” after all became a reality. That is what Vajpayee taught us – that you should dream; that you should build your success brick by brick; that you should never lose hope; and that you must always remain Atal.

For all his niceties, Atal Bihari Vajpayee had to face one of the most virulent opposition ever. Please don’t get fooled by the niceties being employed today – even Atalji would have squirmed hearing all these things about him from these guys.  For a life that was so well lived, it was unfortunate that he had to go through a lot of pain in his last years (nearly 10 years, which by no stretch is a small period). However, he got one of the most befitting farewells one can every give him. His entire shishyagan, starting from Prime Minister Modi, his cabinet, the nearly 15 CMs, MPs, MLAs, party cadre – all walked alongside his mortal remains to see him off.

Thank you for all that you have done for us. We will never have someone like you walk amongst us again. Na bhootho, Na bhavishyath Atalji.