We have had a good laugh and enough fun at Rahul Gandhiâs expense, but it is now time that we question his incoherence and ignorance 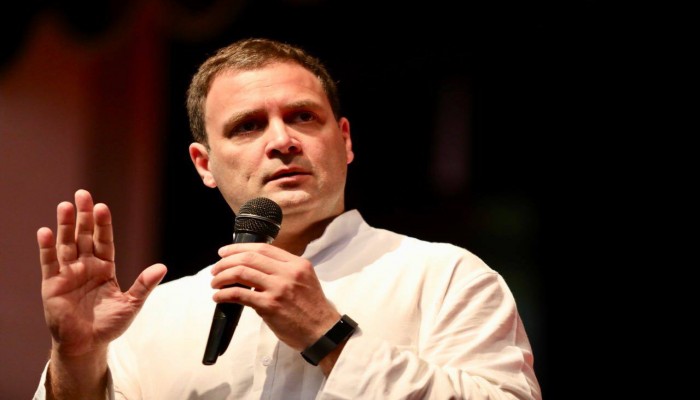 In almost every Indian school that we study in, the story of Gandhi’s three monkeys is drilled into our minds. “See no evil, hear no evil, Speak no evil”. Ask any school going kid, and he/she will tell you this without ever needing to refer to their notes.

If you were to write a speech for a political leader and ask him/her to refer to this story, it should suffice that you write – “Refer to Gandhi’s three monkeys”. In 2015, Rahul Gandhi gave a speech in the Lok Sabha. He referred to his speech and read out “Bura mat dekho”. He then said, “The second monkey used to say” and then sees his notes again and reads out “Bura mat suno”. And repeats this sequence for “Bura mat bolo”.

Don’t believe me? In this speech here, please refer from 0:56 onwards, and notice how he had to refer to his notes to even read out the simplest of lines, that almost every school going kid in India is familiar with. His speech sheet went viral then too – notice how the monkey quotes are written in red ink too.

Why am I bringing out an old 2015 video today? Because that incident is not an isolated one. His non-serious preparation into serious political and policy related speeches are such an embarrassment and need to be highlighted at every possible instance. Rahul Gandhi’s recent gaffes during Karnataka elections have created significant news on the social media and the regional media but hardly created a ripple in the English media. This would have been fine, if Amit Shah’s recent gaffe referring to Yeddyurappa instead of Siddaramaiah, didn’t go viral. The entire hierarchy of Congress, beginning with Rahul Gandhi shared it on his twitter account, and the English media happily lapped it up, to create an equal-equal debate between Amit Shah and Rahul Gandhi.

Rahul Gandhi’s first gaffe (in Karnataka) was when he made a vain attempt to quote the great Kannada poet – Shri Basavanna. Rahul begins with “Basa… Basavaji ne kaha tha”. And goes on to recite a poem that took people a while to understand what was going on. However, the most shocking of his gaffes came when he failed miserably to even pronounce, Bharat Ratna, Shri M. Visvesvaraya’s name. Take a look at this video to see how he struggles and makes no attempts to even apologize for this gaffe.

If an Amit Shah or a Narendra Modi or a Yogi Adityanath committed this gaffe, the entire hierarchy of Congress and the English media would have gone to town, on how this is an insult to the Kannadigas and how  BJP is imposing Hindi everywhere.

Rahul Gandhi’s gaffes are therefore not an exception. They are a rule. The gaffes aren’t limited to mere pronunciation errors. They extend to even comprehension problems. Rahul Gandhi has even equated every person with the surname Modi to be corrupt. He has told us that for every single selfie you take, a person in China gets a job! Yep, he really did that, *and* he has been seen taking selfies ever since, after that statement!

Earlier, the answer to any question was “Women Empowerment”. These days, the answer to any question is “Demonetization and GST”. Is this what we really want to hear? Is this what the English media and the ecosystem is trying to thrust on us? Is it not time for us to take a step back and realize that behind all those memes and videos mocking him as Pappu, lies a dark reality – that he is the President of the Congress party; that he has near no clue on any of the topics he is asked to speak about ; that this strategy of imposing his raw thoughts on this nation is actually dangerous to the nation; and that he might get to a position where he will decide upon the future course of policy of our country.