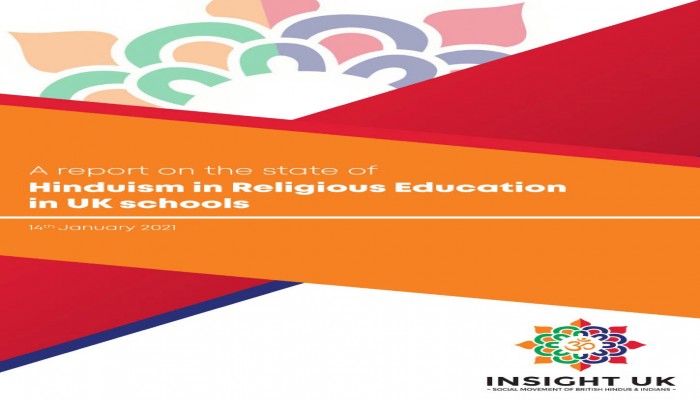 A report [1] published by INSIGHT UK today reveals that pupils leave school with an incorrect and sparse understanding of Hinduism. INSIGHT UK is an organisation that aims to address the concerns of the British Hindu and British Indian communities.

The document titled "A report on the state of Hinduism in Religious Education in UK Schools”, includes claims of bullying and inferiority complex issues experienced by British Hindus because of the inaccurate teaching of Hinduism in RE.

It states some disturbing findings, including parents highlighting misinformation spread by UK schools, for example linking gender disparity in education in India to Hinduism and linking social issues from South Asia to Hinduism. A teaching book even suggested that Hindus were turning to terrorism.

The report also provides evidence that the subject is not available for most students taking GCSE exams, despite Hindus being the third-largest religious group in the UK. The project by INSIGHT UK was supported and guided by major Hindu organisations in the UK. Asmita Bhudia, a Hinduism Tutor and School Teacher, says, “The choice is taken away from pupils and parents to accurately study Hinduism in many UK schools”.

INSIGHT UK carried out consultations and research with SACRE members, academics, teachers, and parents followed by a national survey, which is being described as one of the most successful Hindu surveys in the UK in terms of responses and coverage.

Data captured showed that the majority of British Hindus were dissatisfied with the teaching of Hinduism in UK schools and unhappy with teachers' knowledge of the subject. The report mentions that as a result, students in the UK schools are being deprived of the correct knowledge of Hinduism and hence of a true world view.

Recent research has claimed many schools were breaking the law when it comes to RE [2]. This comes at a time when Hindus have faced attacks for practising their faith [3].

This project of INSIGHT UK was supported and guided by the following major Hindu organisations in the country: