This is how Thiruvananthapuram M.P., Shashi Tharoor helped the Kerala Victims - by travelling across the world and tweeting 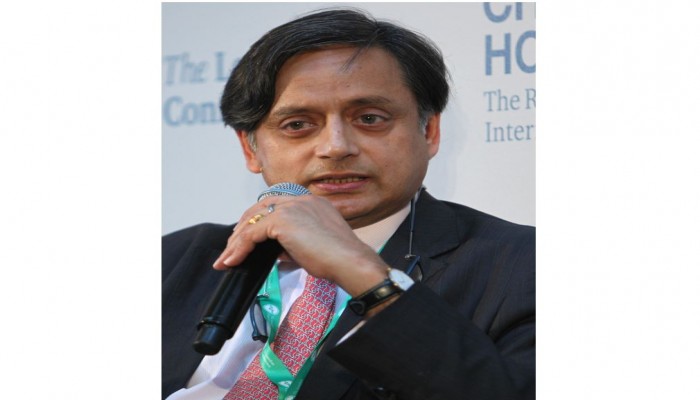 While reading the Central government’s press release that listed out the sequence of events and details of assistance provided to Kerala, the date July 21st stood out. At first I thought there is some typo error, because we have only been hearing of Kerala floods in August 2018. However, it wasn’t a typo. The Kerala government submitted an interim memorandum to the central government on July 21st, 2018 because the state was by then already affected by floods and landslides.

While by that time, the people of the country were beginning to already know the severity of the floods situation in Kerala, Shashi Tharoor was still busy tweeting self-images of him wishing a Happy Independence Day and critiques of the Union government. Amidst more Independence day tweets that included taking a potshot at “Sanghis”, Shashi Tharoor managed to insert a couple of tweets on “Images from rain-drenched Thiruvanthapuram today” and how he was “running around to take stock”.

At this point of time, it didn’t bother anyone that he showed up so late into the crisis. Long time residents of Thiruvananthapuram told him that they haven’t seen so much rain ever! It gives you, the reader, an indication of the severity of the crisis. A crisis, during which, their MP was missing.

Amidst all the “running around”, Shashi Tharoor suddenly found both the time and inclination to tweet this:

Quite expectedly, he was taken to task by the netizens on the need to divert his attention towards repetitive messaging when his constituents were facing the crisis of their lifetime. Shashi Tharoor then moved his attention to the media, and accused them of not covering the Kerala floods enough.

Understandably, most time on twitter on August 16th and 17th was spent on tweeting about the Kerala floods. With ofcourse a couple of Congress events that were honouring “young achievers”. Why Congress wouldn’t postpone such a program is beyond me, but then that’s Congress.  On August 18th, he even tweets that “today is the last chance to be saved alive”

And then on August 20th, we see a message from Shashi Tharoor that he has landed in Geneva! Apparently to meet with UN agencies.

You might be tempted to ask, why am I questioning this act of his, when it seems to be borne totally out of goodwill. Because on August 17th, the same Shashi Tharoor has told us that he cannot approach the UN because only the Indian government is authorized to do so!

What rules and laws have changed between the 17th and 20th that Shashi Tharoor infact rushed to the UN to seek help? Why did he tell us that he cannot seek UN help, on August 17th, and then on August 20th, we suddenly get to know he is in Geneva?! Why doesn’t anyone find this odd that the Thiruvanthapuram MP, who tweeted non-stop on how bad these floods even as late as August 18th (remember the line, last chance to save lives?), suddenly found it fit to leave the state and go to Geneva?

Next, he says he is in Geneva in close consultation with the CM of Kerala. Shashi Tharoor himself tweeted a media link that summarized his “efforts” in Geneva (we’ll come to that in a short bit) – and the media link he gave tells us that the CM hasn’t authorized Shashi Tharoor to talk to UN of the government’s behalf! Who then was Shashi Tharoor trying to fool?

Now, let’s still assume Shashi Tharoor went to the UN and achieved a lot. Here is a summary he has himself tweeted out on August 23rd :

Read through them carefully folks. And think. Think if we really needed an MP to go to UN and then come out with a “recommendation” that the “State Govt could carry out rapid needs assessment, sector-wide damage and loss assessments for recovery planning”? I mean, arent’ those some of the basic things any government would do? Or any agency in times of crisis would do? Is this what his trip to the UN achieved? Three recommendations? Three recommendations that are so basic in nature?

If you are still not convinced that Shashi Tharoor went out of Kerala purely out of goodwill and has been talking to the UN from August 20th (when he landed in Geneva) to August 23rd (when he tweeted out his “recommendations”), then here’s his tweet from August 22nd. Yes, August 22nd (I haven’t mixed up any dates).

Tell me friends – what warranted his jump from Geneva to Germany now? What possible value addition has he bought to both Rahul Gandhi and Kerala by his travel to Germany during these difficult times? Shashi Tharoor has confirmed on twitter that he has left Thiruvanthapuram on 18-19. Which means he was in his constituency for just 4 days, tweeting out images of significant destruction; telling us on August 18th that today is the “last chance to save lives” and then he leaves on the same night?! He even tweeted about his interviews to a couple of English channels and quite expectedly they didn’t find it fit to ask him about his absence in the state.

Let’s take his “I was in Geneva for Kerala” statement at face value.

Then what was he in Germany for? Was he also in London accompanying Rahul Gandhi? Because Shashi Tharoor only tweeted today (August 25th, 2018) that he is back in Delhi. Back in Delhi. Not yet been to Kerala.

Whilst central minister were already on the job from July 21st, Shashi Tharoor didn’t even find it fit to tweet about the severity of the floods from July 21 to August 14th. He tweeted about Kerala MPs meeting with Rajnath Singh on August 10th. Rajnath Singh himself visited Kerala on August 12th, whilst Tharoor could only make it by August 15th!

Perhaps instead of blaming the “national media”, it is time for Shashi Tharoor himself to reflect what difference his presence or absence even makes to his constituents? After all, why blame Delhi based media when you yourself cannot be there for your people? Hopefully you had enough time in your foreign tours for this reflection, Dr. Tharoor.