There is Genetic evidence against the Aryan Invasion Theory Myth 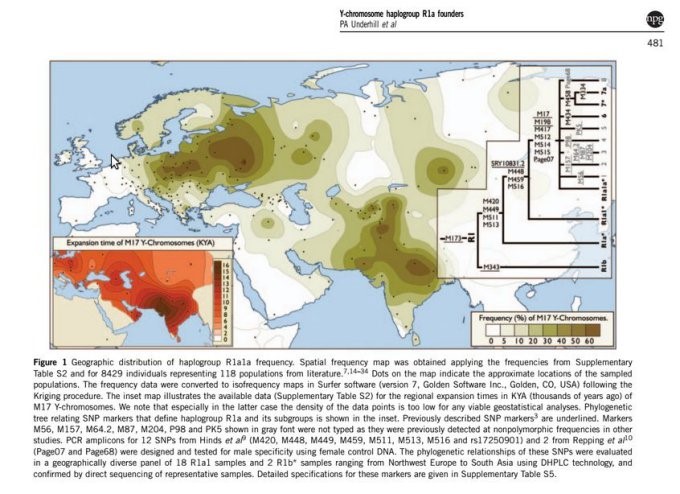 In a recent piece, Kalavai Venkat pointed out how genetics supported the Aryan Invasion Theory (AIT) & opposed the Out of India Theory (OIT). This post takes a look at his key arguments and offers a rebuttal. For an excellent read on the AIT-genetics debate, please read YugaParivartan's website.  And if you are short of time (TL;DR), read this summary and jump down to Conclusions/Postscript. I'm summarizing my main points below:

Point 1: is there evidence of Aryan Invasion into India, provided by genetics? No

Point 2: is there evidence of gene flow out of India? Yes

Point 3: does it mean OIT is proved by genetics? Not Yet

Point 4: was there ever an Aryan Invasion anywhere? Yes (in Europe). Not India

Introduction: At the outset, let me say that I am a fan of Kalavai Venkat's fight for Hinduism. I recommend everyone to get a copy of his book "What Every Hindu Should Know about Christianity". But on the issue of AIT, we differ.

Point 1: is there evidence of Aryan Invasion into India, provided by genetics?

Kalavai points to a paper by Priya Moorjani to argue that, if ancient ANI (Ancestral North Indians) & ASI (Ancestral South Indians) admixed, then these genes should show up in Europe, but it doesn't. Therefore, according to him, OIT is invalidated & AIT is validated. Is this view supported by this paper? No.

Firstly, the very paper that he quoted explicitly states that their data does not provide evidence of AIT (the author has underlined the portions):

It is also important to emphasize what our study has not shown. Although we have documented evidence for mixture in India between about 1,900 and 4,200 years BP, this does not imply migration from West Eurasia into India during this time. On the contrary, a recent study that searched for West Eurasian groups most closely related to the ANI ancestors of Indians failed to find any evidence for shared ancestry between the ANI and groups in West Eurasia within the past 12,500 years3 (although it is possible that with further sampling and new methods such relatedness might be detected).

To summarize, the paper states that the admixture in India between 4200-1900 years ago was a local affair (i.e. no Aryans). It also refers to another paper by Metspalu, which states that there is no shared ancestry between ANI & West Eurasian groups for the last 12500 years!

I noticed that Kalavai had responded in FaceBook to the above rebuttal that a recent paper by Poznik provides evidence of gene-flow into India during the supposed Aryan Invasion period. This new paper is titled Punctuated Bursts in Human Male Demography Inferred from 1,244 Worldwide Y-chromosome Sequences. But once again, we notice that this new paper does not validate AIT. The following is what it states:

The most striking were expansions within R1a-Z93, occurring ~4.0â4.5 kya. This time predates by a few centuries the collapse of the Indus Valley Civilization, associated by some with the historical migration of Indo-European speakers from the Western Steppe into the Indian subcontinent (27). There is a notable parallel with events in Europe, and future aDNA evidence may prove to be as informative as it has been in Europe.

The authors state that the population expansion in North/NW India 4000-4500 years ago might be associated by some to AIT. However, there is a fly in the ointment. The population expansion was within the R1a-Z93 haplogroup. Well, R1a-Z93 is an Indian haplogroup - i.e. it originated in India (15500 years ago)! So, any population expansion of this haplotype only proves that Indians intermingled with other Indians and produced lots of babies! It implies zilch about an Aryan Invasion. Like the Priya Moorjani paper above, this is a local admixture event and is not evidence of external gene influx!

This premature jumping to conclusions has happened before too. For example, when the R1a haplogroup was detected in both Europeans and Indians, AIT-supporters & even geneticists like Spencer Wells were quick to jump the gun & claim AIT-proof. Only to be proven wrong later when it was shown that the R1a1a* originated in India and is present in high frequencies even amongst South Indian tribals! (More on this in the next few paragraphs)

Another point made by Poznik briefly is this:

Actually, archaeology has been investigated extensively! Archaeologists (like B.B. Lal) are unanimous in their conclusions: there is continuity between Indus Valley & the Gangetic Civilizations of India. This continuity goes back to even Neolithic/Paleolithic times! There are no archaeological discontinuities (or material culture changes) that would have been seen if there was an Aryan Invasion.

Coming back to genetics, the following are some more genetics papers that rule out any substantial gene influx into India during the purported AIT dates:

Point 2: is there evidence of gene flow out of India?

Yes. Its the haplogroup R1a1a* M17. This has the highest diversity in India, pointing explicitly to its origin in India. A picture is a 1000 words. So including one below:

This is what Underhill had to say in his paper (from which the picture at the top was sourced):

Although the R1a1a* frequency and diversity is highest among Indo-Aryan and Dravidian speakers, the subhaplogroup R1a1a7-M458 frequency peaks among Slavic and Finno-Ugric peoples. Although this distinction by geography is not directly informative about the internal divisions of these separate language families, it might bear some significance for assessing dispersal models that have been proposed to explain the spread of Indo-Aryan languages in South Asia as it would exclude any significant patrilineal gene flow from East Europe to Asia, at least since the mid-Holocene period.

A similar point is again made in a different paper by Lucotte G. In their study, they found that the haplotype R1a-Z93 (found in Indians) is the most ancient (15.5 KYA), while its sister R1a-Z280 is oldest in Eastern Europe (12.5 years) & youngest in Northern Europe (6900 years).

Kalavai Venkat asks the question: "If OIT is true, where are the ASI markers in Europe?" The answer is as follows:

1.        As mentioned in the Priya Moorjani paper above, the last major ASI-ANI admixture happened 4200-1900 years ago (she doesn't claim that there weren't admixtures before, btw. We just don't know). So, its entirely possible that there was genetic isolation between ASI & ANI. So, when the ANI tribes moved out of India, they might have carried only trace amounts of ASI genes, which is why its not detectable in Europe in large numbers.

2.       Per OIT, the tribes would have moved out of India much before 4200 years ago (Mittani texts themselves are 3400 years ago, Kassites even earlier. Per Talageri, they are contemporaries of late Vedic texts). So, this outward flow of Proto-Indo-Europeans would have happened before the last major ANI-ASI admixture

3.       Last but not the least, as mentioned earlier, there is plenty of ANI gene outflow (from India to Europe) in the form of R1a1* (which is widespread in Europe). So, the relative lack of ASI markers in Europe proves nothing

Point 3: does it mean OIT is proved by genetics?

Even though several papers point out R1a1a* movement out of India to Europe, it doesn't automatically prove OIT. We need more evidence that shows that the timelines of this genetic spread (or any subsequent spread) coincides with the expansion of Proto-Indo-European (PIE) speakers out of India to Central Asia, Europe etc.

Point 4: was there ever an Aryan invasion anywhere?

Actually, yes. If you look at the genetics and archaeology of Europe, its strewn with examples of population replacement, gene-influx, changes in material culture (archaeology) etc. See the paper pointed out by Kalavai Venkat  (Massive migration from the steppe is a source for Indo-European languages in Europe). As Koenraad Elst points out, this is what an Aryan Invasion looks like. But in India, none of these evidences exist! No gene-influx, no population replacement, no material culture change, no nothing.

In summary, the defense of AIT on genetic-grounds rests on 3 primary observations, none of which hold water:

1.        Shared R1a1 haplotype between Europeans, Central Asians and Indians: this was supposed to be the genetic proof for AIT. However, it was subsequently discovered that R1a1* had its highest diversity in India, making India the homeland. So, if anything, it provided a quasi-evidence for OIT!

2.       Evidence of admixture between ANI & ASI between 4200 - 1900 years ago: once again, AIT-proponents claimed that this was proof of AIT. However, there is no evidence of a gene-influx. Rather, it is a widespread mixing of Indians with other Indians

3.       Higher percentage of specific genetic markers amongst Brahmins: this is once again, not proof of AIT. What genetic studies reveal is that ALL caste/tribal groups are native to India extending back 10000 -15000 years (Sengupta & other papers mentioned earlier). This destroys another favorite AIT-line that the invading Aryans became the Brahmins and the native tribes/Dravdians became the lower castes. Also note that, while there is haplogroup diversity & specific genetic markers in various Indian castes & tribes, this is purely an internal phenomenon. India has been continuously populated by Out-of-Africa ANI & ASI groups from at least 55000 years ago! There was also the practice of endogamy. That's a long enough period of time for a good bit of genetic diversity & caste/tribe-specific markers to emerge, without the need to invoke external Aryans.

People need to state clearly what they mean by "Aryan Invasion Theory". There is something called the "mainstream Aryan Migration Theory (AMT)", which involves Aryans trickling into India's North West circa 1500 BCE (3500 years ago) and subsequently composing the Rig Veda. "Invasion" became "Migration" because no evidence of the former was found. Now, "migration" has morphed into "elite dominance by a small trickle of Aryans" because genetics is increasingly showing a lack of substantial gene-influx.

Lets come to Manasataramgini. He is a well-respected Hindu blogger who is also a staunch AIT proponent. Kalavai's blog refers to him. One gets the feeling by reading Manasataramgini's posts that the version of AIT he advocates is different from mainstream AMT:

If that's the case, he/Kalavai needs to come out and explain what their theory is. And prior to debunking OIT, they need to demonstrate why mainstream AMT is wrong. We can then have a good debate.