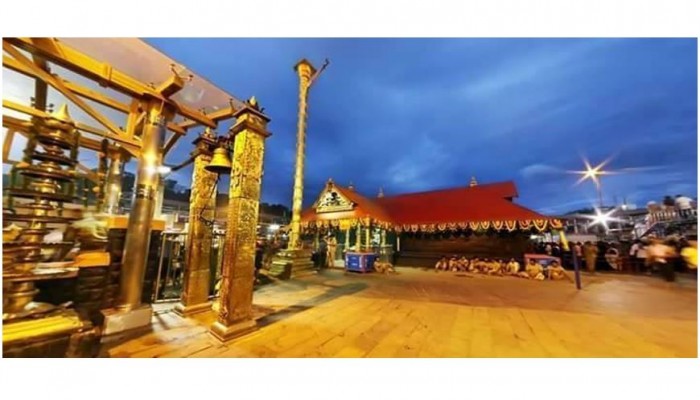 There are reports that young women and newly wedded brides entered the temple in the past. But during 1991, High Court banned women between the age of 10 and 50 from offering prayers at the temple citing the age-old tradition. Now during the month of September, the Supreme Court allowed women of all age groups to enter the temple and offer prayers. The ruling has led to mass protests by people who think that their right to freedom of religion has been violated.

There are two issues with the constitution. First, due to its ambiguous nature it allows arbitrary interpretation and often people in positions of power like judges, politicians interpret it in a way that suits them. For example, the constitution did not recognise rights of LGBT community in the past but now the same constitution grants them various rights. Here the constitution has not changed but the opinions of judges has changed and the same is true for this case and other cases. So, it certainly raises the question of basis and validity of all court rulings. The second issue is regarding the purpose of constitution. If constitution is the reflection of public will then it can’t supersede the collective voice of public as that would defeat the very purpose of it. Constitution is for the people and not the other way around as it is not some God given commandment that only few elites occupying important institutional positions could understand and dictate to the public.

The core part of the debate is that who owns the temple. One set of people claim that the temple is a public place and hence anyone could visit it while the people on the other side claim that the deity owns the temple and oppose the entry of women. They claim that temple becomes the abode of the Devata, consecrated after doing pran pratishtha ceremony as per the rules of Agama scriptures and His writ must be followed afterwards.

Now, if we assume that the temple is Lord’s abode then obviously it must follow His rules. If we take His word on this then the Lord has mentioned in Bhagavad Gita

I am equally disposed to all living beings; I am neither inimical nor partial to anyone.

Forget God, even Yogis don’t have such kind of discrimination like as mentioned

The yogis look upon all—well-wishers, friends, foes, the pious, and the sinners—with an impartial intellect.

Now if we compare the writ of God with the way temples are run, could we really claim that the temple authorities run it properly. Won’t it be against Lord’s writ to allow rich, powerful and those who pay to have His priority darshans when the Lord has explicitly stated that everyone is equal to Him? Won’t it be against Lord’s writ to prohibit people in the temple based on caste, gender, religion etc.? Won’t it be disrespectful to Lord to run His abode like a shop where even prasad is sold?

The discrimination and exploitation of people based on gender, caste, race, religion for millenniums by Pujari class at Lord’s abode must be stopped. Since God is impartial to all so everyone must be allowed on His premises, even those who we consider sinful and disbelievers as it is only God’s right to punish if someone violates any sacred ritual. Saint Kabir despite being a great devotee of Lord was refused entry to Puri's Jagannath temple just because he was Muslim. In the past, certain communities were denied entry in the temple by labelling them untouchables and in certain temples even people of lower caste weren’t allowed. Even nuns who dedicated themselves to the Lord (Devadasis), equivalent to Sanyasis, were exploited and made prostitutes.

One other argument raised by people who oppose women’s entry in the temple is that since Lord is Naisthika Brahmachari (eternal celibate), so women must not go near Him. This is just the case of judging the God with our narrow views and limited understanding. Lord is transcendental to all weaknesses of mind and rudimentary desires and He’d certainly not break His abstinence in the presence of women or any celestial damsels.

It is also true that there are several rituals mentioned in the Agamas shastras where a person observes certain rules and conduct, but those rituals should be observed by a person only at his private place and not inside the temples.

Also, Agamas are not considered infallible like Shruti. Like in the past, people of lower caste weren’t even allowed in the temple in the name of scriptures but today people from lower caste are also appointed as priests in same temples. Either temples cease to be temples today or people were exploited in the name of Agamas and the same is the case here.

The other issue we have here is whether the right to religion violates the right to equality and which right supersedes the other. In my opinion, it is just the case of misunderstanding of right to religion that causes this confusion. The right to religion certainly allows an individual to follow his traditions but it doesn’t allow people to impose it on others. Those women who believe in the ritual that women between certain age must not visit the temple could wait while those who don’t believe it could visit the temple. One can’t claim that since I observe some ritual then the other person must also observe it based on his right to religion. Customs and traditions can’t be forced on others in the name of welfare, but everyone is free to believe and interpret it in their own manner.

However, the right to religion certainly allows communities to construct monasteries and nunneries where people of only certain gender are allowed but that could not be equated to temples as temple is Lord’s abode and not something owned by any particular community.

The issue of liberty is closely associated with right to religion. Liberty allows everyone to interpret the religion on their own and follow it in whichever manner they seem fit, but such practice of beliefs must not be imposed on others and must not affect others.

For example in the past, when widows were forcefully burned after their husband’s death then those acts were violation of widow’s right to live but if someone believes in the Sati custom and wilfully wants to die on her husband’s pyre then it is her liberty to do so. We could advise the person against such rituals, but it is finally a person’s decision to choose his or her destiny.

So, even if we see the whole issue from this perspective, we’ll come to the conclusion that we could advise the person to not go in the temple as it might be harmful to them but we can’t make decision on behalf of them. That is their right to choose.

The issue is not about women equality or feminism or patriarchy but the true equality of every living being in the Lord’s abode. Faith is a personal matter but when it is imposed on others then it no longer remains personal.

It has become fashionable to impose one’s views on others in the name of person’s or social welfare and the same has been exploited by Pujaris and many other ideologies. The real dharma is to protect human rights and not to exploit and violate rights of others, which has been stated numerous times in Dharmic texts.