The protest against the Farm Bills is purely anti-farmer 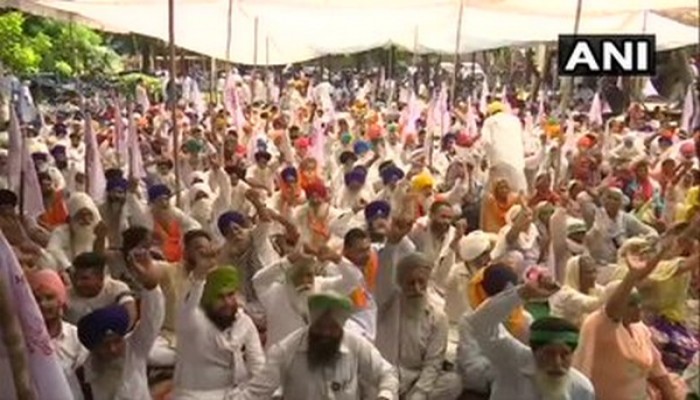 For the last two weeks, the Punjab Farmers are agitating over 'Three Agriculture Acts,' braving cold nights on Delhi borders enters. Since then, there is so much misinformation being spread about these Laws and what they mean for Indian Farmers. Here is an attempt to categorically go through these Acts' provisions and address the legitimate criticism, if there's any.

With this new legislation, the farmers will have the freedom to sell their produce to anyone and any market they desire. It is "in addition to" the current system, which will continue as it is.

Earlier, the farmers were restricted to selling only at Local Mandis. The Act removes all regulations and provides the farmers the freedom to trade - at the farm gate, cold storage, process units, etc. - wherever they wish. It will also allow barrier-free inter-state and intra-state commerce outside of the physical premises of markets (local Mandis) notified under State APMC legislations. The Mandis will no longer charge the farmers any Cess or Levies for the sale of their produce, reducing their transport costs. The e-NAM trading system will also continue.

So now, the farmers who could sell their produce only through State APMC (Agricultural Produce Market Committee or say, the Government as middlemen), can sell to anyone, including the APMC, if they so choose. It does away with the draconian diktat that a farmer cannot sell his produce to whoever he wants, and at whatever price he wants. Nowhere in the modern world are farmers beholden to the Government's whims for where they can sell their crop.

However, the malicious falsehood has been spread, causing serious concerns that the Government is doing away with MSP (Minimum Support Price). The fact is that the procurement at MSP will also continue with APMCs losing their monopoly. The Act only removes unnecessary regulations and bottlenecks unfairly imposed on the farmers from socialistic central planning days. Isn't it a good thing?

This legislation primarily deals with contract farming measures, providing the farmers' fair prices for their produce. This Act aims to provide legal protections to farmers entering into a contract with a buyer - processors, wholesalers, large retailers, or exporters, etc. The attempt here is to mitigate the risk of mighty corporate entities taking advantage of farmers and ensuring fair prices.

With this new legislation, the farmers also must receive a payment within three days as per the law. The Act also provides a local dispute redressal mechanism that provides a speedy resolution of disputes without farmers' legal fees.

The new legislation also makes farmers legal partners with buyers, where both parties benefit from an increase in the yield. It is in the interest of big buyers to provide modern technology, better seeds, affordable storage, efficient transport, and help farmers improve their productivity. After signing a contract, the onus is on the purchasing party to pick up produce directly from the farm, eliminating the cost of logistics born by the farmers. 35-40% of the crop is currently wasted due to the lack of cold storage facilities and an inefficient supply chain. With artificial bottlenecks removed, the transaction scale will force the corporate entities to invest in storage and logistics facilities at a much lower cost.

In short, this Act provides legal safeguards and a level playing field while also focusing on improving the efficiency and prosperity of small rural farmers.

This Amendment Act intends to remove restrictions/limits on how much of a crop can be bought in the market due to outdated, wartime laws that were put in place to ensure that the Government had stockpiles of "essential commodities" at hand.

It was an act from the era of war, famine, extraordinary price rise, natural calamity, etc., when the Government criminalized the crop produce possession over a certain quantity. It caused people to line up for rations for decades. Today, our farmers produce surpluses of all these crops. So now on cereals, pulses, oilseeds, edible oils, onions, and potatoes will not be classified as essential commodities. It will remove the restriction of scale in those crops that hurt the farmer, the consumer, and everyone in between.

The reality of the Minimum Support Price Mechanism (MSP):

The Indian Government sets the MSP for certain commodities twice a year. It's a price set by the GOI to purchase directly from the farmers to ensure they do not lose on pricing. In short, the MSP accounts for the money spent by the farmers on agricultural activities, plus the opportunity cost (losing out on another work), plus interest on capital spent, and also the cost of losing out on rent (opportunity cost of the land) of the agricultural land.

It is natural to feel MSPs are critical to the well-being of the farm sector. The truth, however, is that MSPs are mostly irrelevant. In 2015, the Shanta Kumar committee found that only 14% of the farmers could sell their produce to government procurement agencies. It is mainly restricted to a few states. MSPs matter to a small number of wealthy farmers in a small number of north Indian states like Punjab and Haryana. The majority of the small farmers do not even know that MSP exists and what the mechanism is. They are left at the complete mercy of the intermediaries. It is nothing but the continuation of the Zamindari system in which the rules essentially enslave the small farmers.

So, the pertinent question here is, what is this protest about, and why the agitation is limited to only Punjab and partly Haryana?

Both Punjab and Haryana thrive on producing a surplus of Wheat and Rice, which is procured by FCI for the national buffer stock. Both States have put heavy taxes on their Mandi operations. Punjab earned Rs 1,750 Crore in Mandi fees in FY20, and a similar amount in a rural development Cess charged on sales in the Mandis, while Arhatiyas had made nearly Rs 1,500 Crores as commission, paid by the FCI.

In September 2020, when these three Bills were passed by the Indian Parliament, in a clever gambit, the Congress Government in Punjab passed a law making the MSP mandatory (for wheat and paddy), making the sale/purchase of wheat and paddy below it, illegal and punishable with imprisonment.

Punjab accounts for 13% of the country's rice and wheat crop, but the benevolent FCI procures 26% of its overall procurement from Punjab. Government agencies procure about 70% of Punjab's wheat and 85% for rice output. Compare it with around 10% of wheat procurement at MSP from UP that produces double the Wheat than Punjab. The Punjab and Haryana farmers are almost entirely insulated from any market-risk. All this because there is no organized Mandi system in UP and Bihar (in Bihar, the APMC was abolished in 2006). Do you know that MSPs are transferred through DBTs except only in Punjab, where it goes through intermediaries?

Ideally, whatever the FCI-spends on its procurement should be divided equally among all states, either based on their population or output. Since the Modi Government has not proposed anything like that, logically, the farmers of the states like UP, Bihar, and West Bengal should be agitating, not Punjab's pampered farmers.

Another falsehood propagated around the Farmers Agitation is that the Modi Government passed the laws without any real discussion. The fact is that the APMC reforms have been discussed for decades, and in fact, these reforms were not only promised and advocated by the Congress, they were also part of its 2019 Election Manifesto.

Ironically, the Modi Government is seen fulfilling the promises of freeing the poor farmers from the exploits of the middlemen and touts in the Government and providing them choices. The hatred for PM Modi and every single scheme he comes up with made the Congress and its lapdogs conjure this game-plan of a high-pitched agitation around Delhi by deliberately misleading the farmers. It is an apparent attempt to try to corner the Modi Government and boost the Congress party's sagging fortunes. Suddenly you see, all those who promised these reforms in the past have joined hands against it, hijacking the protest.

Just look at the demands of these professional protesters, claiming to be the Annadaatas:

Why would our "Annadaatas" be so concerned about the rioters and the violators charged with anti-national activities? Not only that, what kind of "Annadaatas" would want legal protection for their right to gas us and the privilege to kill? Who are these people in the guise of 'Farmers?"

The aam Janata never suspected them until the Congress handlers, the likes of Medha Patkar, Yogendra Yadav, and the Shaheen Bagh's Bilkis Bano dadi joined the protest. Like before, the more the Modi Government shows its struggle to cope with this manufactured agitation, the more blackmailing the movement will become.

The protest against the Farm Bills is purely anti-farmers. These Acts intends to reform the agricultural sector that is severely under stress and handicapped by a mixture of the feudal Zamindari system and the Nehruvian socialism. In a country where a poor farmer commits suicide every hour, those spreading misinformation play dirty politics with the lives of the poorest in the farming society. These reforming Acts are not just a long-overdue necessity, but a moral imperative.