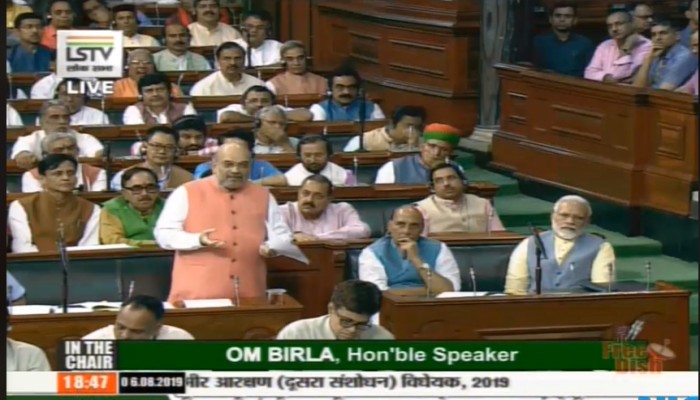 The constitutional problem of Kashmir emerges from the Article 370. Under this article the president, by issuing a notification, can nullify the whole article by application of constitution of India on Kashmir.

But here is an exception. In 1952 presidential order to amend the Article 370 was passed. But there was no state assembly then. Then, the recommendation and consent of Constituent assembly was deemed enough to make changes in Article 370. So, legally, an exception was created in 1952 itself.

No sane party would fight Jammu and Kashmir election with removal of 370 in its Manifesto. But BJP did. The question is why? The answer for this is very simple. BJP realized that as a nationalist Indian party it can never win a majority in Kashmir. So, to amend 370, they must do something else.

Their strategy was simple, if they cannot get Majority in State Assembly of Jammu and Kashmir, then make sure to make it irrelevant. How? By transferring the power to recommend and consent to Parliament through governor.

When Article 356 of the constitution is applied on a state after the dissolution of assembly, the power to legislate moves to the parliament. But Article 356 cannot be applied to the state of Jammu and Kashmir directly. Under section 92 of the constitution of the Jammu and Kashmir Constitution, there is provision of minimum six months of governor’s rule before governor can recommend President Rule under article 356.

So, the task for BJP was cut out.

1. Get enough seats in State legislative assembly to make a coalition government

2. Remain in coalition till BJP gets enough seats in Parliament to pass a bill regarding Jammu and Kashmir.

3. Pull back from the coalition and make sure that no other coalition is formed till President’s Rule.

So, BJP started coalition government in 2015. They kept diverting the focus from their real intentions. They kept using words like Development, Kashmiriyat, Youth and Jobs etc., to make opposition believe that they are targeting majority in state Assembly.

They also started creating divisions in National Conference and PDP cadre. This was easy as they were Position of Power. It is easier to create Vested interests if one has power. They were very successful in doing so. They created rift in PDP.

In July 2018, 5 rebel MLAs resigned from the PDP. This was a serious situation for Mehbooba mufti. BJP diverted the attention. Now, there seemed a possibility that BJP maybe able to create enough rebellion in the ranks to reach Majority mark. But this was far from reality. Because, if an MLA wants to change party after election, they have to resign from the party and fight election again under the Anti Defection Law. But fighting an Election on BJP ticket was a political suicide. So, there was still an assurance that BJP would not be able to win Majority in J&K. Thus there was no Challenge to the power of these two parties

But BJP had another trick in its pocket. Under the leadership of Sajjad lone, a party called People’s conference was formed. Now this was a big challenge to NC and PDP both. Because this Kashmir origin party was certainly capable of winning seats in assembly elections. This kept PDP and NC very busy.

So, the stage was set.  On 20th of June 2018 BJP withdrew support and Governor’s rule was enforced. Now, all BJP had to do was to keep PDP and NC busy in infighting for 6 moths so that President’s rule can be applied.

But both parties got sniff of it. They hastened their effort to form a coalition. Meanwhile Sajjad Lone was creating pressure. But this pressure was not enough. PDP and NC combine were far ahead of Majority even after the rebellion in ranks. In the meantime, BJP changed the governor of state. NN Vohra was replaced by Dr Satyapal Malik. This spooked both parties further.

On the last day before the change of Secretariat to Jammu from Kashmir, Mehbooba mufti tried to meet Governor with support from 56 legislators. Meanwhile Sajjad lone also wanted to meet Governor. Unable to contact him through phone, they tried to send Fax. But the fax machine was ‘allegedly’ not working on that day. This created a huge furore in media. Both parties accused BJP of doing foul play. They alleged that the governor intentionally cut off every way to contact him. But the damage was done. The historic Fax Machine was now going to fix 70 year old problem.

In absence of any possibility to form coalition, governor declared dissolution of assembly in November. This created another controversy since still nearly a month was left before president’s rule would come into force. But the Governor didn’t relent. A month later president’s rule was applied. Under the article 356, the consent of state was now with the Central Government through Governor.

Now, all BJP had to do was to win the Lok sabha elections with a huge majority so that they get enough numbers in lok sabha. This was important because in case they were unable to pass the bill in Rajya Sabha there was an option of Joint session.

The plan was to create two union territories using the power vested in Articles 2 and 3. Any bill using these two articles can be passed with simple Majority as it is not considered a constitutional amendment under Article 368. It can be passed through joint session also. So winning Lok Sabha with big numbers was important.

But there was still a chance of judicial activism from our Supreme Court. To nullify any such event and to keep the famous Legal Brigade away from this legislation, BJP devised an ingenuous plan. They passed a bill extending benefits of Reservation of SC/ST in Jammu and Kashmir using consent of Governor. This bill was the test to see off any legal challenge that the bill to reorganize J&K would face in future. The famous legal Brigade could do nothing since their whole support base lies in SC/ST community. The judicial activism was also contained as no judge could afford to be seen as anti-Dalit.

Now the time was ripe to pass the bill reorganizing state of Jammu and Kashmir. And as expected BJP was able to pass the bill through both houses of the parliament. The consent of State was obtained through governor who works on directives of president under president’s rule under article 356. And the President always works on the directives of Union Council of Ministers. Thus it was obtained by the central council itself.

So, BJP managed Opposition, legal challenges, Media and Naysayers in its own ranks to nullify Article 370. Since it is not an amendment, the article 370 remains as a relic in Constitution. Once all the fundamental and legal rights are extended in Kashmir, it would be next to impossible to take them away.

If Chanakya was alive today, he would be proud....