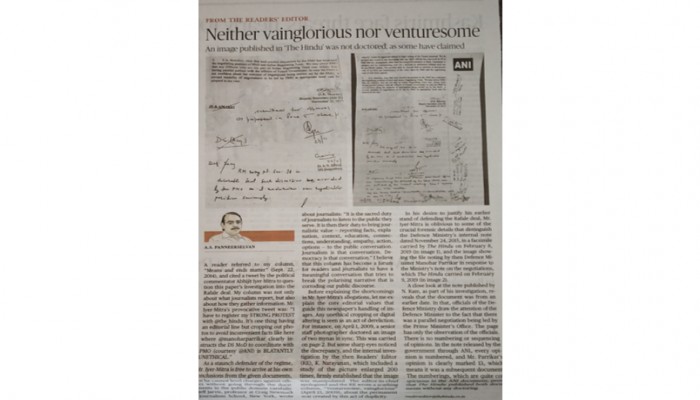 “Neither vainglorious not venturesome”, screamed the headline of this week’s Readers Editors column of The Hindu. Just so you get a measure of how much print space this alleged clarification got in The Hindu today, look at the image above.

What is all this about some glory going in vain? You would recollect how N. Ram and The Hindu allegedly published a cropped defense note. #CropItLikeTheHindu was the top trend on the day The Hindu got exposed for relying an entire report on a cropped document. The moment ANI and the Defense Minister outed the full document, which very clearly showed the Defense Minister’s noting too, one would have imagined The Hindu will take a step back and say sorry.

This deserves a slow clap. Along with a standing ovation. Such “crucial forensic details” should further be employed by our investigative agencies immediately! But seriously, dear The Hindu, what happened to you? Why are you embarrassing yourself day in and day out? You actually don’t realise your lies? Have you become that delusional?

Why do I think you are delusional? Let’s take a look at the note N.Ram published. In the image below, I am also highlighting something at the end.

This signature is cropped. You can see the ANI document to understand that. The note you originally published has been cropped to the exact pixel where “RM” is written on the left side. Take a very very close look. It is cropped to exactly the point where RM’s response begins. I wonder why this “crucial forensic detail” escaped your attention.

Now let’s assume that the note N. Ram got was an initial version and did not have the RM’s response in it. If so, why crop the signature? Why not just show us the full document that has been received by N.Ram? What great journalistic value is stopping you from publishing the original full note that N.Ram has received?

Immediately after being caught, the spin put out by team Hindu would have put Anil Kumble to shame. They started claiming that the ANI document is new proof. And that the comments by the Defense Minister are even more damaging. Now, let’s assume they are indeed damaging. Then why would you want to NOT publish them in the first place?! Let’s now assume the document N. Ram got didn’t have RM’s response. Wouldn’t any journalism student want to first find out if the Raksha Mantri had responded to this note, given how the file was sent to him?!

Bottom line – N. Ram either cropped the document on purpose or was a lethargic journalist in not attempting to find out the Raksha Mantri’s response! This “crucial forensic detail” of numbered sequences is merely a whitewash and infact insults the intelligence of today’s reader.

The Readers Editor is a unique institution of The Hindu. He publishes a clarification column every day, where in factual errors and typos are rectified. And every Monday, he writes a column, about whatever topic he wishes to. The first RE often discussed readers concerns. The second RE occasionally discussed readers concerns.  The third and the current RE, rarely discusses readers concerns and often ends up taking the side of the newspaper. I would have loved to call today “crucial forensic details” as the nadir, but I am very confident that The Hindu has some more depths to plunge. So for today, let’s just slow clap at the alleged clarification!