The Hindu leads by example, it shows Rahul Gandhi what 'pliant media' is - By being more pliant towards him. 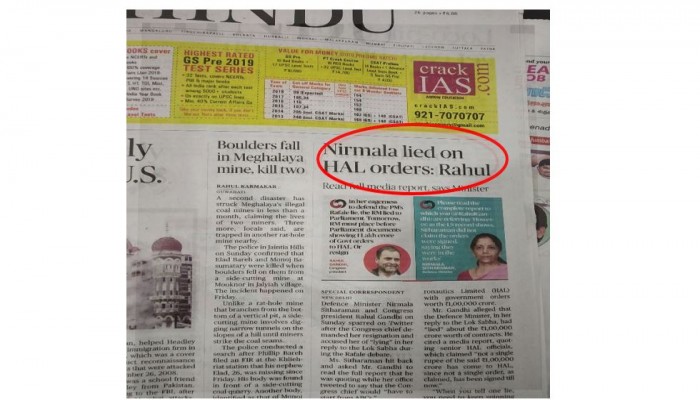 “Pliant media” thundered Rahul Gandhi. I couldn’t agree more with him. Almost as soon as he said this, “India’s National Newspaper”, The Hindu gave us an ultimate glimpse into what a “pliant media” means.

The picture above is their front page on January 7th, 2019 (Hyderabad edition).

Continuing with his series of lies, Rahul Gandhi yet again accused India’s defense minister of lying to the Parliament. Within minutes, Nirmala Sitharaman busted his lie on twitter. But notice how the Defense Minister’s response is relegated to a smaller font. Also notice how The Hindu has done no analysis of the original Times of India report. It is very painful to see The Hindu, which helped unearth the Bofors scam, to not do any kind of basic analysis. However, something even more painful happened the next day.

Since Nirmala Sitharaman cannot afford to be as irresponsible as Rahul Gandhi is, she dutifully made a statement in the Lok Sabha too, busting Rahul Gandhi’s lies. She did this on January 7th (Page 42 of this Lok Sabha bulletin). So one would obviously expect that “India’s National newspaper” will front page this on January. Here is the front page of The Hindu on January 8th.

You cannot find any news item. You can only find a small box in the top right corner that says “Nirmala Sitharaman, Rahul Gandhi continue war of words on HAL”.

So Rahul Gandhi’s wild, irresponsible and negligent comments are put on front page as if they are the gospel truth, but government’s official documents and responses on the floor of the Lok Sabha get relegated to the 10th page. Aren’t you also forced to now agree with Rahul Gandhi on “pliant media”!

This is not the first time this “pliant media” is being called out. We had earlier mentioned how The Hindu carried out a vague editorial that was full of contradictions. Despite getting clear cut answers to many of the questions, The Hindu still conveniently repeats ad nauseum the same questions that Rahul Gandhi does. In fact, The Hindu has suggested a “private briefing to opposition leaders”! This is an amusing suggestion because The Hindu really wants us to believe that a “private briefing” will change Rahul Gandhi’s mind?

Rahul Gandhi’s lies have crossed every possible limit. Yet, “pliant media” has been shielding him to an unbelievable extent. In an effort to make every statement of Rahul Gandhi look true, the media is competing to prove who is more “pliant” towards him! I will leave it to you, the reader, to decide whether such competition is even desirable.