TDP pull out of NDA- The Special Status Debate has moved away from facts and is now an Emotional One. 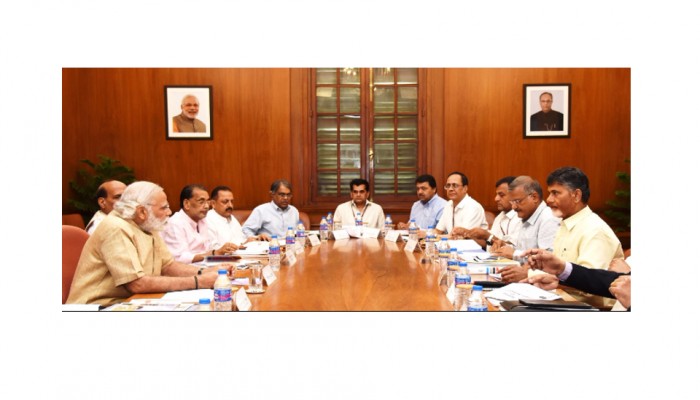 As expected, the Telugu Desam Party has pulled out of the Central government. And of course, the BJP ministers in the AP state government will also be resigning. Why was this widely expected? Since 2016, there was widespread anger against the BJP government at the center for taking a long time to fulfill the promises made in the disastrous 2014 AP Re-organization act. We haven’t seen this much movement since 2016 and today marks the end of the waiting period for TDP’s much anticipated action.

Writing about this topic back in 2016, I mentioned the following:

“The two key areas where the people of Andhra Pradesh are very keen to see an urgent solution is the establishment of a new railway zone in the State (as mentioned in the bifurcation Act), and the granting of special status to the State. Suresh Prabhu was recently elected to the Rajya Sabha from Andhra Pradesh, and people are hopeful of the new railway zone (after all, it’s all give and take in politics).”

“Indian Railways shall, within six months from the appointed day, examine establishing a new railway zone in the successor State of Andhra Pradesh and take an expeditious decision thereon;”

Look at the chicanery of the Congress party. They didn’t technically promise a railway zone. But they only promised a feasibility study within 6 months. Which means that if the feasibility study says Zone not possible, then the promise is gone to winds!

Anyways, a railway zone was seen as a great employment generator and also as much-needed autonomy for the Vizag region. For some weird reason, the Modi government hasn’t bothered about the six-month timeframe promised in the act. As recent as February 2018, Railway Minster tells in the Rajya Sabha that the center is still studying all proposals!

The perception has gained ground that a new zone to Vizag would mean Odisha having to give up many employment opportunities. Bad press in Odisha would mean a loss to BJP in that state, where it is seen as gaining ground! And so the anger against the Modi government has been building up a lot since then. Today it hit the boiling point.

Let’s talk about the special status next. The biggest of all the demands, during that hasty bifurcation process, was granting of a special category status. And this was not included in the Bill that was passed in the Lok Sabha. And since the support of BJP was required to pass this in the Rajya Sabha, the then Prime Minister, Manmohan Singh, made a statement on the floor of the house that the Central Government would grant this status to AP, but cannot include it in the bill at that moment because there was no time to go back to the Lok Sabha again.

Venkaiah Naidu had also vociferously argued that the status should be granted for 10 years and not five. However, after coming to power, the NDA Government has shown a lot of reluctance in granting this status to Andhra Pradesh. Arun Jaitley and Venkaiah Naidu, literally held a midnight press conference, to give the state almost all benefits that will accrue to it, in case a special status was granted. At the beginning, this seemed to have assuaged some feelings, but off late it came to light that those these benefits were announced, they were not actually released!

And since this was heating up, the other unfulfilled promises were being highlighted too. For example:

We are the beginning of 2018 now. ISRO has given written objections for the port at Duggirajupatnam. The center has asked the state government for another recommendation. The state government has expressed its inability to do so. And now, at the beginning of 2018, we don’t even have a town name to build a port! The Congress, without studying feasibility has promised a port, that ISRO has raised serious objections too! The BJP, by putting it in extended limbo, has aggravated the situation.

“2. SAIL shall examine, within six months from the appointed day, the feasibility of establishing an integrated steel plant in Khammam district of the successor State of Telangana;

3. SAIL shall, within six months from the appointed day, examine the feasibility of establishing an integrated Steel Plant in YSR District of the successor State of Andhra Pradesh;”

I don’t have to tell you what the status of this “examination” is. Already people have started agitating on why Kadapa steel plant hasn’t materialized yet.

The Polavaram irrigation project is a lifeline to the state of AP. And as with any big project, is taking a very long time to build. The Centre has agreed to fund the project in its entirety, and in a unique decision, has also given the responsibility of constructing this to the State government itself. The targeted date for completion was 2018. We have recounted how a recent notice by the central government snowballed into a major issue that required bigwigs of both parties to get involved!

The BJP has failed in communicating effectively to the people of AP on what it has done, and what it will do to remove these hurdles. Even Venkaih Naidu’s elevation to Vice President of India, has been seen as a demotion to him – because he was seen as fighting a lonely battle while being part of BJP!

The people of AP are right in expecting that the center fulfill what has been promised. Since we are 4 years into the promised 10 years to finish all aspects of the bifurcation, it is only fair that they at least show a path towards fulfilling them. This debate has far moved away from factual arguments. The issue is emotional one now and needs to be treated as one.