Sordid story of theft of Antiques in Kerala Temples 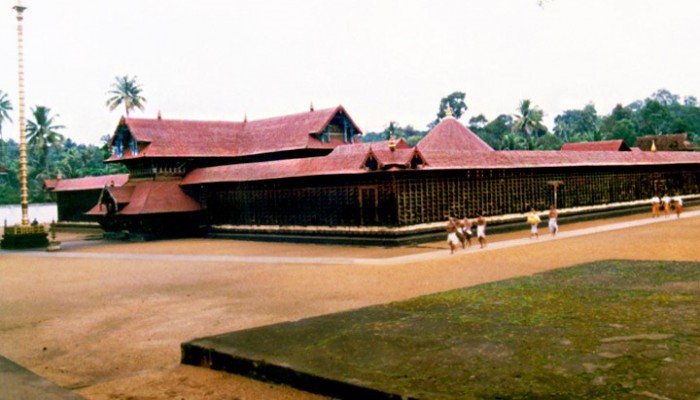 Malayalam dailies have been reporting about a move to 'refurbish' the famous ''Ezharaponnana''(seven-and-a-half golden elephants) of Ettumanur Mahadeva Temple in Kerala. The Advocate Commissioner, who is appointed to supervise the repair works of the building projects related to Temples, has reportedly recommended the 'reconstruction' of the antiques. The Travancore Devaswom Board has a special officer in charge of the Thiruabharanam, sacred ornaments, and valuables, who is responsible for the handling of the valuables. However, as per the report of Janmabhumi, the Advocate Commissioner has not consulted with the Devaswom Board authority before recommending for repairs.

The 'Ezhara Ponnana' procession during the annual festival at Ettumanoor Sree Mahadeva Temple in Kottayam district of Kerala is a very magnificent sight. The King of Travancore, Anizham Thirunal Marthanda Varma wished for the offering of Ezhara (seven-and-half) Ponnana' (golden elephant). Although King Marthandavarama, passed away, his successor, Dharmaraja finished the work and presented the elephants before the Lord.  Each of the seven elephants is two feet high, and the eighth one is only half the size. Hence they are together called seven-and-half elephants. The ''Ezharaponnana'' represents the ''Ashtadiggajam'' which are ''Airavatham'', ''Pundareekam'', ''Kanmudam'', ''Anjana'', ''Pushpadantham'', ''Supradeekam'', ''Sarvabhauman'' and ''Vamana''. The Ezharaponnana are taken out from the special secure room only during the annual festival of the temple during the procession of the devata, Ettumanoorappan (Mahadev). The darshan of the Ezharaponnana is very significant as it is considered to be the symbol of prosperity.

The same agent was associated with the controversial melting of antique gold caparison (ornaments put on the elephant while parading in temple festival) of the Shree Purnathrayeesa temple, Tripunithura. Deflecting from their responsibility as mere caretakers of the temple and its affairs, the Devaswaom Board and the temple management committee, endeavoured to use the Maharaja's gold caparison for making a brand new caparison. Though the royal family members interfered by approaching the court, the antique ornament was destroyed in a hurry without waiting for the copy of the court order.

The King of Cochin offered gold caparisons composed of rare and precious gems for Lord Purnathrayeesa in the sixteenth century. Maharaja Rajarshi Ramavarma had to sell fourteen of the caparisons to bring railway to Cochin. He kept one Caparison so that the best headgear can adorn the elephant carrying the devata during the annual temple festival.  The headgear was in use till Feb 2016 but Cochin Devaswam board melted the antique gold elephant caparison flouting all rules and procedures.  Devotees allege that the same forces behind the destruction of the antique pieces have posed a threat to other Hindu temples too.

Earlier, the Court stopped move to transfer all valuables from the Sree Poornathrayeesa temple, and Chottanikkara Bhagavati temple in Ernakulam to the Devaswom Board headquarters at Thrissur. Antique gold lost is lost forever. Still, the temple management shamelessly defends the misdemeanour exploiting the lack of uproar in the mainstream media and among the Hindu community. Had the Royal family members not challenged the dissolution of Antique Gold ornament by the Temple management, perhaps nobody would have cared. An agency appointed by the secular govt destroyed the gold caparison offered to Sri Poornathrayeesa, and entire country failed to correct the injustice. Surprisingly, the prominent leaders of the organisation of the community also turned a blind eye over the loss occurred to the heritage and temple.

The installation of the new Dwajasthambha (flag mast) in Sabarimala also was supervised by the same attorney who was the amicus curiae in the case, and the event ended in controversy and damage to the mast. There was an instance of court acquiting the Devaswom officials and other accused of mishandling the ancient 'Great lamp' of Haripad Subrahmaniam Swamy temple for lack of ample evidence. The news did not attract the attention of a majority of the media and people.

Interestingly due to ignorance or apathy caused by abundance, our people, tend to be insensitive to the value of heritage and antiques. Despite having instances of malpractice over the valuables in the temples, the attempts by the temple administration to repair, and melt antique ornaments and artefacts in Kerala do not evoke much debate. People often dismiss the 'repairs' thinking that old metal is less valuable than a brand new object.  The apathy of the local populace regarding the mishandling of the sacred objects by the management enables further malpractices. Otherwise vocal leaders of the Hindu organisations also observe total silence over the controversies surfaced regarding the melting and restoration works occurred in Kerala temples. What shall be done to protect the heritage of the Lords of the land? We should not be late; theft of the precious wealth of Hindus should not be allowed in the semblance of repair and renewal.