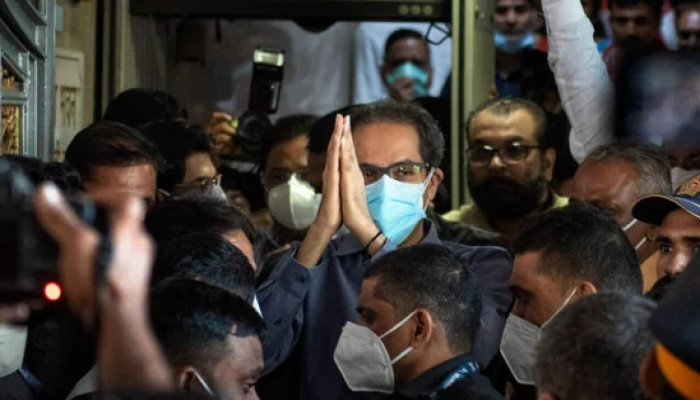 On a day of aggressive posturing, Maharashtra Chief Minister Uddhav Thackeray lambasted rebel MLAs, saying that no one would be allowed to misuse the name of Shiv Sena and its founder Balasaheb Thackeray, putting the Eknath Shinde-led mutineers on the backfoot.

Chief Minister Uddhav Thackeray chaired a national executive meeting in Mumbai on Saturday, as the drama in his party unveiled into a full-blown political crisis, threatening to bring the MVA leadership down in the state.

Addressing the media after the meeting, Shiv Sena MP Sanjay Raut lashed out at rebel leaders, saying "If you want to ask for votes using a name, use your father's name, don't use Shiv Sena's father's name." "Some people are asking me to say something but I've already said that they (rebel MLAs) can do whatever they want to do, I won't interfere in their matters. They can take their own decision, but no one should use Balasaheb Thackeray's name," the CM had said.

Earlier in the day, rebel MLA Deepak Kesarkar announced that the rebel faction would be known as Shiv Sena Balasaheb and they will not merge with any party.

After the national executive meeting chaired by Maharashtra Chief Minister Uddhav Thackeray passed resolutions against Eknath Shinde and rebel MLAs, Shiv Sena wrote to the Election Commission (EC) to ensure that Balasaheb Thackeray's name is not used by the Shinde camp, sources informed.

In a letter to EC, the Uddhav faction stated that 'no one has the right to use the name of Balasaheb Thackeray and Shiv Sena'. This development comes after sources informed that the rebel brigade is likely to identify themselves as 'Shiv Sena - Balasaheb Thackeray'.

The party's national executive is expected to authorise Thackeray to make decisions regarding the organisation in view of the rebellion by Shinde. Along with Shinde, another disgruntled party leader and former minister Ramdas Kadam are expected to face action. Both of them are members of the national executive. Kadam's son MLA Yogesh Kadam has joined the rebel camp in Guwahati.

Earlier on Friday, Thackeray convened a meeting of the district chiefs virtually wherein he said that the rebel MLAs who are camping in Guwahati want to "break the party". Targetting Shinde, Thackeray said that he did everything for the rebel leader and yet a lot of allegations are levelled against him.

Meanwhile, Maharashtra Deputy Speaker has issued a disqualification notice to 16 rebel Shiv Sena MLAs of the Eknath Shinde camp, who are currently camping in Assam's Guwahati. The MLAs have been asked to file their replies by Monday, June 27.