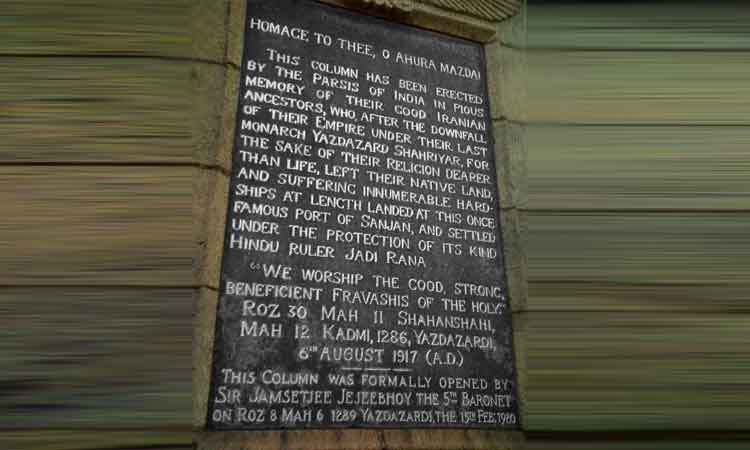 November 17 is celebrated as Sanjan day - the day the Parsi community is said to have landed in India. Known in India as Parsis for being originally from Persia, they follow Zoroastrian religion. When they arrived at a little town in Gujarat called Sanjan, the local Hindu king Jadi Rana or Jadav (Jadeja) Rana gave them shelter and permitted them to practice their religion and traditions. The first migratory wave is estimated to have brought 18,000 migrants. Although the group that landed in Sanjan is believed to have been the first, the precise date of their arrival is unclear. The only available account of their migration and early years in India - the epic poem Qissa-i-Sanjan (Story of Sanjan) is vague so the year of arrival is estimated between the 8th and 10th century CE. (Image Above: Sanjan Stambh - the memorial column erected in 1917 to commemorate the arrival of Zoroastrians in India)

Zoroastrianism, or natively known as Mazdayasna is one of the world's oldest religions. Until the mid-7th century, Persia (modern-day Iran) was a politically independent state dominated by a Zoroastrian majority. Zoroastrianism was the official state religion for more than 1000 years till the Sassanian Empire. Then Arabs started the Islamic invasion.

The first Muslim Caliph Abu Bakr sent Khalid to conquer a part of Persian Empire. As there is no compulsion in Islam, before engaging the Sassanid forces Khalid wrote a letter to his opponents offering a choice:

Submit to Islam and be safe. Or agree to the payment of the Jizya (tax), and you and your people will be under our protection, else you will have only yourself to blame for the consequences, for I bring the men who desire death as ardently as you desire life.

Over the course of 16 years, thousands were slaughtered and hanged; ultimately, Persia was conquered and subsumed under the Umayyad Caliphate. When the Arab commander Sa'ad ibn Abi Waqqas conquered the Persian capital of Ctesiphon in province of KhvÃ¢rvarÃ¢n, he wrote to Caliph Umar ibn al-Khatta-b asking what should be done with the books at Ctesiphon. Umar wrote back:

"If the books contradict the Qur'an, they are blasphemous. On the other hand, if they are in agreement, they are not needed, as for us Qur'an is sufficient."

Once defeated, Persia became an Islamic state and the Sharia law came into effect. 'Dhimmi' status, originally offered only to the fellow monotheistsâthe Jews and the Christiansâprovided protection under certain conditions. Followers of other religions, unfortunately, had the choice of conversion or death, which later might be remitted to slavery. Due to their sheer numbers, Zoroastrians were given dhimmi status. Subsequently, however, when the population dwindled, they were reduced from dhimmi ('People of the Book') status to 'kafirs' (non-believers). Dhimma contract provided peaceful means to pursue dhimmis in accepting Islam. Jizya tax was levied on dhimmis as a condition for Jihad to cease. Failure to pay could result in the dhimmi facing alternatives of conversion, enslavement, death or imprisonment. Al-Zamakhshari, a Mu'tazili author of a commentary on the Qur'an, wrote:

"The Jizya shall be taken from them with belittlement and humiliation. The dhimmi shall come in person, walking not riding. When he pays, he shall stand, while the tax collector sits. The collector shall seize him by the scruff of the neck, shake him, and say "Pay the Jizya!" and when he pays it he shall be slapped on the nape of the neck."

Criminal law under Sharia discriminated blatantly: An oath of a dhimmi against a Muslim had no validity. This gave Muslims impunity against dhimmis, while helplessness and fear to dhimmis even against a wrong accusation. A dhimmi was punished, even in the case of legitimate self-defence, for raising hand against a Muslim; whereas a Muslim received only half the punishment for a crime if victim was a dhimmi.

The impact of Sharia on Zoroastrians began first in the cities. Not only high positions in public offices were reserved for Muslims, many lucrative trades and professions were dependent on state patronage. As the power and worldly-advantage lay with the followers of Islam, nobility and city-dwellers were the first to convert. Meanwhile, two specific laws targeted family ties: (i) under inheritance law, if any male member of a dhimmi family converted to Islam, he was entitled to all the inheritance. (ii) Muslim men were allowed to marry dhimmi girls or women, but dhimmi man marrying a Muslim woman was punishable by death. Ruptures from the familyâof men converted for inheritance by greed, and of girls kidnapped, converted and married off by forceâwere permanent since once converted to Islam, reverting was punishable by death. Such economic and social wounds proved fatal for numerous families. Islam was adopted by many, by threat and extortion, for political and economic reasons, or simply by persuasion.

Despite economic and social incentives to convert, Zoroastrianism remained strong in some regions, particularly in those furthest away from the Caliphate capital at Baghdad. In Bukhara (in present-day Uzbekistan), resistance to Islam required the 9th-century Arab commander Qutaiba to convert his province four times. The cities where Arab governors resided were particularly vulnerable to such pressures, and in these cases the Zoroastrians were left with no choice but to either conform or migrate to other regions.

Construction or restoration of non-Muslim place of worship was forbidden. Furthermore, there were many instances of destroying non-Muslim religious places, or converting them to mosques as a reprisal. For example, in the 9th century, a deeply venerated cypress tree in Khorasan (going by legend, planted by Zoroaster himself) was felled for the construction of a palace in Baghdad, 2000 miles away. Zoroastrian fire temples, with their four axial arch openings, were usually turned into mosques simply by setting a mihrab (prayer niche) on the place of the arch nearest to qibla (the direction of Mecca). Zoroastrian temples converted into mosques in such a manner could be found in Bukhara, as well as in and near Istakhr and other Persian cities. Another popular means to distress Zoroastrians was to maltreat dogs, as these animals are semi-sacred in Zoroastrianism. Such baiting, which was to continue down the centuries, was indulged in by all; not only by high officials, but by the general uneducated population as well.

In 18th and 19th centuries, Zoroastrians were regarded as outcast and untouchable. Water or food once touched by a Zoroastrian would turn impure and couldn't be consumed by a Muslim. They neither could wear new or white clothes, nor can ride a camel or a horse. Many foreign visitors to Iran of the time had commented on their pitiful situation. Prof. Edward G. Browne in his 'A Year Amongst The Persians' (the year being 1887-88) writes about an incident in 1860 where a Zoroastrian man of 70 years went to the bazaar in white trousers of rough canvas. According to Browne's account, "they (the Mussalmans) hit him about a good deal, took off his trousers and sent him home with them under his arms." In the 1850s, Comte de Gobineau, the French Ambassador to Iran wrote:

"Only 6000 of them are left and just a miracle may save them from extinction. These are the descendants of the people who one day ruled the world."

Maneckji Limji Hataria, an emissary of the "Persian Zoroastrian Amelioration Fund"âan organization founded in Bombayâwent to Iran in 1854. He found that the Zoroastrian population was reduced to less than 7,200 in all of Iran. At about the same time there were 110,544 Indian Zoroastrians in Bombay, about 20,000 in Surat and about another 15,000 elsewhere in India. He sent a report on condition of Zoroastrians in Persia:

"Dear Sir; This noble group has suffered in the hands of cruel and evil people so much that they are totally alien to knowledge and science. For them even black and white, and good and evil are equal. Their men have been forcefully doing menial works in the construction and as slaves receive no payment. As some evil and immoral men have been looking after their women and daughters, this sector of Zoroastrian community even during daytime stays indoor. Despite all the poverty, heavy taxes under the pretexts of land, space, pasture land; inheritance and religious tax (Jizya) are imposed on them. The local rulers have been cruel to them and have plundered their possessions. They have forced the men to do the menial construction work for them. Vagrants have kidnapped their women and daughters. Worse than all, community is disunited. Their only hope is the advent of future saviour (Shah Bahram Varjavand). Because of extreme misery, belief in the saviour is so strong that 35 years earlier when an astrologer forecasted the birth of the saviour, many men in his search left the town and were lost in the desert and never returned. ...I found the Zoroastrians to be exhausted and trampled, so much that even no one in this world can be more miserable than them."

In Yazd, Hataria established a Council of Zoroastrians, which succeeded in convincing a number of Iranian Zoroastrians to immigrate to India. These Zoroastrians who escaped to India mainly during the reign of the Qajar dynasty are known as the Iranis; whereas, the Parsees are those Zoroastrians of India who escaped Iran earlier after the Arab invasion. It is only in recent times that Parsis have become aware of the extent of the oppression that their ancestors in Iran had to endure. A 2004 estimate puts the Zoroastrian population in a range of 124,000 to 190,000, with roughly half of them in India (the Parsi and Irani groups).