Sampark for Samarthan is a unique, out of the box initiative to reach out to Masses 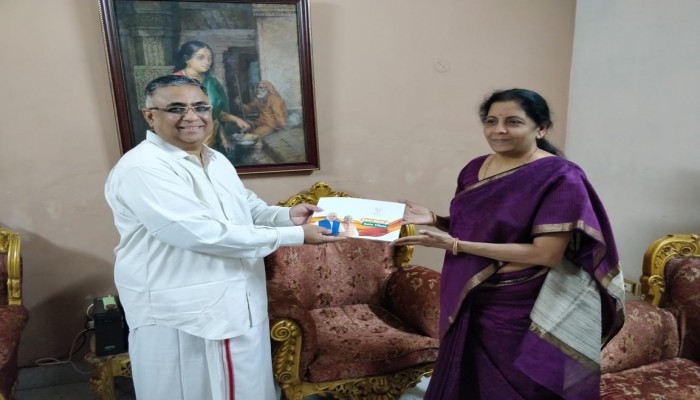 Recently, BJP President Mr. Amit Shah drove to former Army Chief General Dalbir Singh’s house, and later tweeted that he met him as part of a new initiative “Sampark for Samarthan”. A booklet listing the achievements of the Modi government in the past 4 years was presented to him. Shri Amit Shah later tweeted about his meetings with Kapil Dev, and then with Ratan Tata and Madhuri Dixit in Mumbai.

Controversial journalist Barkha Dutt wrote something to effect of why the former Army Chief should have refused to the BJP President. Since I am blocked by her and haven’t read any articles by her in recent times, I didn’t give much of an importance to her rant.

There was some outrage beginning on social media that Amit Shah is wasting time in meeting these people. Personally, I didn’t also follow this initiative much, until I saw Defense Minister Ms. Nirmala Seetharaman tweet about her meeting with Dr. S S Badrinath, Chairman, Sankara Nethralay as part of the #SamparkForSamarthan. It was then that I came to know that this is not some ordinary initiative, and the party is indeed serious about it. And only then did I get to know that BJP President did announce about this initiative that party leaders will go and meet 4000 eminent people from various fields and explain to them what this government has achieved.

Following the hashtag has been a very good learning experience for me – because I have come to know about some real achievers in various fields. Over the past ~20 days, the wider variety of achievers that the leaders of various hues in BJP have met is extremely impressive! Surgeons, Scientists, Academicians, sportspersons, industrialists, social workers, authors, former judges, journalists, former army men, former bureaucrats – #SamparkForSamarthan has shown us the importance the government (and the party) is giving to the unknown achievers of this country (Unknown to the media that is!).

For example, Shri Sambit Patra has been meeting doctors and surgeons in various hospitals to explain the achievement of 4 years  of the Modi government. Has anyone ever thought before of going and meeting doctors and surgeons and engage in a discussion with them on policy? Perhaps after politicians, doctors are the next group that interact with a wide variety of people every single day! Is this perhaps the first time that this group has been engaged at this level?

Meeting achievers is not the only unique part of this initiative – ministers and senior leaders are going to the achievers’ homes & offices, instead of the other way around! This is perhaps the first time that this sort of an engagement is happening, where politicians are visiting the houses of achievers to engage with them on policy. And that’s why this initiative is a very significant one in our political history too.

Take this example of Shri Ravi Shankar Prasad going and meeting the founder of Super30, Shri Anand Kumar. Whilst the opposition is still grappling with merely congratulating him, here we have a government who is going all out to engage him with policy. Or this example of Shri J.P.Nadda meeting PadmaShri Dr. Kshama Metre.

The unique things don’t stop here – the meetings are not restricted to those who have shown an inclination to the present government only! Achievers, irrespective of their political inclinations, are being met. For example, musician Vishal Dadlani’s views on the BJP are quite well known – yet an attempt is being made to meet with such folks and explain the achievements.

The initiative is not restricted to New Delhi alone. Nor is it restricted to just the metros! We already have seen many tweets on meetings that range from bank managers in rural areas to sportspersons in the Northeast to heads of various religious institutions (In the true secular spirit and like the warped spirit of the opposition!).

It was also heartening to see senior leaders reach out to sports achievers ranging from Kapil Dev to Milkha Singh to Gopichand to VVS Laxman to Ms. Nishita Chakraborty – the engagement with the sport community has never been this stronger before I believer.

The list of people is obviously very long and one can go on and on detailing them, but following the #SamparkForSamarthan hashtag will give a peep into the various unknown achievers of India. Initiatives like this also expose the limited world view of the English media and perhaps the perennial outragers on the social media. While they remain fixated with just a couple of meetings with people they don’t like, they simply are missing the ground level connect the #SamparkForSamarthan initiative is making!

PS: The information in this booklet can be found on this detailed and user friendly website – www.48months.mygov.in