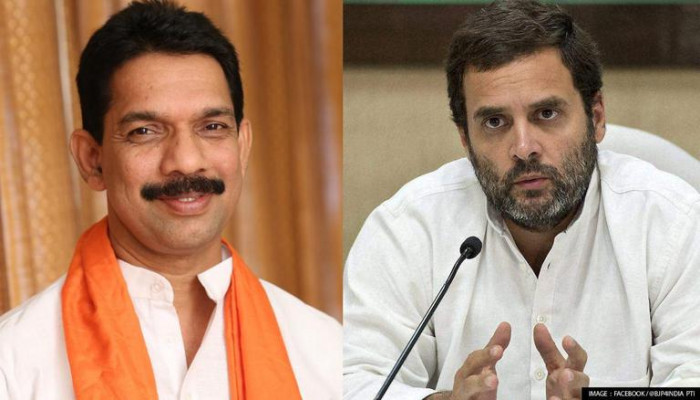 Karnataka BJP state president Nalin Kumar Kateel on Tuesday stoked a controversy after he referred to Congress leader Rahul Gandhi as a drug peddler and an addict.

"Who is Rahul Gandhi? I am not saying it. Rahul Gandhi is a drug addict and drug peddler. It had come in media. You can't even run the party," he said.

Nalin Kumar was referring to a 2001 news report which claimed that then Congress Vice President Rahul Gandhi was caught by Federal Bureau of Investigation officials in the United States for holding $1.60 lakh and "white powder". A prominent newspaper dated September 30, 2001, stated that Gandhi was temporarily detained at the Boston Airport for possession of drugs but they did not state that he was arrested.

Kateel's remarks came after a tweet in Kannada, terming Prime Minister Narendra Modi as an illiterate, from Karnataka Congress flared a political row. DK Shiva Kumar later announced that the controversial tweet on PM Modi has been removed by the party's social media team.

Earlier in a tweet, the official handle of Karnataka Congress used the phrase ‘angootha chhaap’ to insinuate that PM Modi is an illiterate.

The Opposition party wrote in Kannada, “Congress built schools but Modi never went to study. Congress even set up schemes for adults to learn, Modi didn't learn there too. Even though begging is prohibited, people who are lazy have made the country’s people beggars. The country is suffering because of #angoothachhaapmodi.”

“I have always believed that civil and parliamentary language is a non-negotiable pre-requisite for political discourse. An uncivil tweet made by a novice social media manager through the Karnataka Congress official Twitter handle is regretted and stands withdrawn,” Shiva Kumar had tweeted.

Questioning Congress' morality, Nalin Kumar stated that several prominent leaders of the grand old party, including its interim President Sonia Gandhi, are out on bail.