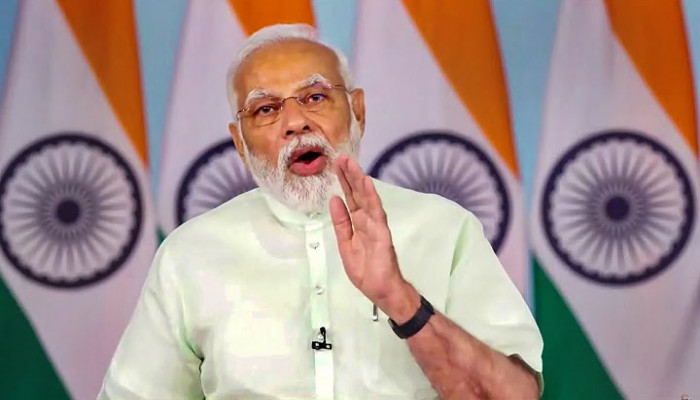 The Prime Minister greeted the people on the occasion of World Biofuel Day. Terming the Ethanol Plant just a beginning he said that this plant will reduce pollution in Delhi, Haryana and NCR. He also congratulated Haryana for the splendid performance by the daughters and sons of Haryana in CWG 2022.

The Prime Minister said that in a country like ours that worships nature, biofuel is a synonym for protecting nature. Our farmer brothers and sisters understand this better. Biofuel for us means green fuel, environment-saving fuel. He said that with the establishment of this modern plant, farmers of Haryana, where Rice and wheat are grown in abundance, will get another lucrative means of using crop residue.

The bio-fuel plant of Panipat will also be able to dispose of the stubble without burning it. The Prime Minister remarked that it will lead to many benefits. The first advantage would be that mother earth would be freed from the pain that was caused by burning stubble.

The second advantage would be that the new systems for stubble cutting and its disposal, new facilities for transportation and new biofuel plants will bring new employment opportunities to all these villages.

The third advantage would be that the stubble which was a burden for the farmers and a cause of concern, would become a means of additional income for them.

The fourth advantage will be that pollution will be reduced, and the contribution of farmers in protecting the environment will increase further. And the fifth benefit will be that the country will also get an alternative fuel. The Prime Minister expressed happiness that such plants are coming up in various areas of the country.

The Prime Minister said that people who have a tendency to avoid problems by adopting shortcuts for political selfishness can never solve the problems permanently. Those adopting short-cuts may get applause for some time and may gain political advantage, but that does not solve the problem. Adopting a shortcut will definitely result in a short-circuit. Instead of following short-cuts, our government is engaged in permanent solutions to the problems. A lot has been said about the problems of stubble over the years. But those with a short-cut mentality could not solve it, he said.

The Prime Minister listed steps that aim to solve the problem in a comprehensive manner. Farmers Producer Organisations (FPO) were given financial support for ‘parali’, up to 80 percent subsidy on modern machinery for crop residue, and now this modern plant will help in providing a permanent solution to this problem, he said. “Farmers who were given a bad name due to compulsions of parali burning will now feel the pride of contributing to the production of bio-fuel and nation building”. The Prime Minister also mentioned Gobardhan Yojana as an alternative means of income for farmers.

Continuing with the permanent and lasting solutions to the problems of the country the Prime Minister also talked about new fertiliser plants, nano fertilisers, and new missions for edible oil.

The Prime Minister pointed out that due to the mixing of ethanol in petrol, in the last 7-8 years, about 50 thousand crore rupees of the country have been saved from going abroad. And about the same amount has gone to the farmers of our country because of ethanol blending. He said till 8 years ago only 40 crore-litre ethanol was produced in the country; now this production is about 400 crore litres.

The Prime Minister also pointed out that CNG stations increased to more than 4.5 thousand from mere 800 eight years ago. Gas is reaching through pipes to more than a crore households. “Today, when we are completing 75 years of independence, the country is also working on the goal that in the next few years, more than 75 percent of the households in the country will get piped gas '', he said.

Modi said that if there is selfishness in politics, then anyone can come and announce to give free petrol and diesel. Such steps will take away the rights of our children, and prevent the country from becoming self-reliant. Due to such selfish policies, the burden on honest taxpayers of the country will also increase, the PM remarked. To deal with the challenges that the country is facing, it needs clear intentions and commitment. It requires extreme hard work, policy and huge investments, he added.

The Prime Minister said if the government does not have money, even the plants like ethanol, biogas and solar plants will also close down. “We have to remember that even though we will not be there, but this nation will always be there, the children living in it will always be there. Those who sacrificed their lives for freedom have also worked with this eternal spirit….. As a country, we have to take a pledge that we will not allow such tendencies to grow. This is a collective responsibility of the country”, he stressed.

The Prime Minister said that during the Amrit Mahotsav when the entire country is painted in the colour of the Tricolour, he would like to draw the attention of the country to something that has happened. An attempt has been made to defame this holy occasion, to humiliate our brave freedom fighters. It is important to understand the mentality of such people.

He said that there are some people in our country too who are trapped in the vortex of negativity, immersed in despair. Even after lying against the government, the public is not ready to trust such people. In such desperation, these people are also seen turning towards black magic.

The PM further highlighted the events of 5th August when there was an attempt to spread black magic mentality. The Prime Minister concluded by saying that those who think that by wearing black clothes, their period of despair will end are unaware that irrespective of the black magic and their belief in superstition, the public's trust will never be restored in them.”