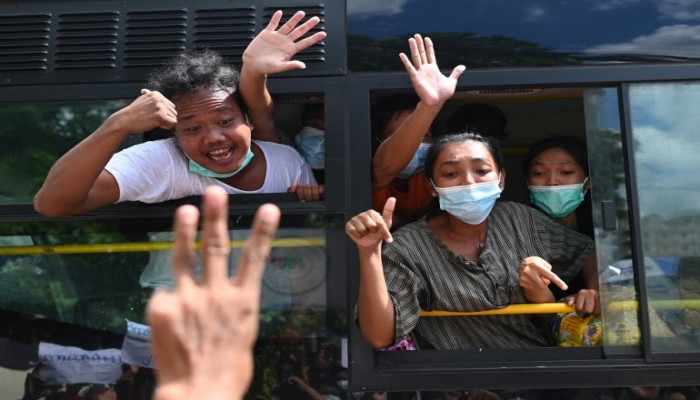 Hundreds of Myanmar political prisoners, including Aung San Suu Kyi's party spokesman have been freed from Insein prison, according to Myanmar’s local media.

The announcement was made after Min Aung Hlaing, the army chief who seized power in a coup in February plunging the country into political turmoil addresses the nation.

Earlier, Association of Southeast Asian Nations (ASEAN) decided that Min Aung Hlaing would not be invited to their summit later this month because the military had made "insufficient progress" in complying with a five-point consensus that was agreed jointly in April.

The Assistance Association for Political Prisoners (AAPP), a rights group that has been tracking the military's response to the protests that broke out as a result of the coup, says more than 9,000 people have been jailed and more than 1,000 killed.

Most of the protesters were arrested during a brutal crackdown this year as millions of people took to the streets and staged a national strike.

In April, the leaders met to discuss the coup and invited General Min Aung Hlaing, seemingly recognizing him as Myanmar’s leader. They agreed on a five-point plan calling on the regime to end the violence immediately and subsequently appointed an envoy the Brunei diplomat Erywan Yusof who was expected to visit Myanmar.

But Myanmar has refused to let him meet with  Aung San Suu Kyi, who is under arrest and faces trial on numerous criminal charges, and the envoy has yet to visit the country.