Mount Bromo and its Indian Connection 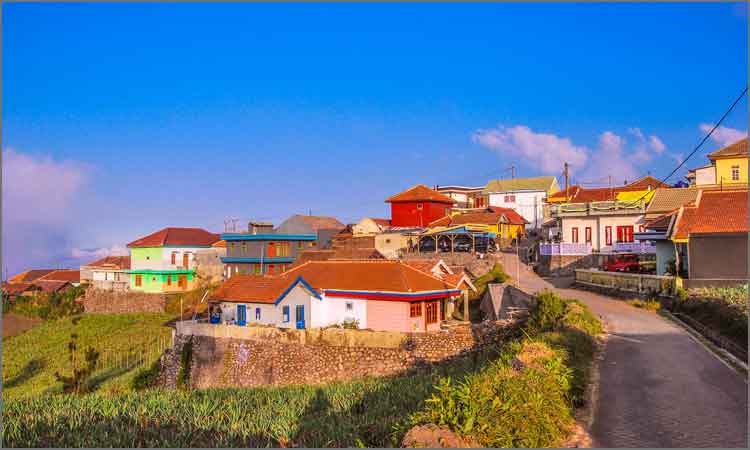 Mount Bromo (meaning Brahma in Javanese, the Indian God) is one of the many volcanoes located in Eastern Java, Indonesia. It is an active volcano and along with a vast plain called Sea of the Sands (Javanese call it as Segara Wedi or Lautan Pasir in Indonesian Bahasa) is part of Bromo Tengger Semeru national park. It provides one with a spectacular view matched by only a few other natural spectacles around the world. But many, especially Indians, would be surprised to know that the region has its Indian connection, where about 300,000 people practice Hindu religion. These ethnic people are called Tenggerese, who practice the form of religion similar to the Balinese Hinduism.

I had traveled to Indonesia in May of 2015 along with my wife. After visiting Central Java, another region which was an epitome of Indian culture prevailing in these regions between 8th and 15th century AD, I traveled to Eastern Java. I went to the village of Cemoro Lawang after a tedious trip across a mountainous road from Probolinggo, a small town between Surabaya and Bangyuwangi, the port city at the eastern end of the Java island. Cemoro Lawang is at a height of 2000 meters altitude in the mountains and is a small hamlet at the entrance of the Bromo Tengger Semeru National Park which has the Mount Bromo volcano. The access to Mount Bromo is through the village of Cemoro Lawang.

I got an accommodation with one of the local Tenggerese families and that is when it dawned on me the similarities between a typical Indian village and this Tenger village. One look at the walls and I realized the framed pictures of Gods are similar to the pictures one would see in Indian houses. 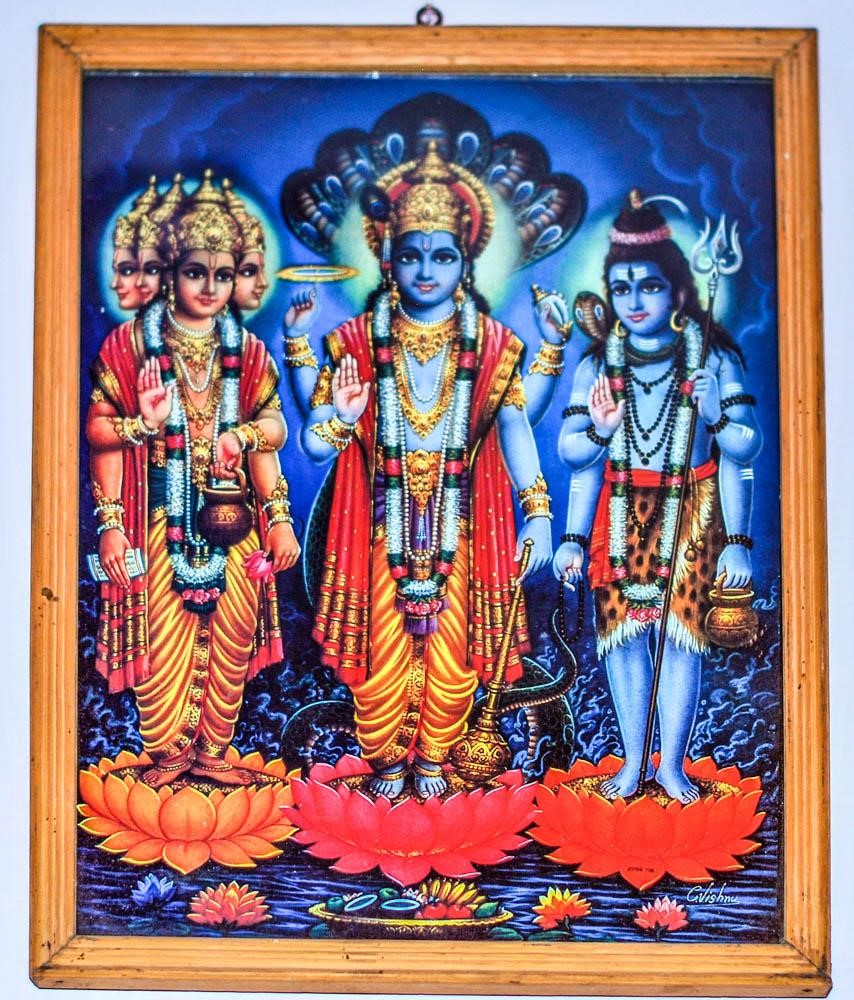 Picture of Trimurthys on the wall

People had placed pumpkin flowers with other offerings to Gods in front of their houses. It reminded me of my childhood in Tamilnadu, India when in the months of December and January, one would see, in front of most houses, colorful Kolams(Rangolis) with Pumpkin flowers. 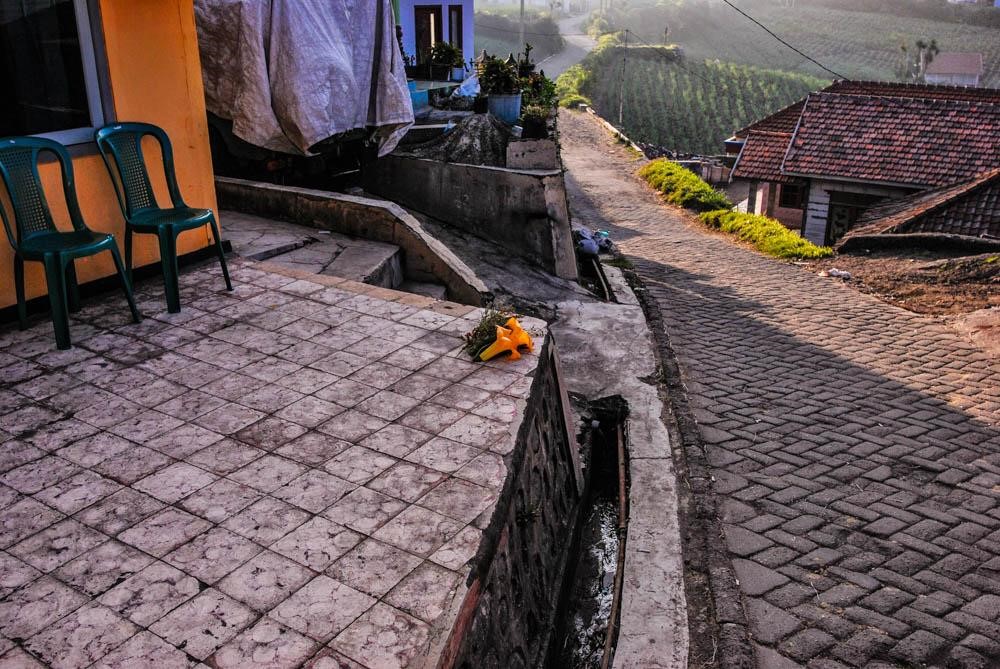 Tenggerese pray to the supreme God of Hinduism in these parts of the world called Ida Sung Hyang Widi Wasa. But do understand that Widi Wasa is none but Brahman (meaning ultimate reality quoted in the Vedas). All the other gods including the Trimurthys, Siva, Vishnu and Brahma, are all believed to be the manifestation of the God Widi Wasa as per the belief of Indonesian Hindus. The emphasis on the supreme god happened in the 1950s due to the Indonesiaâs religious policies which recognizes only monotheism but wanted people to identify themselves to one of the 6 recognized religions.  Also these people pray to their ancestors which is similar to the village deity worship prevalent in different parts of India. Tenggerese themselves are the people who migrated from Central Java with the royals after the Hindu Majapahit empire was defeated by Islamic forces in the 15th century.

The life is very slow here and the village settles down by sunset. After having my dinner in a small eatery/grocery joint, I went to bed early for a good nightâs sleep after my day long journey from Yogyakarta (complete details covered in âHow to Get Thereâ Section below).

Mount Bromo along with the Sea of the Sands is a designated national park, Bromo Tengger Semeru National Park, since 1919. So one would have to pay the entrance fees to the park (roughly 350000 rupiah or 30 USD).  You need to trek 5 miles through a vast plain called sea of the sands (Javanese call it as Segara Wedi or Lautan Pasir in Indonesian Bahasa). The Sea of the Sands itself will present one with the experience of walking on the surface of the moon due to the blackish volcanic soil. And finally hike about 150 meters to the top of the crater of the Mount Bromo. Alternatively, as I did, take a jeep tour which includes the visit to the Mount Penanjagan for a sunrise view of Mount Bromo and followed by a trip to the foot of Mount Bromo. A few rent motorcycles with drivers. Do take a winter jacket as the temperatures will fall to 0 C early morning.

Early Morning, the host of the family I was staying with, woke us up and got us into the Jeep which was supposed to take us to Mount Penanjagan. There were almost hundred jeeps, which took the backpackers, like a royal parade moving at 20 miles per hour. And it stopped almost a mile before the point at Mount Penanjagan where one would see the sunrise of Mount Bromo and other volcanoes, Mount Semeru and Mount Batok nearby. I came across backpackers from different countries jostling for space at the vantage point at Mount Penanjagan. And in a few minutes, the stunning experience unfolded with the sun rays emerging from the horizon. The sun rays combined with the early morning fog prevalent at that altitude along with the greenish hue of the mountains and the darkish sea of sands provides one with the magic, which is out of this world. Once I was done with the sunrise, I walked to my jeep tired but with my spirits high. 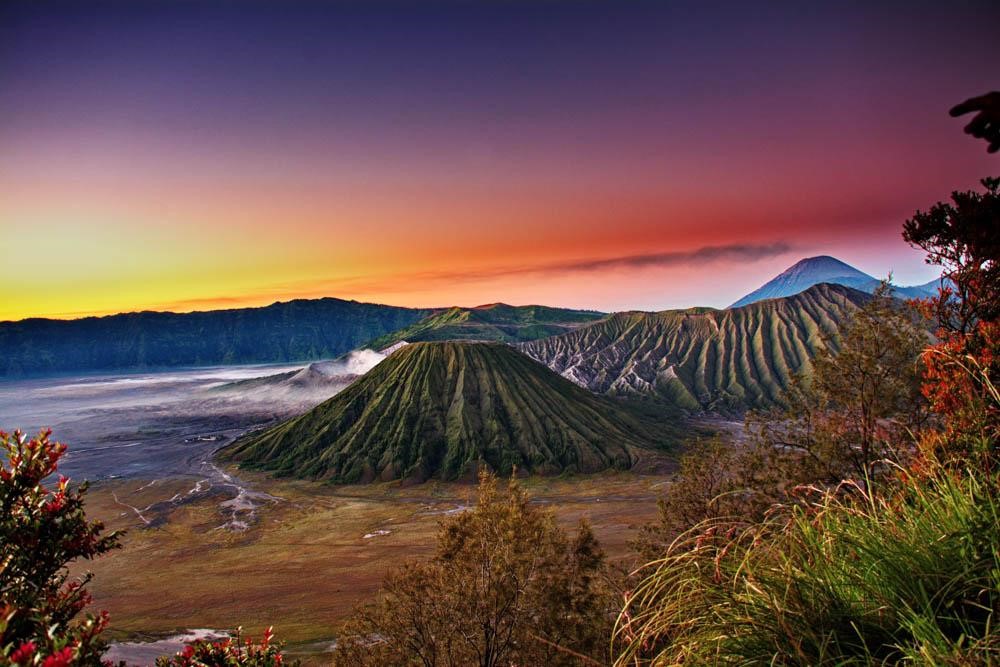 The next stop is the Sea of the Sands and the Mount Bromo itself with the miles and miles of black volcanic soil called Sea of Sands. The jeeps stopped a mile before the Mount Bromo Volcano crater. As I started walking, I could see a structure which was not visible from the distance. As I started getting closer, I realized it was Pura Luhur Poten (based on my homework), a Hindu temple dedicated to Lord Brahma. It had blended nicely with the background as it was constructed with the black stones from nearby volcanoes. 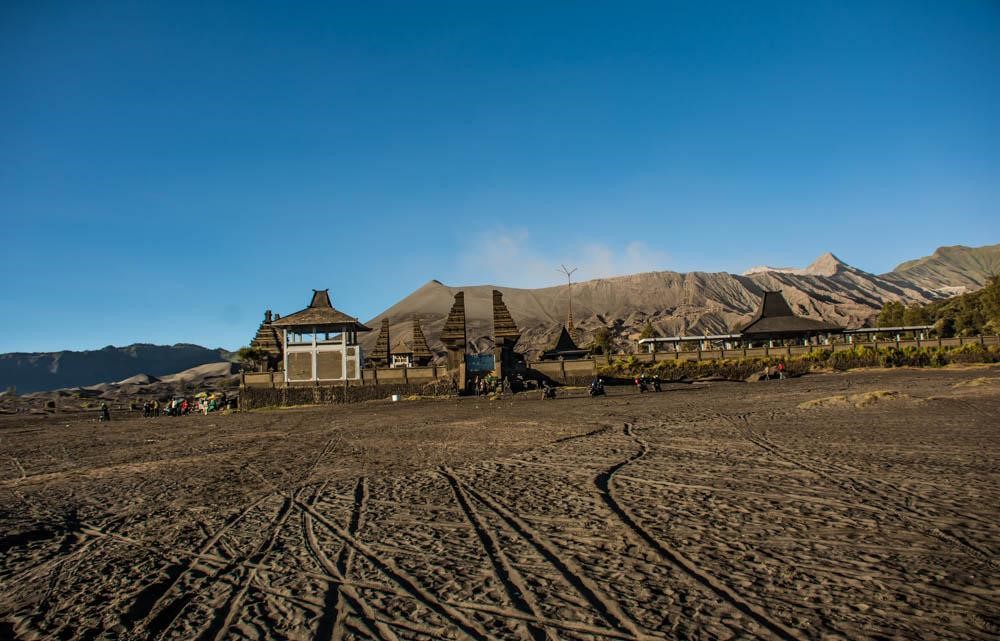 Pura Luhur Poten from a distance 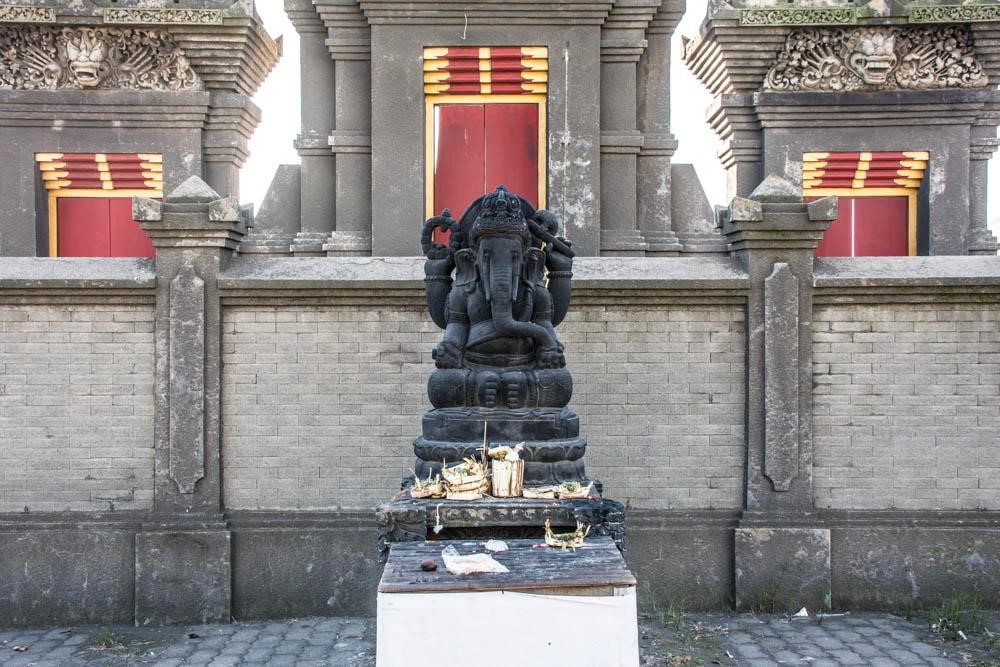 Lord Ganesh inside the temple

I walked inside in reverence and was greeted by a statue of Lord Ganesha. Inside, there were the 3 Murthys depicted in 3 structures similar to the Pelinggih(Meru) in Balinese temples. I was filled with a spiritual satisfaction and calmness in spite of the blazing sun and the air filled with dust rising from the soil due to the jeeps plying around. 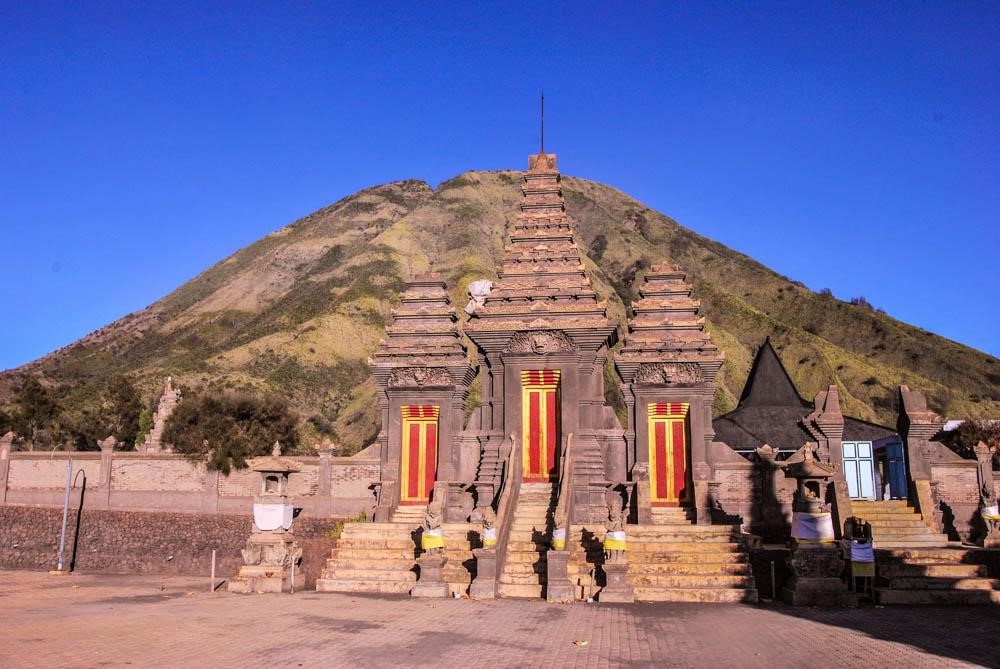 Trimurthys represented in a Pelinggih like structure. In the background is Mount Batok

I walked towards Mount Bromo volcano and started hiking the 150 meters to the top of the crater. The 150 metersâ hike felt like the most tedious one as I was tired by then due to the mid morning hot sun sapping up my energy and my spirits. 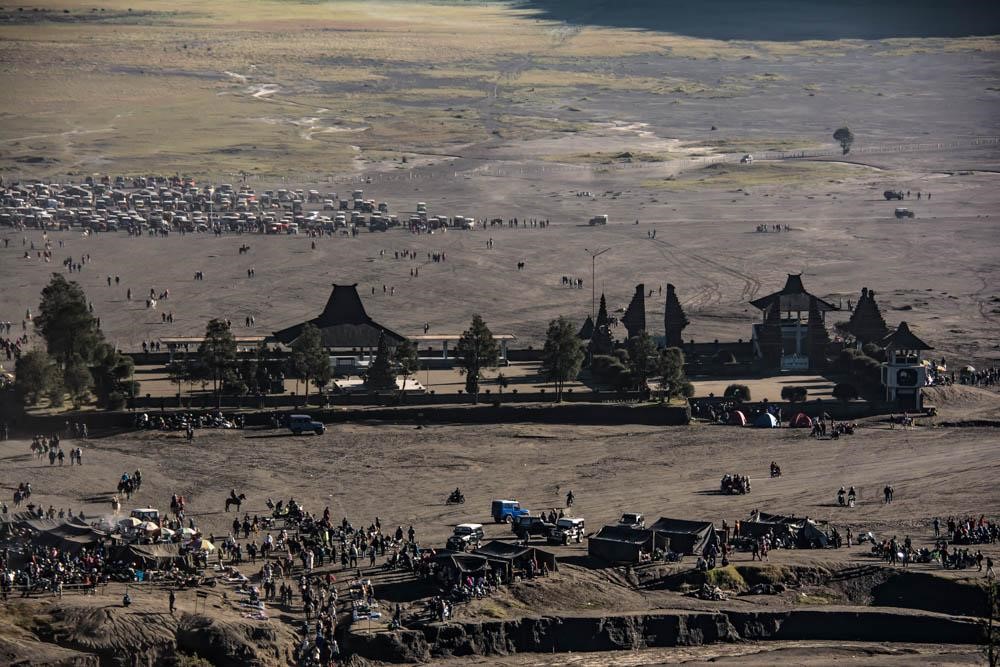 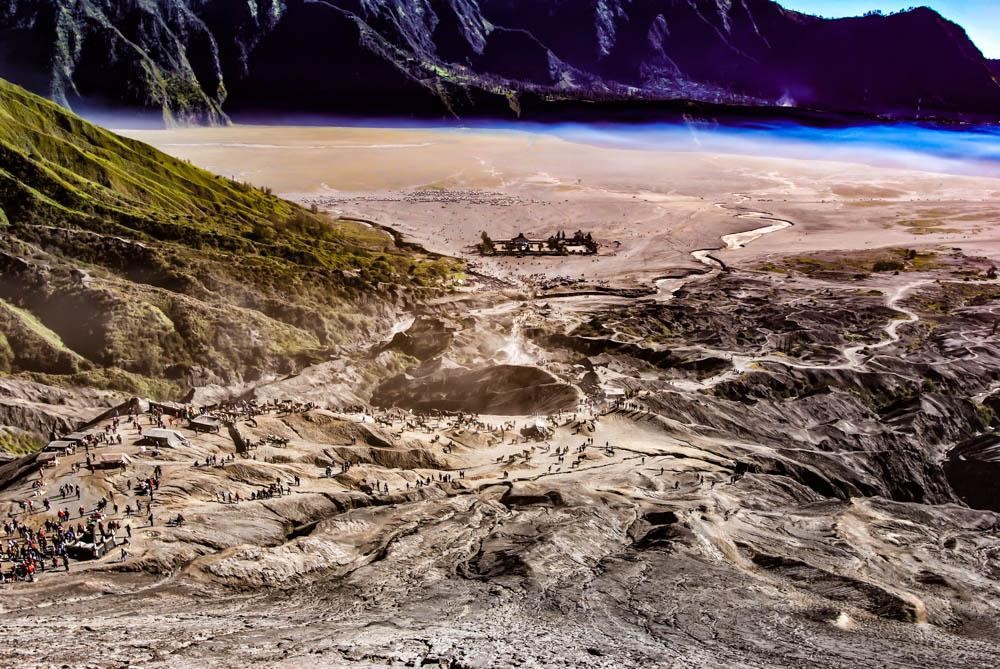 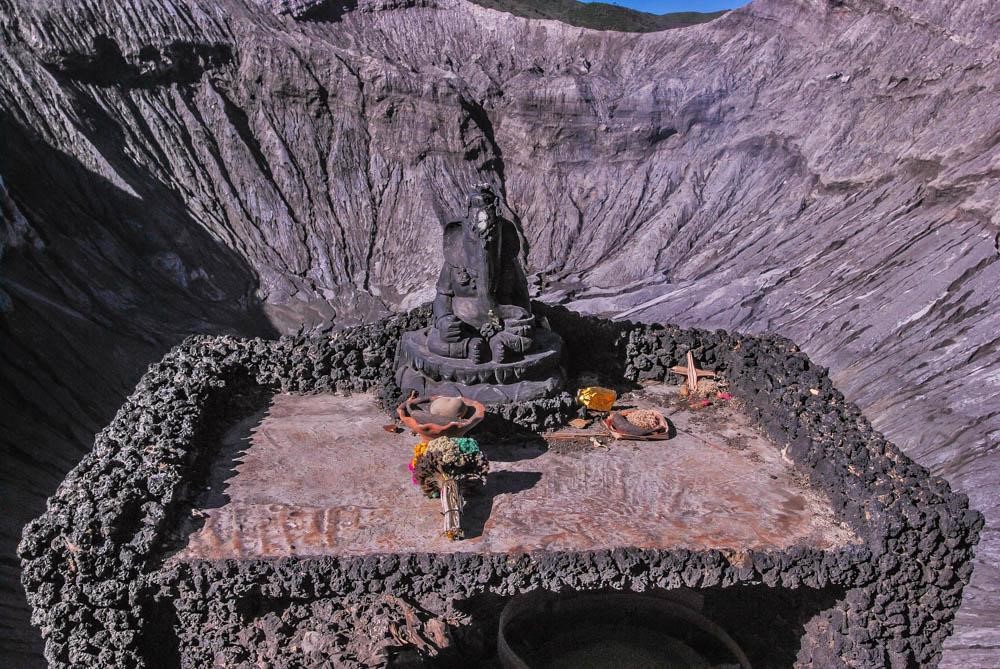 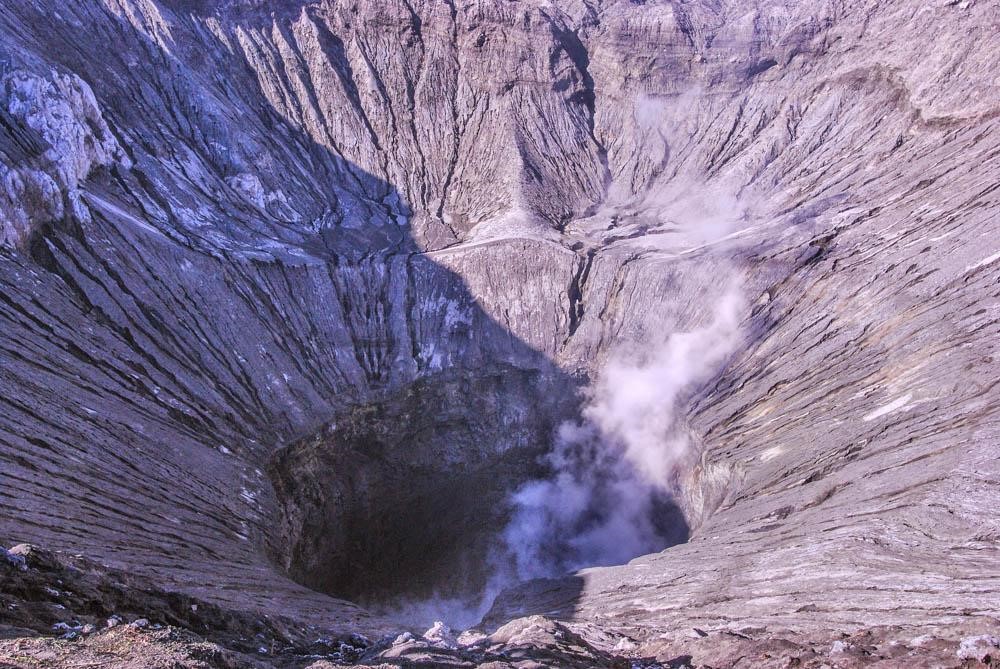 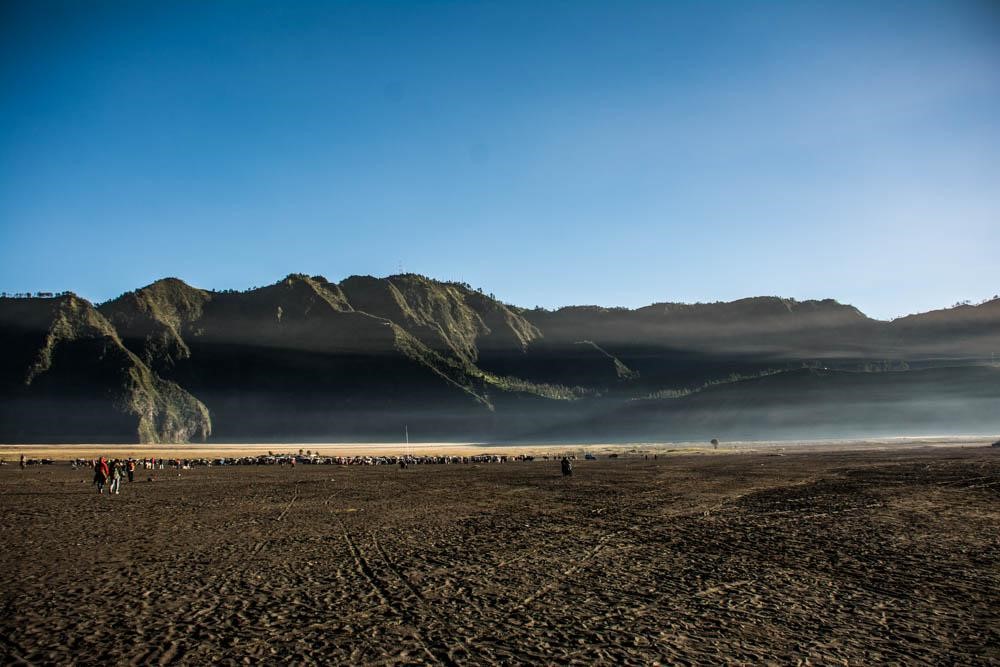 Inside the Sea of the Sands

Once I reached the top, to my surprise, I was welcomed by another Lord Ganesh statue and had offerings in front of him, which suggested that people were praying to him. When I asked around, one of the locals mentioned that he protects the people from the simmering volcano (do note that these are active volcanoes with the smoke smoldering all the time). A peep into the caldera suggested offerings done by the Tenggerese. It has been the practice of the Tenggerese to pray to Supreme lord, Widi Wasa in the temple, Pura Luhur Poten, on the 14th day of the Kesada (the 12th month of the Tenggerese calendar) and climb up the Mount Bromo and throw the sacrificial materials which includes fruits and animals such as goats into the caldera. In order to understand the background, one need to understand the folklore below. By now I was tired and exhausted but thoroughly satisfied, I came back to the jeep, which dropped me back in the village.

The temple itself is tied to the folklore of Roro Anteng and Joko Seger. The last king of Hindu Majapahit kingdom, Brawijaya had a daughter, Roro Anteng who was married to a Brahmin, Joko Seger. After the defeat of the king at the hands of the Islamic forces, the Hindus along with Roro Anteng and Joko Seger, retreated to the eastern Java and settled around Mount Bromo. Joko Seger became the king of the Tenggerese, the Hindus who came along with the prince and the princess. The kingdom became prosperous under his rule but the King and the Queen did not have any children. The King and the Queen climbed up to the caldera and prayed to the universal God, Widi Wasa, who through the echo in the sky promised them children and asked them to sacrifice the 25th child born to them. The Queen had 25 children as per the blessings of Widi Wasa and the 25th child, Kesuma, was thrown into the caldera as a sacrifice to the God as promised.

How to get there?

If one is flying, they need to fly to Surabaya International airport or Malang airport. I preferred Surabaya as the price was cheaper flying out of Yogyakarta costing me around $35 one way. At Surabaya airport, take Damri bus outside the airport terminal and go to Purabaya bus terminal which is a 20 min ride. At Purabaya bus terminal take the bus going to Banyuwangi. It costs around 30000 rupiahs per person from Purabaya bus terminal to Probolinggo and takes about 2 hours 30 minutes to reach there. The bus was comfortable and provided an opportunity to see the Indonesian countryside. Warning: ask the bus conductor to drop you at the Probolinggo bus terminal. If only the tourists are being asked to get down at Probolinggo and the locals are not getting down, then that is not the terminal but a location of a private tour operator who is in cahoots with the bus operators to fool you into an expensive tour package of Mount Bromo & Ijen volcano. Even if you made the mistake of getting down at the tour operatorâs place, do not worry, you can get a minivan paying 2000 rupiah to the bus terminal. Outside the bus terminal, there are minivans going to Cemoro Lawang, the village at the entrance of the Mount Bromo. It is on a share basis accommodating 10 people and will charge about 25000 rupiahs per person. Do note that they will wait even for an hour or more for the entire van to fill up. I paid for 5 additional passengersâ fare as I lost patience waiting.

How to get out?

There are mini vans which waits for the passengers in the main street of Cemoro Lawang village taking one back to Probolinggo bus terminal in a 45 min journey and will cost you 25000 rupiahs per person. Once at the Probolinggo bus terminal, one will get the bus back to Purabaya bus terminal (in Surabaya) or Malang. In the terminal, you will get the Damri bus back to the Surabaya airport (you can ask anyone and they will guide you to the location of the Damri buses)

The best option and inexpensive one is to look for homestays in Cemoro Lawang and do not go by what the touts in Probolinggo say (including the van operators) about the limited accommodations. You can get one once you reach the village. It would cost you about $15 USD roughly per room. Do check the room before you book. And the people in the village are friendly and caring as experienced by me. So you would not have issues finding a room.

Take a breathing mask even if you do not have breathing problems as your nose and inside will be totally filled with the dust rising from the volcanic soil due to the Jeeps and the people walking.

There are no ATMs in the village. Make it a point to carry cash with you. 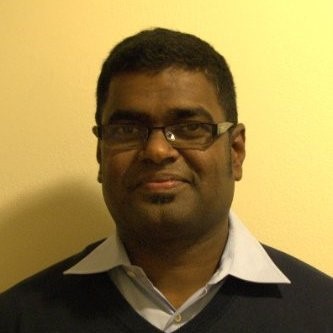