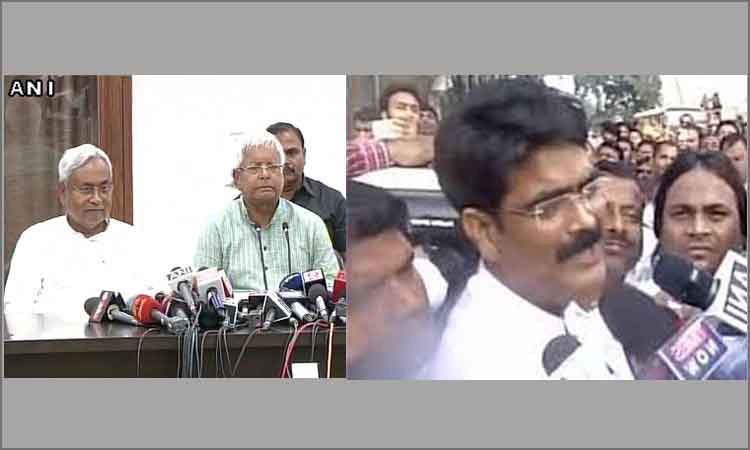 It was a sorrowful and a politically significant event in the context of Bihar politics. The release was followed by the tumultuous welcome by a throng of his supporters, a cavalcade comprising at least 400 SUVs and his swagger in the midst that cocks a snook at the status of the rule of law in Bihar.

Shahabuddin continues to be part of the RJD's top policy-making body even though he was in jail all these years. Obviously, the question does not arise of RJD distancing from the Siwan strongman. It was clearly visible with RJD MP from Bhagalpur, Shailesh Kumar alias Bulo Mandal lining up outside the jail to receive him among Shahabu Miyan's supporters and other RJD workers.

Not only that, two absconding shooters Mohammad Kaif alias Bunty and Mohd. Javed wanted for the murder of Siwan journalist Rajdeo Ranjan walking alongside the RJD strongman were also seen. These absconders were also seen with Lalu's son on many occasions.

The Siwan Superintendent of Police responded saying: "we have taken notice of photographs of the suspect and will serve notice and question Shahabuddin in connection with the absconding suspects being part of his cavalcade." What a joke!

Just five km away from Pratappur, the village of Mohd. Shahabuddin, the 70-year-old Chandrakeshwar Prasad (whose three young sons of were murdered by Shahabuddin's henchmen) regrets that the bail order "is nothing less than my death sentence." This time, Shahabuddin is out on bail in the murder of Rajiv Roshan, Chandrakeshwar Prasad's eldest son. Roshan was an eyewitness to the killing of his two brothers, Girish and Satish, who were kidnapped in 2004 and killed by pouring acid at Pratappur. Rajiv had somehow escaped, but on his return to Siwan in 2014, he too was murdered in front of his father.

However, Shahabu Miyan dismisses the charges saying: "if I'm a terror, why are so many from all across society converging here (his village home wherein 2001, he had an eight-hour encounter with Bihar police in which seven people were killed) in a festive atmosphere?" He has a point. The fault is of the people of Bihar and their choice of leaders.

Asha Ranjan (wife of Journalist Rajdeo Ranjan who was killed in a busy marketplace in Siwan on May 20) was also seen crying seeking a CBI probe into the case saying: "I believe the local administration is under political pressure, and that is why the culprit is roaming around free."

Earlier an MLA from RJD, from 1996, Shahabuddin went on to become a parliamentarian four times, in which his 2004 Lok Sabha contest was from jail. In all, Shahabuddin faces around 40 criminal cases, out of which, judgment has come in 12 cases. He was acquitted in four of them, while he has almost completed his sentence in eight cases. While in some cases the trial is yet to complete, Shahabuddin has been convicted in 10 other cases. In August 2007, Shahabuddin was convicted of attacking Siwan SP Sanjiv Kumar Singhal. He faces a term of 10 years in the case.

Shahabuddin is the synonym of terror in Bihar. Among many charges, he was accused of the murder of the then JNU student union president Chandrashekhar in 1997 for the latter's audacity to campaign for CPI(ML)'s candidate against him in Siwan. Now see the irony of the two pictures below:

In May 2007, Shahabuddin was convicted of kidnapping a far-Left activist Chhote Lal Gupta and sentenced to life incarceration, which jeopardized his political career, and the law barred him from contesting polls.

His imprisonment and subsequent conviction symbolized Nitish's attempt to end the Lalu-Rabri âJungle-raj'. This time, his release follows the alliance between Lalu and Nitish.

In February 2016, the Patna High Court had directed the state government to complete the trial in the acid bath case, which never took off. It is a clear indication that it was a Mahagathbandhan deal, and the state government worked systematically in facilitating the release of Shahabuddin.

Taking advantage of the media attention, Shahabuddin made it further clear that Lalu Prasad is his leader. But what caught mediaâs attention was when the dreaded goon immediately took a dig at CM Nitish Kumar by describing him as "paristhitiyon ke mukhyamantri (accidental CM due to circumstances)." Shahabuddin's unambiguous prognosis on Nitish Kumar is spot on.

Now contrast Shahabuddin's release, with the time in Bihar (after the 2005 Assembly elections), when various cases were reopened, and Shahabuddin was sent to jail after Nitish assumed power. Shahabuddin was one of the many politicians with criminal records who were sent behind bars during the first stint of Nitish's rule.

But in perception, Nitish's first mandate was clearly larger than the mere resurrection of the state and he derived his strength more from his moral positioning than his political engineering and perceived to be a man of impeccable credentials.

Unfortunately, in his second stint, Nitish fell victim to his own hubris. His relationship with BJP got strained as he made his intentions clear of breaking the alliance following the projection of Narendra Modi as BJP's prime ministerial candidate for the 2014 General elections. Of course, much of this came from nursing his larger than life political ambition to put himself up as a counter to Modi's emergence on the national level.

JD(U)'s parting ways with the BJP and drubbing in the 2014 LS election apparently disoriented his politics, and he started losing his moral position as well. Choosing a lightweight Jitan Ram Manjhi as his successor after losing the 2014 polls to avoid any threat was a clear indication. But the script went haywire, and Manjhi proved to be another opportunist. Though Nitish quelled Manjhi's revolt, his political journey since 2010 has lost substantial moral ground.

Sankarshan Thakur in his book Single Man: The Life and Times of Nitish Kumar of Bihar, defines Nitish so aptly in one sentence: "Nitish came across as a usual shrewd politician ready to acquire power by "hook or by crook."

But Nitish's sheer opportunism came to light when he buried the hatchet with Lalu Yadav and forged a grand coalition (Mahagathbandhan) along with the Congress to defeat BJP in 2015. The author wrote an article much before the 2015 Bihar assembly elections here â "Nitish Kumar: The Road To Political Death," predicting that this âMahagathbandhan' will result in the revival of Lalu Yadav and Nitish, having dug his own grave, is walking towards his political death.

If one is following the recent lawlessness in Bihar, in which a boy was shot dead for overtaking by dreaded goon and JDU MLC's son in broad daylight, then murder of the Journalist in Siwan and now the spectacle of Shahabuddin's cavalcade breezing past Patna, has robbed Nitish Kumar of even the fig leaf of morality that he tries to retain.

Nitish's meekness in the release of Shahabuddin is more persuasive than his fierce resistance to stop Modi from campaigning earlier in Bihar, and Nitish's behavior also spells his discomfort.

The first major reflection of strain within the âMahagathbandhan' was visible when prominent RJD leader Raghubansh Prasad Singh backed Shahabuddin's comment indicating the strength and numbers. JD (U) strongly reacted against the comments, and the party also appealed to Lalu Prasad to enforce the code of âcoalition principles' among his party men.

However, Nitish also came out responding to Shahabuddin's comments saying: "I am here because I got the mandate. You all (media) are wasting your space and time. The entire world knows what is the mandate of the people of Bihar. So, we will go according to the mandate of the public or should we pay attention to what others are saying? I never cared about such issues."

In a course correction and to save Nitish's face, JDU's spokesperson Dr. Ajay Alok confirmed that Bihar government would appeal against Shahabuddin's bail in the Supreme Court.

It is a catch 22 situation for Nitish Kumar, and I can try guessing his next move, considering he is a shrewd opportunist. But every time I try, Nitish defeats me with a new low.