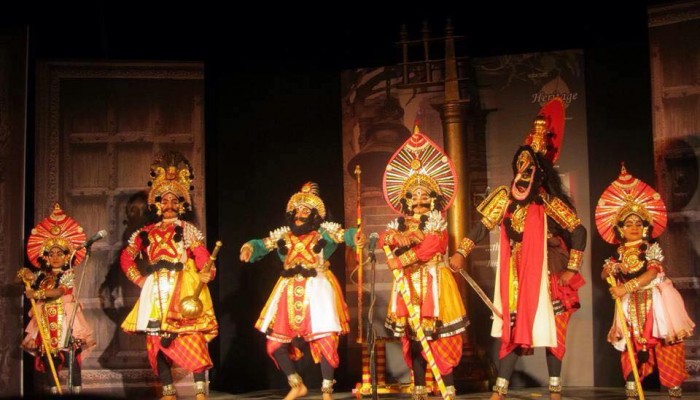 In ancient India, temples played a pivotal role in nurturing and growth of the economy, culture and knowledge. Temples were the place where debates on Shastras took place. Temples were the place where divinity and grace came to life through the beautiful Temple Architecture. The temple carvings brought art, devotion and culture close to the common man. This was a common feature nearly in all South Indian temples until the British rule clamped down on the cultural festivals and the intellectual debates. The platforms for evolution of culture and knowledge was broken down during the British rule and subsequently post-independence we have only heard & read of our Temple culture but have not taken ownership of our Temples. Despite the increased mobility, access to information and globalization and apparent progress we have become insensitive to our history and suffer from a severe loss of identity.

Amidst all this, Bangalore based Smt Vijayalakshmi Vijayakumar decided to take the bull by the horns and is working to bring the Temples alive again. She believes that one of the best paths to sensitizing people to country, culture and community is through the performing arts especially the traditional arts, where the content is spiritual and peace giving. Smt. Vijayalakshmi is a graduate in Literature, Psychology and Economics and is also a renowned dancer. Her passion is the study of Indian Heritage and culture and designing programs and workshops that are a meeting point of our heritage and contemporary life. She believes in nurturing and encouraging a life-style that is in sync with nature and environment and what is rich in tradition.

Smt. Vijayalakshmi along with few others formed a trust “Heritage Trust” a not-for-profit charitable registered trust, in 1994, for the promotion, preservation and dissemination of our heritage and culture through seminars, workshops and cultural festivals to bring us closer to our roots.

Since 2010, Heritage has been conducting thematic festivals: “Gudiya Sambhrama, The temple festival” and “Srishti Sambhrama the Earth Mother Festival”. Both are a celebration and a coming together of our cultural and natural heritage in hallowed sacred spaces of worship and learning. 1

The Gudiya Sambhrama is conducted across multiple temples each year in Bangalore between the period of January and February. The working committee of the Heritage Trust develops a theme for each year. Last year the theme for Gudiya Sambhrama was “Sacred Flowers”. The festival with theme 'Sacred Flowers' brought together over a hundred artists and scholars of repute from across the country. Starting in the month of January for five week-ends and 8 venues, 20 temples resounded with the rhythm of dancing feet and the melody of music mingling with mystical chants and

Each year Gudiya Sambhrama is growing in size and is offered free of cost to the audience. In a personal chat with the author, Smt. Vijayalakshmi explained with much enthusiasm the endurance and hardships they have faced while organizing these festivals. The Gudiya Sambhrama is held completely based on donations and contributions from likeminded people who believe in taking forward our Indic traditions and Temple culture. Every year the trustees of Heritage Trust plan the program of dance and music without much financial resources but believe that since the sankalpa has been made and is geared towards devotion and spirituality their financial goals will be met with.

Gudiya Sambhrama is conducted on the principles of environmental sustainability and all efforts are made to use recycled materials. Every year the trustees face a hard battle with local governing body which controls the Temples for request for access and permission to hold the festival. But Smt. Vijayalakshmi ji and her colleagues do not give up hope and pursue their dreams to the final goal.

The main goal of Gudiya Sambhrama is to inculcate a feeling of ownership of the Temples and oneness amongst all strata of the society. Towards this end every year the Trustees ensure that all people are participants of the festival- the flower sellers outside the Temples to the artiste and the audience all sections of the society are invoked with a sense of pride in their culture and traditions. The unique feature of 2017 was the inauguration of Gudiya Sambhrama at each venue by the regular flower supplier to that particular temple. The floral artist was felicitated and appreciated for the dedication to the temple. This was an effort to understand the important role that the floral artist plays in enhancing the experience of the devotee.

The Gudiya Sambhrama is spread across the Bangalore city over a period of 6 to 8 weeks. In 2017 it was performed at several locations across Bangalore - precincts of Gudada Ramanjaneyaswamy Devasthanam in Hanumanthanagar, HSR layout, Nandi Thirtha Devasthana in Malleswaram, Koramangala Ganapathi Temple and Banashankari.

Apart from the main stage performances artists performed inside each of the 20 temples as part of the sangeetha and nrithya upachara to the Supreme. This was the highlight of the utsava to bring back the devopacharas in the temple as this practice is slowly fading away. Artistes have found devopacharas inspiring and uplifting.

This year the Gudiya Sambhrama starts on January 27th and has an unique flavor to it. The Festival will also hold a week long program on Bhagvaata Saptha with daily upanysam by Shri Dushyanth Sridhar. The dance and music programs will be presented through the date across venues. A special highlight is Bhagvaata Chintanam to be held by Swamini Svatmabodhananda.

The Temple is a creation of an open Culture that recognises and understands the diversity of people's approach to the Supreme godhead. The ‘temple’ of the Vedic times was more the Yaaga Shala, the elements and Mother Nature and as the wheels of time turned, the temple of today has become more important. Indian culture stands unbroken and connected for thousands of years bringing forward time-tested practices and wisdom of centuries.

Indian culture recognizes that we are a part of all creation; plants, animals, the elements and the entire Universe. The, Vedas, Upanishads, Ithihasa Puranas, the Bhagavad Gita, and Smritis contain the earliest messages for preservation of environment and ecological balance. The philosophy of the rishis was born of deep meditation, research and understanding and not a superstitious primitive theology. The forests were their laboratory of learning and Mother Nature their teacher. Now is the time to bring forward the wisdom of the ancients that had established the harmony of man and nature hence the festival revolves around themes of our natural heritage.

The Gudiya Sambhrama is slowly becoming a flagship festival of the city of Bangalore, a Festival that the citizens can be proud of being associated with and spread the message of uplifting arts, culture and spirituality.

To know more about the organizers and the festival MyInd podcast will release a discussion with Smt. Vijayalakshmi soon.