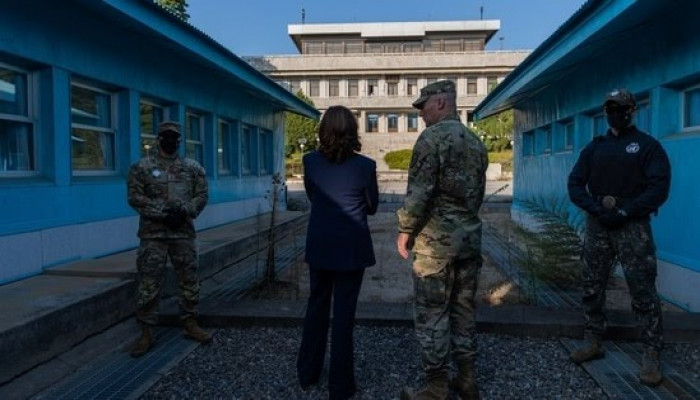 According to a Bloomberg report, Kamala Harris entered a hut from the South Korean side used for discussions that straddle the border with North Korea on Thursday, becoming the highest-ranking member of the Biden administration to enter the 4-kilometers wide buffer where hundreds of thousands of troops are stationed on their respective sides of razor-wire fencing in a place dubbed the Cold War’s last frontier.

She also stood on the South Korean side of the demarcation line border while North Korean soldiers kept close tabs. Before going to the DMZ, Harris held talks in Seoul with President Yoon Suk Yeol, where they denounced North Korea’s missile launches and pledged tough action if Pyongyang went ahead with its first test of a nuclear device in five years.

"The commitment of the United States to the defense of the Republic of Korea, I will report, is ironclad,” Harris said at the DMZ, referring to South Korea by its formal name and saying the North Korean launches were “clearly a provocation.”

She added the DMZ dramatically shows the paths the two Koreas took after their 1950-1953 war, with South Korea becoming a thriving democracy and North Korea becoming “a brutal dictatorship” with rampant human rights violations and an unlawful weapons program that threatens peace.

The DMZ visit offered the chance for Harris to show she can tackle delicate relationships abroad while burnishing her foreign policy credentials ahead of the 2024 presidential race. The visit also included meeting service members and receiving an operational briefing.

Her trip put attention on North Korea’s return to provocations and signaled support for allies in the region, including the two that host the bulk of US troops in the region -- South Korea and Japan.

Kim has ignored the US calls to get back to stalled nuclear disarmament talks and fired off a record number of ballistic missiles this year in defiance of United Nations Security Council resolutions. This includes the launch of two short-range ballistic missiles on Wednesday and a single short-range missile on Sunday -- the first such barrages since June.

North Korea has a habit of timing its provocations to political events. The latest launch also took place as the USS Ronald Reagan arrived in South Korea for joint drills and about a month after the US and South Korea held the Ulchi Freedom Shield -- their biggest joint military exercise in about five years. North Korea has bristled for decades at the joint military exercises, calling them a prelude to an invasion.

The vice president’s office quietly planned the DMZ visit over the past two weeks, according to a senior administration official, once it became clear Harris would travel to the region to attend the state funeral of former Japanese Prime Minister Shinzo Abe. But South Korean Prime Minister Han Duck-soo upstaged her office by announcing her DMZ stop at the start of their bilateral meeting in Tokyo.

“Your visit to the DMZ and Seoul will be very symbolic demonstrations of your strong commitment to the security and peace to the Korean Peninsula,” Han said to Harris on Tuesday.