Investigating the Charges of Bias 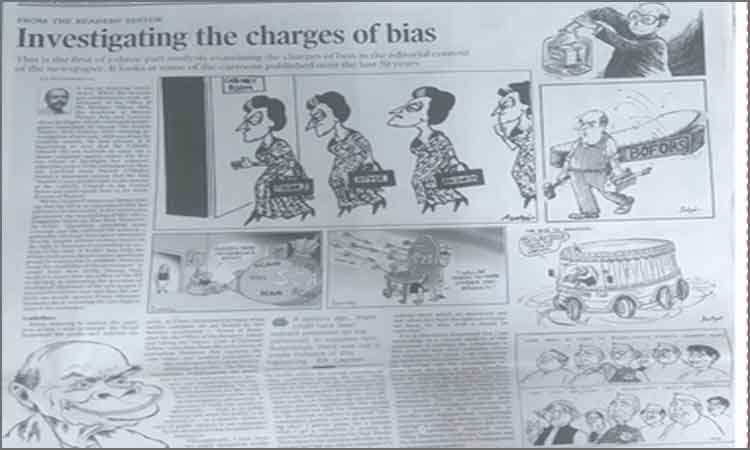 âInvestigating the charges of biasâ â screamed the op-ed page headline of The Hindu on March 7th. Just for the impact, look at the picture shown above of the newspaper that day.

The Readers Editor (RE) of The Hindu started a 3-series article on âInvestigating the charges of Biasâ on The Hindu. The RE is a concept unique only to The Hindu. The office of the RE publishes a âcorrections and clarificationsâ column for 5 days of the week, in which significant errors are rectified. For this, the paper deserves kudos. But this article is not about the functioning of the RE (if you are still keen on that, here are a couple of earlier articles and discussions I had with N.Ram on this).

In this first of the three part series of âinvestigationsâ, the RE has taken the side of the newspaper, by citing isolated examples of a few cartoons on all Prime Ministers. The RE tells us that, amongst other queries, he has ââ¦also received letters that said that the cartoons are mostly against Prime Minister Narendra Modi, revealing the ideological slant of the newspaper.â So in order to try to prove this wrong, the Readers Editor has chosen to take solace in the fact that The Hindu did publish cartoon against every Prime Minister.

And here is where, the RE has got the gist of the feedback, fundamentally wrong. I say fundamentally wrong, because it is not a daily occurrence that long time readers of the paper write in expressing their anguish. Fundamentally wrong because, by trying to focus on isolated articles on various governments, the RE (and The Hindu) is trying to duck the charge of being supremely biased against *this* Prime Minister.

Therefore dear RE sir, please allow me to make an attempt to help you in these âinvestigationsâ.

First, let us not dig way back into the past. Letâs just focus on the last one month. And allow me to borrow this from a disgruntled reader â âI do not have memories of reading anything other than The Hindu. Of late, in the wake of the JNU debate, Iâve found almost all the guest columns on the editorial/perspective pages to be biased. It is tiring to read about articlesâ¦â

The JNU coverage in your paper started on February 13th with the following front page article. 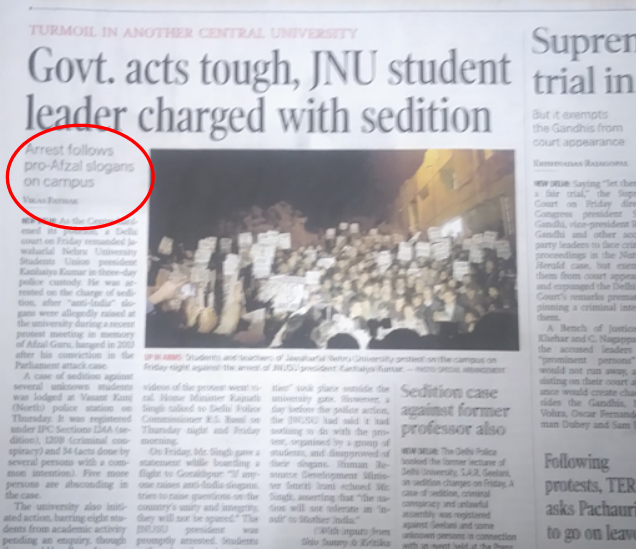 I highlighted the byline â âArrest follows pro-Afzal slogans on campusâ. This is simply not true â in other words, the paper is not giving out the actual slogans that were raised on the campus that day.

Slogans like âBharat ki barbadi tak jung rahegiâ, âBharat ke tukde tukde karengeâ, âTum kitne Afzal maroge, ghar ghar se Afzal niklegaâ, âAfzal hum sharminda hai, tere khatil zinda haiâ â And no, the last two slogans are not âpro-Afzalâ â they are a direct threat to breed more terrorists. So instead of presenting the readers with the true picture, the paper began their campaign in earnest. And the deluge that followed for the next 20 days is what made readers feel âtiringâ.

Dear Sir, the charge of bias is because of the following statistics. Almost every single day from Feb 15th, there was at least one article in the op-ed page that repeated only one argument ad-nauseum. Donât trust me? I am linking them all here for your reference.

You may retort saying that this is a temporary phenomenon. You may feel that perhaps the newspaper editorial team got carried away by what was happening. But then you also know that these kind of articles are not new â sample this article on Feb 2nd while talking about Rohith Vemulaâs suicide. Remember the coverage over Rohith, sir? I remember. And I do not recollect the newspaper mentioning and discussing Rohithâs comments on the chicanery of Sitaram Yechury. In fact, the editorial even told us that we should not take his suicide letter at face value. Or perhaps you should read this long article that analyses his suicide note, without even once mentioning ASA or SFI. And I keep wondering why? Why? Perhaps because of bias? There, I said it â the charge of bias! It is this coverage that is being questioned sir. It is because of this coverage that readers write in saying ââ¦but it does convey the impression of being against Mr. Modi.â

Alright, letâs wean away from these stale topics of intolerance, anti-nationalism etc. Letâs discuss about policy coverage. At this point, I would like to shamelessly plug two of my articles written in MyInd Makers.

In fact, I have submitted in writing to you an abridged version of the second article, and you have also forwarded to me the authorâs response (which is also put up on his blog) â but I still keep wondering â why was the clarification not published in the newspaper? And while I am wondering, all I can hear is one word â bias.

Perhaps I am boring you with too much of Narendra Modi and the BJP. So letâs move to a lighter topic â Rahul Gandhi! Time for another shameless replug â an article written by me in Niti Central. In this, I try to discuss in detail how The Hindu employs lovey-dovey language to cover the speeches of Rahul Gandhi. This is from July last year, and not something this year. Just so that readers donât have to click on multiple links, I will paste a collage of various reports, and a few snippets of The Hindu while writing ânewsâ. 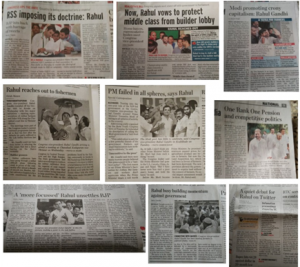 Do you see the pattern now, sir? Not only does the paper spend reams and reams to write against the NDA government, it also dedicates significant space and efforts to prop up the opposition leaders like Rahul Gandhi. Do you hear the scream of âbiasâ now?

And then there are the small things â on how Kejriwal gets prominent space in the Hyderabad edition; how Kejriwalâs title gains precedence over Arun Jaitleyâs; on how Yechuryâs rhetoric gets published in the op-ed page, but Arun Jaitleyâs response doesnât; on how the paper tries to tie itself in knots; on how P. Chidambaramâs response gains front page coverage; or when you choose to highlight madrassas over vedic schools.  I can go on and on about these small things, but I think (or I hope) that you get my point about why there is a charge of bias against the paper. And given my hope, I will also not talk about the pre-election coverage of Mr. Modi.

Sir, in your very first article, you have given us a glimpse of what to expect in your next two series, by saying this â âGiven the limitations of space, I am restricting my analysis of the cartoons, the editorials, the reportage, and the investigative reports from the days of Indira Gandhiâs prime ministership.â

Iâd doubt if anyone is accusing the Hindu of not writing a single article against any other Prime Minister. The charge of bias is because of the consistent negative coverage of *this* government â any small thing that might show *this* government in bad light is prominently highlighted. What else explains the front paging of a report like this?

So for you to pull out a few excerpts from old articles/editorials/investigations related to earlier Prime Ministers will not assuage the feelings of long time readers. There are a couple of articles in the paper that praise Modi too. Just last week, a full page analysis of his foreign policy was published. You know what sir, I almost didnât read it, thinking it was another tirade!

Please donât get me wrong sir â because there is nothing wrong in being biased. Being biased essentially means one has made a choice, and can be bold enough to accept the choice. But to claim to be neutral when a barrage of evidence exists against that claim, will only invite a response like this â âThe laboured attempt by The Hindu to explain its impartiality is like someone taking a selfie.â

I am an avid reader of the newspaper for more than 20 years now. I recommend the newspaper for students for the science coverage; for the language. And I want to help remove this charge. I hope my references and analysis have helped you a bit in your investigations. I hope your investigations will help this senior citizen change this view of his - âBeing an octogenarian reading the paper for decades I have no doubt that The Hindu has veered steadily away from the ideal of fair reporting and contracting views. The anti-Modi stance is glaringly evidentâ¦â

Before I sign off, one last thing Sir â I have even written to you multiple times asking for a clarification on an important topic, which is summarized in the graphic below. If any small run BJP leader would have written something like this, I am sure the paper would have been on the forefront demanding explanations from the Prime Minister. Is it possible to get a response on this please? 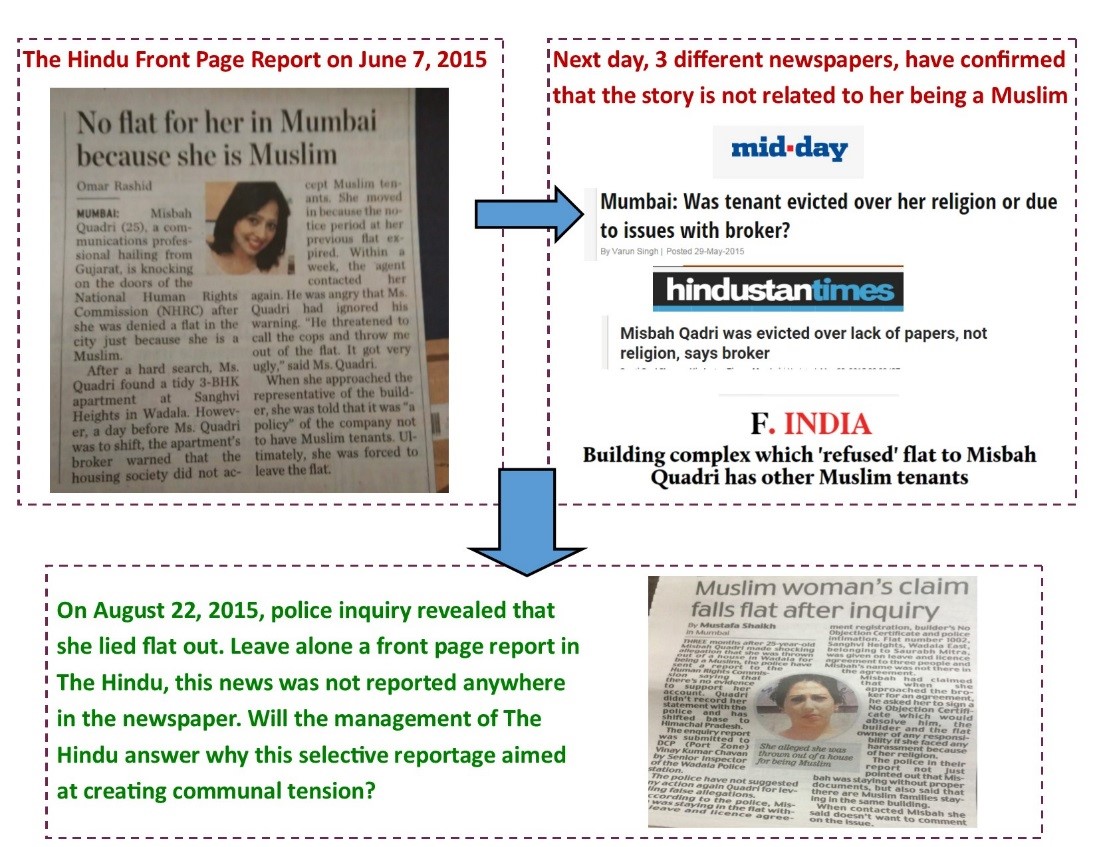