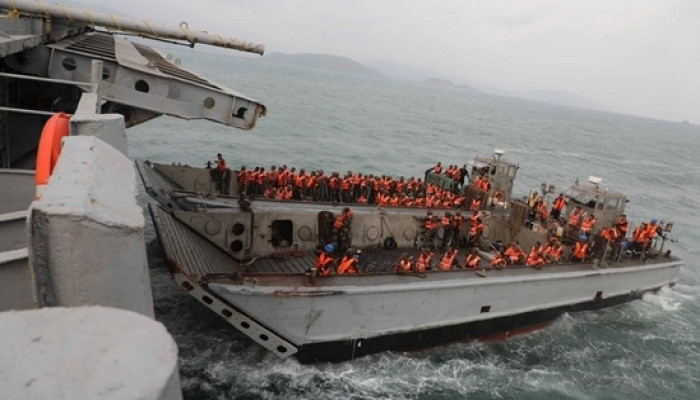 Indian Navy’s largest troop carrier INS Jalashwa has carried out joint amphibious drills in the Gulf of Kachchh or Kutch off the coast of Gujarat involving troops from the Indian Air Force and Indian Army.

"The deployment of INS Jalashwa exemplifies the navy's cross-coast deployment philosophy of operating warships across the coastline and the Indian Ocean Region to protect India's maritime interests and enhance national security," ANI quoted an Indian Navy as saying.

INS Jalashwa, an amphibious transport dock, along with six Sikorsky SH-3 Sea King helicopters were procured from the United States by India in 2005. It was commissioned on June 22, 2007.

An amphibious transport dock, alternatively known as a landing platform/dock (LPD) is an amphibious warfare ship capable of embarking, transporting and landing elements for expeditionary warfare. These types of ships are designed for transporting troops into a warzone by sea primarily sing landing craft although transport helicopters are also used

INS Jalashwa is the only Indian Naval ship to be acquired from the United States. It is based in Visakhapatnam under the Eastern Naval Command.

On Sunday, the fourth edition of the Indian Navy-Bangladesh Navy Coordinated Patrol (CORPAT) commenced. Sharing photographs of Indian warships that will take part in this exercise, the Navy tweeted, "Strengthening mutual understanding and enhanced interoperability between both navies in countering transnational maritime threats at sea."

The patrolling drill commenced in the northern Bay of Bengal and would continue between May 22 and 23.

Maritime Patrol Aircraft of both navies will also undertake joint patrol along the International Maritime Boundary Line (IMBL) during CORPAT.