India, Israel, U.S and UAE to hold a virtual meet to strengthen ties 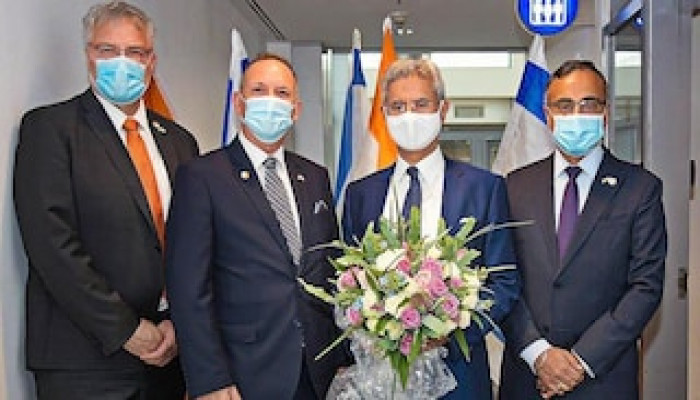 A virtual meeting will be held among foreign ministers of India, Israel, the United Arab Emirates, and the US on Monday at 10:15pm IST to boost cooperation and coordination.

Jaishankar and Israeli Foreign Minister Yair Lapid will hold a meeting from West Jerusalem with US Secretary of State Antony Blinken and UAE Foreign Minister Sheikh Abdullah bin Zayed Al Nahyan, who will join them virtually.

According to the office of Israeli Foreign Minister Yair Lapid statement, this meeting comes as a crucial part of the Israeli government’s efforts to build strong international relations that should strengthen its position in the region and in the world. It will also contribute in offering a strong and smart push for the peace process between Tel Aviv and its neighbours.

Now after this meeting, they can work together on various fronts like security, Iran, technology, trade, climate change.

“The outcomes of the meeting of HH Sheikh @ABZayed with the Ministers of Foreign Affairs of the #US and #Israel, were remarkable and important, including the announcement of the two working groups "Peaceful Coexistence" and "Water and Energy" between the three countries,” Ambassador Mohamed Al Khaja, UAE’s envoy to the US wrote in a tweet.

Israel’s foreign minister wrote, “At the center of my visit here is the concern about Iran's race to a nuclear capability. Iran is becoming a nuclear threshold country. Every day that passes, every delay in the negotiations, brings Iran closer to a nuclear bomb.”

He went on to add, “I don’t want to conclude with fear, but with hope. We are writing a new chapter in our history. There is an alliance of moderates. Focused on life, focused on hope, focused on optimism, focused on looking forward.”