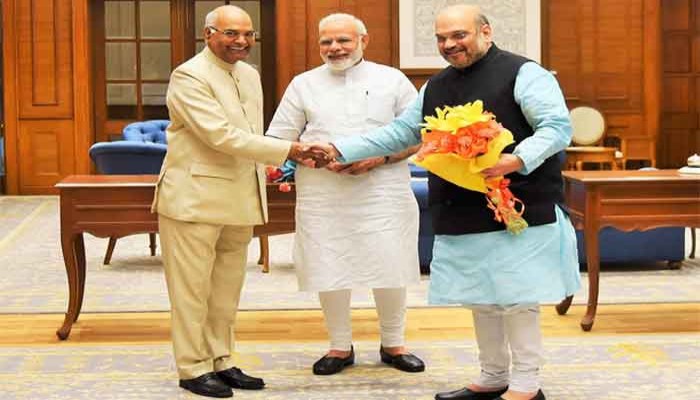 It’s been a couple of days since Amit Shah announced the name of Shri Ramnath Kovind as NDA’s candidate for the post of President of India. Since then the English media went into a tizzy. Leading the way was The Wire, edited by the controversial journalist Siddharth Varadarajan.

Let’s begin with their most popular and profound analysis – “Kovind’s past as a defense witness in the Bangaru Laxman corruption case is at odds with the BJP’s official position on corruption.”

The basis of this conclusion is evident from their headline below:

This news item was used by Congress handles, extensively on social media. Let’s take a look at what Shri Ramnath Kovind actually said (I didn’t have to do any research for this. I just had to bother to read the links provided in the article!).

How does merely appearing as a defense witness, and stating general facts and an even more generic opinion on the nature of a person, amount to being “at odds” with official position of the party? It is one thing for political parties to put forward such childish arguments, but for the media to go overboard is amusing.

Not happy with a mere court appearance, The Wire brings in a bigger fish – WIKILEAKS!

The author of this piece in The Wire reaches an awesome conclusion based on these “wikileaks” – “Kovind toed the the Sangh parivar’s political line, which prefers reforms in the caste hierarchy as entrenched in the Hindu puranic system, instead of a complete annihilation of caste as advocated by Indian leaders like B.R. Ambedkar.”

Wikileaks, are documents written by US officials, to their higher officials in hierarchical chain. Let’s see what they have to say about what Kovind’s views are:

One would assume that the gang might pick up the last argument – the BJP favors reservations in private sector! Instead, all they chose to focus is that Kovind’s views match with Sangh parivars’. And if the above arguments are indeed Sangh Parivar arguments, can someone please enlighten as to what is exactly wrong in them? (Except of course the reservation in private sector).

Actually, The Wire started their series of articles with the this heading:

Oh boy, the language! Modi must flaunt “socially inclusive” credentials – what kind of days have befallen on us, that Prime Minister who himself has risen to position from acute poverty, has to find somebody to “flaunt socially inclusive credentials”! We are also told that – “in 2010 he was quoted by IANS as saying Modi was a “law-abiding chief minister” and the party “was proud of him” –“. What is this with Ramnath Kovind toeing the party line every time he speaks? Surely such a bad quality to possess!

And as usual, they also use the garb of “sources” to say whatever they want. Sample this – “”He has proved himself to be a pliant man in the party, something which the Union government wants in the top constitutional post,” said the BJP leader, who did not wish to be named.” So, for all that we know, this is the author’s view and he might be simply dramatizing it!

All that the media has could find on Shri Ramnath Kovind is that he deposed as a witness; a mis-quotation, and mention of his name in wikileaks documents!

Through Social media we also came to know now that the English media never wanted to take any byte from Shri Ramnath Kovind.

If these are his only shortcomings in all these years of public life, then Prime Minister Modi must be commended for making an excellent choice for the President of India!