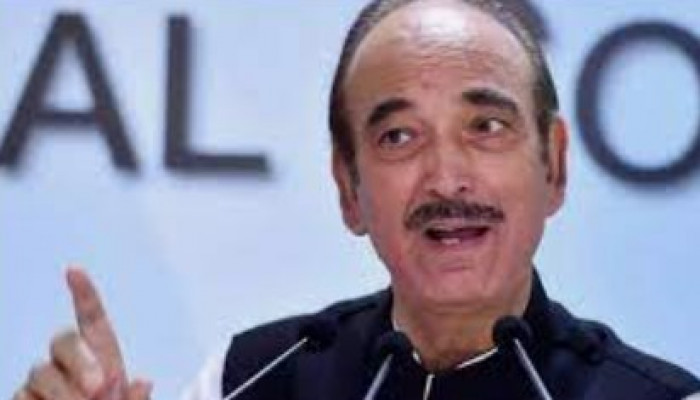 Ghulam Nabi Azad made a statement on Wednesday that Congress has no guarantees of winning 300 seats in the 2024 Lok Sabha elections. He also said that only the Indian Supreme Court can decide what should be done about Article 370, which was abrogated by the Indian Centre in 2019.

"Only Supreme Court can decide on Article 370 and other than SC only ruling government can do it. The current government has abrogated it, how will it take that back? And I cannot assure you that Congress will win 300 seats in the 2024 polls. I pray that Congress wins 300 seats but I can't see it now," Azad said.

On 29th of November, the senior congress leader had also stated that there was no point for the Opposition to raise the issue of Article 370, as they have already raised it in Parliament for two years. Moreover, he reaffirmed his demand for the restoration of Jammu and Kashmir's statehood, which has been divided into two Union Territories - Jammu & Kashmir and Ladakh.

“There’s no point in raising Article 370 which we have raised in Parliament for 2 years. Govt has conceded nothing but Statehood. Our demand is restoration of Statehood and conduct of elections in J&K without any delay,” he said.

Omar Abdullah, the former chief minister of Jammu and Kashmir, attacked Azad and alleged that the former prime minister "Jawaharlal Nehru" was behind Article 370.

“Article 370 is a legacy of the Congress. If Congress is not ready to save its own legacy, how can they save others,” Abdullah said. “The hearing is yet to commence in court. And we feel that our case is very strong. But these people have already conceded defeat and said that it is futile to talk about this."

However, Azad clarified his statement by saying that statehood in Jammu and Kashmir must be restored. He also slammed the media for allegedly misquoting him earlier.

Azad stated, "Some sections of the media tried to misquote my speech in Kashmir. Let me make it clear – we have a united, single stand on the August 5 decision. The decision has led to widespread public dissatisfaction in Jammu as well as Kashmir. The unemployment rate is sky-high. Tourism is finished. Instances of militancy have gone up. We want an end to the problems faced by the public. Statehood must be restored, an early election held next year and the jobs/land act brought back."

In August 2019, both Houses of Parliament passed requisite legislation, resulting in the effect of virtually repealing Article 370. Consequently, Jammu and Kashmir's special status was abolished. In addition, the region was divided into the Union Territories of J&K and Ladakh. The state then imposed restrictions on the movement of people and communications, which gradually loosened over time.