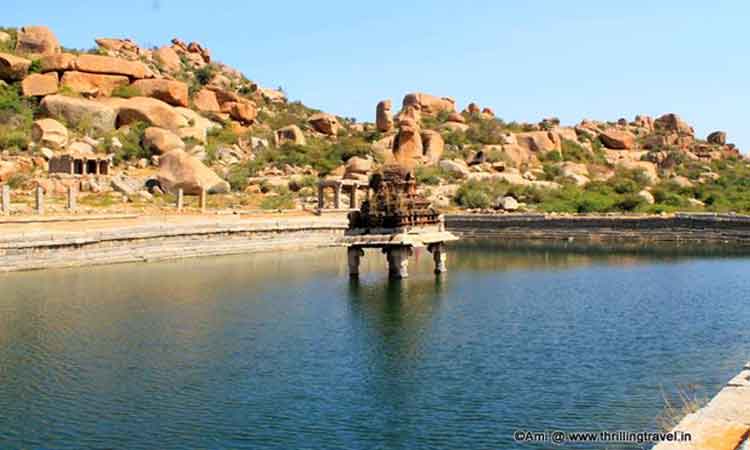 Amongst all the lovely monuments in Hampi, I found the Vittala temple to be the most fascinating â one that I feel I did not have enough of, one that I would love to go back and explore all over again. Known as a temple with musical pillars, I feel there is a lot more to temple. I suppose, even the tourism department feels the same way given the special care that they are taking to maintain and restore this piece of architectural excellence.

As we parked our vehicle at the temple, we realized that we either have to walk a kilometer to the temple or take one of the battery operated vehicles right up to there. Given the time of the day and the heat, we opted for the latter, thanking ourselves later that we had taken only a one-way pass to the temple and not a return. The reason for the same being the entire stretch of the approach road has some relics of the past which you can explore when you walk down the path. Take for instance, this beautiful Pushkarni. The center of the same had this amazing structure, the beauty of which was enhanced by the blue waters of the temple tank. Built for a bath before entering the temple, it is said that this tank was also, used during festival celebrations like holi.

Besides the Pushkarni, I could see rows of pillars â some standing and some fallen, all there to indicate the presence of an erstwhile bazaar or marketplace. The sheer number of shops that you can imagine here makes you realise what a hustling and bustling area this must have been. On the side opposite to the Pushkarni, you will also, spot some smaller shrines of temples dedicated to Gods. 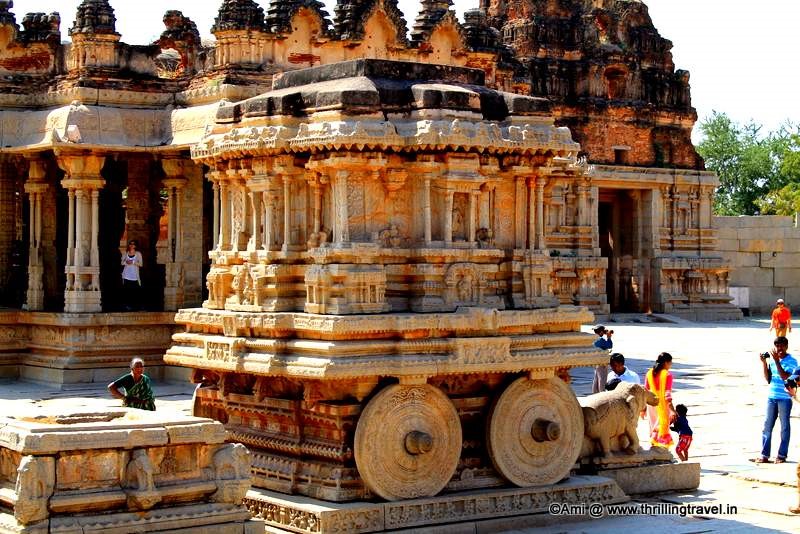 The entrance to the main temple is partially destroyed. But this is not to say that the beauty of the same is diminished in any way. The impressive carvings on the temple gate are just the beginning to what you are going to encounter as you enter. The first thing that you see as you enter is the gorgeous chariot, dedicated to Lord Garuda. The Stone Chariot is said to have moveable wheels which today have been sealed to prevent wear and tear. The structure from every angle is exquisite with different stories etched on it in the form of carvings.

Our guide told us that originally the Chariot was affixed to two stone horses, which were destroyed. Today the same have been replaced by two elephants â which are actually a part of some other structure in Hampi but have been added to the Stone Chariot now. You can spot the remnants of the original horses in the same place where these two elephants kept. You can actually walk around to the front and try to spot the hind legs of the two original horses.

Another fascinating fact that was told to us is that this temple had an idol of Lord Garuda and the same was worshipped. However, this shrine is empty today and the idol missing. To worship this shrine, a stone ladder was kept and again you can spot the broken parts of it near the newly placed elephants. 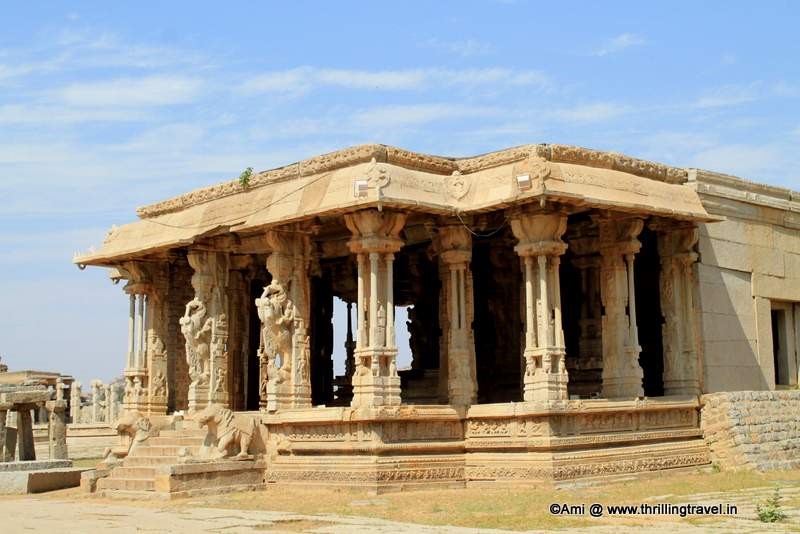 If you are facing the chariot from the front, on the left is another temple. This is not the main temple but is equally fascinating. The entrance to the same has pillars with horses carved on them while a pair of elephants greets you at the entrance. I would say that this mantappa is a preview to what the main Vittala temple has to offer. It is said that the pillars in this temple also, have acoustic qualities, however, since tapping the pillars is prohibited, I could not test the same.

On the exactly opposite side of this small temple is another mantappa, known as the Kalyana Mantappa or the marriage hall. Here too, there are no major shrines but lovely pillars that awe you with their beautiful carvings. 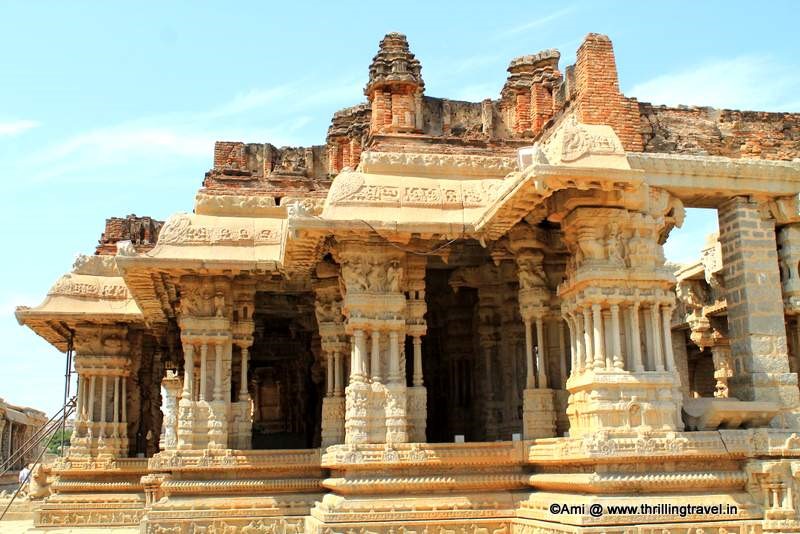 The main temple or the Maha Mantappa is a story in itself. The part facing the Stone Chariot is where you can see carved pillars depicting sounds of different types. You see horses on one, drummers on another and men with flutes on yet another. Our guide told us that each sculpture was representative of the sound made by that pillar when tapped. The one with the horses made the sound of gallops while the drums naturally, produced the drum notes. This part of the temple was used as a hall for temple dance and music. In olden days, they say that the sounds produced by these pillars were heard at least a couple of kms from the temple. 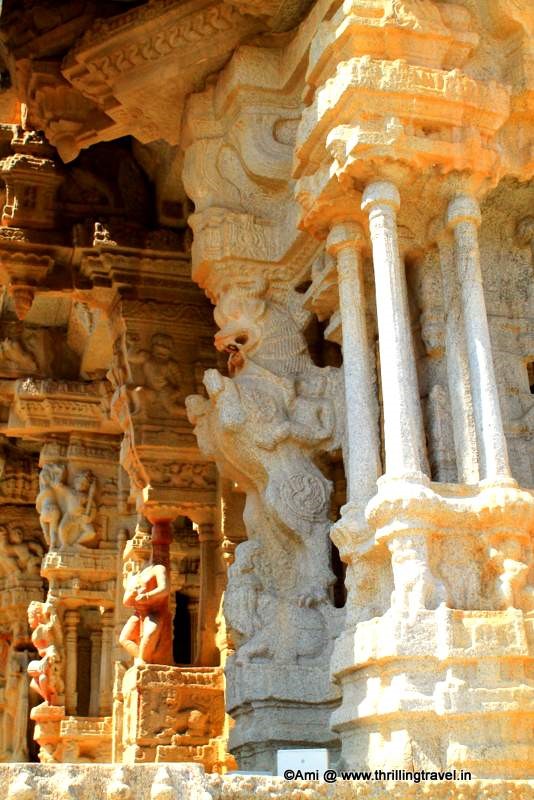 While the musicians played sounds on these pillars, a cloth was said to have been hung around them to cover and get better sound quality. The center stage of the mantappa was used by dancers to perform to the sounds made by the musicians. Whether this is true or not, remains a mystery but the story definitely adds to the flavor of the place.

It is also, said that the pillars are not hollow. This was tested by the British when they discovered the temple. Two of the pillars were cut open but they could not fathom how the sound was produced, for the insides were as solid as the outside. In a bid to preserve the rest of the temple and its glory, today, no tapping or touching of these pillars is allowed. You can just admire the same from afar and revel in the story behind them.

Moving further on, on one side of the temple, you will find a small miniature shrine. As per the guide, it served as a working model or prototype for the rest of the temple to be built. The corners or the various platforms of the main temple have carved animals on them. Each corner looks like a different animal when viewed in  different angles. The guides call them as -  two in one, three in one and four in one carvings, depending on the number of objects you can spot from different angles. Check out the picture below â I have clicked it from different angles to show you how different each look. Can you guess the 4 animals here? 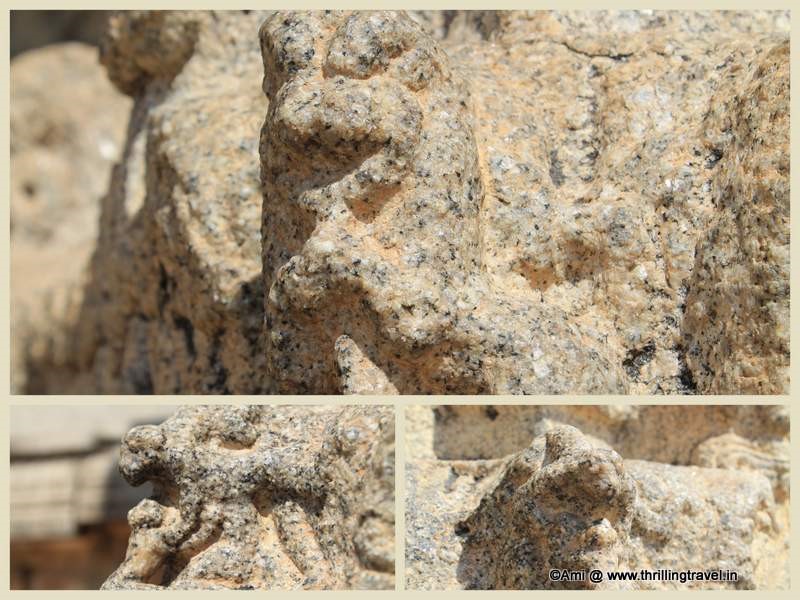 The inner sanctum is said to have had a huge idol of Lord Vishnu. However, the same no longer is present. You can see some other idols of Lord Vishnu and Mohini â each promising to leave you spell-bound and awestruck with their perfect carving and form. With this, we exited the temple, exploring the smaller shrines along the way as we made it back to the parking area.

There is so much to see and absorb in this temple that for me, I felt that the few hours that I spent here did not do justice to my visit here. I hope to be back at Vittala temple and explore it all over again â so that I take in what I could not the last time and add them to my memories of this amazing monument. 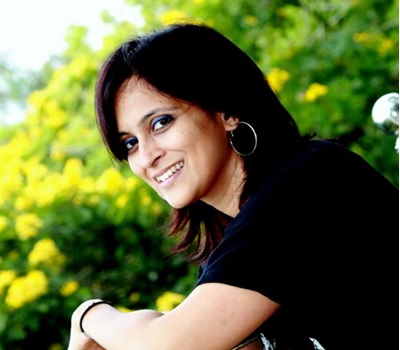