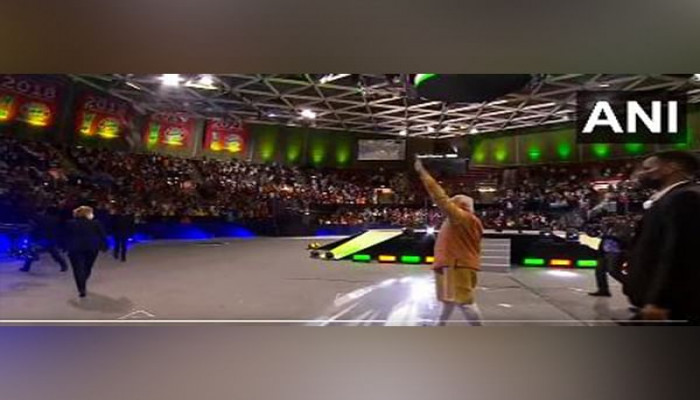 It is the largest gathering of the Indian diaspora in Germany post-pandemic. Most of the people came dressed in traditional attire.

Earlier in the day, PM Modi received a grand welcome from the Indian diaspora at the Hotel in Munich on Sunday where he will be staying during his trip.

"Bharat Mata ki Jai” slogan reverberated at the hotel premises as people from the Indian diaspora cheered and waved their flags seeing the Prime Minister.

PM Modi arrived in Munich today to attend the G7 summit where he will hold meetings with G7 and partner countries and will hold discussions on issues ranging from environment, energy, to counter-terrorism.

He was welcomed by a Bavarian band on his arrival in Munich.

The G7 Summit invitation is in keeping with the tradition of strong and close partnership and high-level political contacts between India and Germany.

“Forty-seven years ago, an attempt was made to hold that democracy hostage and crush it. Emergency is a black spot on India’s vibrant democracy,” Modi, who is visiting Germany to attend the G7 Summit, said, targeting the Congress Party.

“We Indians feel proud of our democracy wherever we live. Every Indian can say with pride that India is the mother of democracy,” Modi said.

Speaking on climate change, the PM said "Climate change is just not a matter of policies in India. Sustainable climate practices have become a part of the lives of India's people. We have made over 10 crore toilets in the country. Now people understand their duty to keep the country clean."

"Today, every village in our country is open defecation free, has electricity and 99% of the villages also have clean cooking fuel. India is providing free rations to 80 crore poor people since the last 2 years. In India now we have a unicorn every 10 days."

"In last century, Germany & other countries took benefit from the industrial revolution. India was a slave back then that's why it couldn't leverage benefits. But now India will not be left behind in the 4th industrial revolution, it's now leading the world. There was a time when India was nowhere in the race of startups. Today, we are the third-largest startup ecosystem. Similarly, we used to import even the simplest phones, today, we are the second-largest mobile phone manufacturer in the world," the PM said.