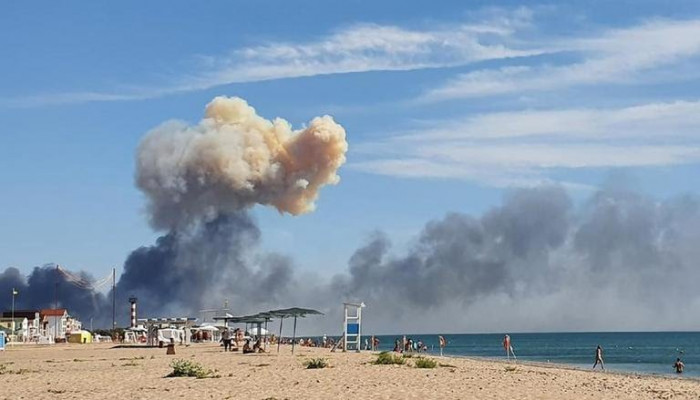 Authorities have declared a state of emergency in Russian-controlled Crimea following explosions at a Russian airbase, The Kyiv Independent reported. One person was killed and 14 others were injured after the explosions rocked an airfield in Crimea's Novofyodorovka settlement on August 9. Authorities concerned were investigating to find the cause of the explosion.

Crimean head Sergey Aksenov said that one person was hospitalised while the rest of them were at their home as they suffered "injuries of mild severity," TASS reported. Aksenov said that the authorities continue to provide assistance to the people. He further stated that the family of the deceased was not in the region and they were trying to contact them. On August 9, the Russian Defence Ministry said that explosions were reported on the Saki Novofyodorovka in Crimea. The ministry further stated that the equipment of the airforce was not damaged by the explosions.

The explosion caused huge plumes of smoke to rise into the air and tourists to flee the area. Crimea's head Sergey Aksenov said around 250 people were evacuated and moved to temporary housing after dozens of apartment buildings were damaged, according to an AP report.

Russian authorities further stated that the hotels and beaches were not affected by the explosion. On August 9, Sergey Aksenov in a Telegram post said that he went to the site of the explosion and authorities have cordoned off the region within five kilometres radius of the base. Notably, the military airfield Saki near Novofedorovka has been used by the Russian Defence Ministry.

Meanwhile, the Ukrainian air force has claimed that nine Russian warplanes were damaged in explosions that took place at an airbase in Crimea, according to AP. The statement of the Ukrainian airforce comes after Russia denied any aircraft damage in the blasts. Meanwhile, Ukrainian President Volodymyr Zelenskyy said that Russia's war began with Crimea and it needs to end with the liberation of the region. In his nightly video address on August 9, Zelenskyy called the presence of Russia in Crimea a "threat" to entire Europe and global stability. He underscored that the Black Sea cannot be safe until Crimea remains "occupied."

"This Russian war against Ukraine and against entire free Europe began with Crimea and must end with Crimea - with its liberation. Today it is impossible to say when this will happen. But we are constantly adding the necessary components to the formula of liberation of Crimea," Volodymyr Zelenskyy said in his video address.